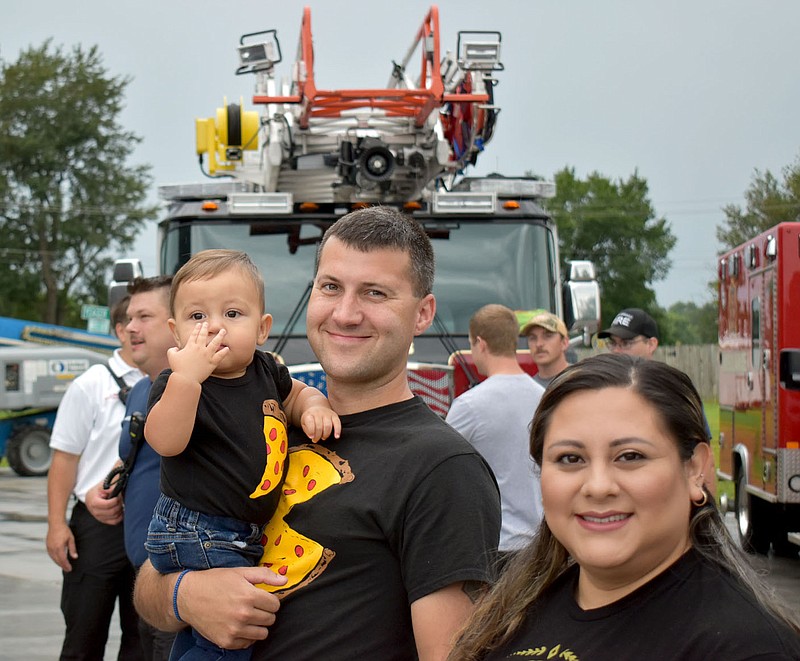 Ethan Griggs (left) attends a Siloam Springs Fire Department event last year with his parents Capt. Zach Griggs and Jennifer Griggs. Ethan is in need of a kidney transplant, and his dad is a match. (Courtesy Photo/Heidi Duhacheck)

Ethan Griggs of Siloam Springs is not quite 2 years old, but he needs a new kidney.

The good news is the toddler's dad, Capt. Zac Griggs, who has served as a firefighter and paramedic for the Siloam Springs Fire Department for the past six years, is a match. Surgery for the transplant from father to son is scheduled for Nov. 12, according to Heidi Duhachek, spokeswoman for the EthanStrong Campaign, which is helping raise money for the family's expenses. The campaign, organized through the Children's Organ Transplant Association (COTA), kicked off in September.

Ethan was a healthy baby for his first year of life until November 2019, at age 13 months, he went into septic shock, which caused cardiac arrest, a colostomy and multiple organ failure, according to his story, posted on his COTA webpage.

Ethan and his parents spent the first few months of his illness at Arkansas Children's Hospital in Little Rock before he was medically flown to Omaha, Neb., for further treatment. During his time in Nebraska, Ethan was in the intestinal rehab program, and the remainder of his intestines began working again. His life improved, with his liver healing completely in March, and he was discharged in February to continue outpatient dialysis in Arkansas.

Unfortunately, the only pediatric dialysis unit in Arkansas is at Arkansas Children's Hospital in Little Rock. At first, the Griggs family found a place to stay at Glory House Foundation, but with Zac traveling for work, Jennifer pregnant and a sick toddler, coping while away from their support system made them decide to move back to Siloam Springs and commute to Little Rock three days a week for dialysis. Gas alone for the trips costs $400 a month.

"We were excited because it almost seems like there is a little bit of light at the end of a tunnel," Zac says.

When Zac found out his son needed a new kidney, he knew right away he wanted to donate, he says. Typically, once a patient is on a transplant list, there is a three- to five-year wait before they receive an organ, unless a family member is a match, he says.

The family is excited but also a little scared as the transplant is becoming a reality with surgery scheduled in the near future, Zac says.

"As a parent, you want what's best for your child," he says. "We were out of options, and transplant is the best option."

A transplant will hopefully allow Ethan's body to operate as close as possible to the way it would naturally, rather than being hooked up to a dialysis machine three times a week, he says.

Ethan will spend two weeks in the hospital for the transplant, and the Griggs family will need to spend at least six to eight weeks in the Omaha area, including both Thanksgiving and Christmas, Jennifer says.

Ethan will continue to need medical support throughout his life, his parents say. Kidney failure affects the taste buds, so patients stop eating and lose weight. Ethan is currently fed formula through a nasogastric tube. His parents are hopeful that with speech therapy and continued work, he will be able to eat by mouth, Jennifer says.

Ethan will also need anti-rejection medicines for the rest of his life, at an estimated cost of up to $2,000 a month, Jennifer says. Pediatric patients are expected to keep a kidney for 10 to 15 years, so at some point in his life he will probably need another transplant, she says.

Jennifer says the couple have learned a lot about living organ donation through the process. She hopes their experience will raise awareness and educate people about the possibility of organ donation to save someone's life.

Even though she wasn't able to donate to Ethan because of her pregnancy, Jennifer went down to the Department of Motor Vehicles to register as an organ donor, she says.

The fire department family, community and family members have come together to support Ethan and his parents, starting when Ethan was first admitted to the hospital last November, Zac and Jennifer say. People have helped out however they could, from offering to mow the family's yard to keeping Ethan on their prayer list.

"I'm thankful that a lot of people are willing to come together to pray for someone they don't know, to help," Jennifer says. "We feel blessed and loved."

The Kickstarter fundraising campaign, which has a goal of $40,000, was officially initiated on Sept. 12 because the number 12 is special to Jennifer and Zac, Duhachek says. Ethan will celebrate his second birthday on Oct. 12, and his transplant is scheduled exactly one month later on Nov. 12, she says. The family will need to make preparations to make sure their bills are taken care of while they also make plans to have someone available to take care of Zac post-surgery while Jennifer is in the hospital with Ethan, she says.

As part of the campaign, Duhachek asked people to make contributions to the campaign in multiples of $12, whether it is $12, $24 or $144, she says.

"Any amount will make a big difference and will help ease the financial burden on the family," she says.

The Siloam Springs Local Firefighters Association is also hosting a golf tournament to help raise funds for COTA in honor of Ethan. The tournament will begin at 9 a.m. Nov. 7 at The Creeks RV and Golf Resort in Cave Springs. For more information, call (501) 712-3171.

COTA helps children and young adults who need a life-saving transplant with fundraising and family support, according to the organization's website. One-hundred percent of contributions made through the nonprofit help meet transplant-related expenses and are tax deductible, it states. Money donated will go into an account for Ethan that he can use for the rest of his life, Duhachek says. 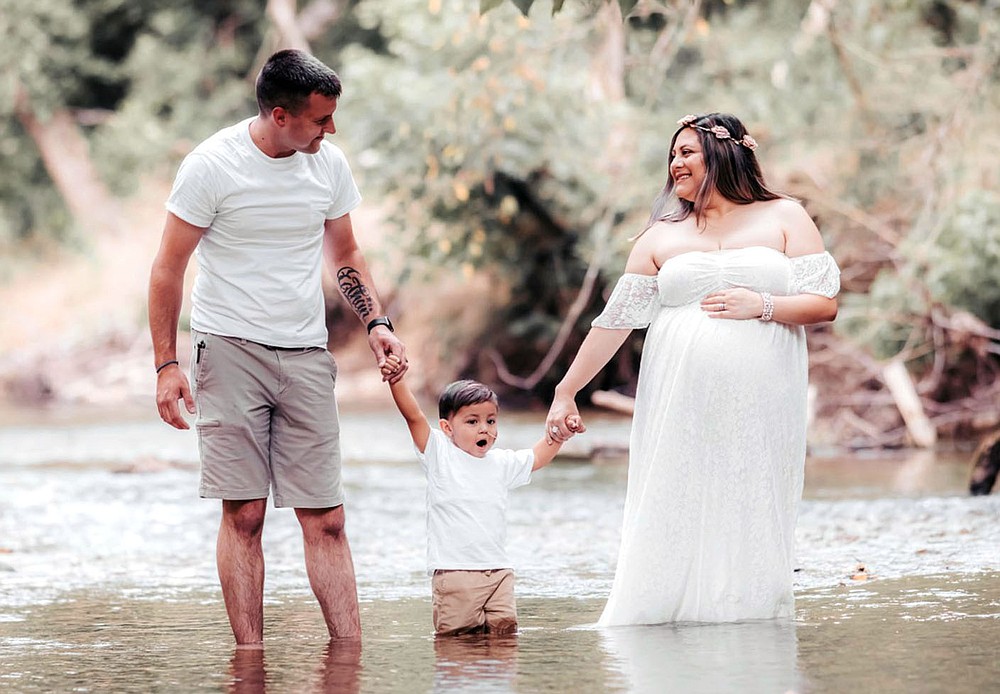 Ethan Griggs (center) plays with his parents, Zach and Jennifer Griggs. Ethan will get a new kidney from his dad on Nov. 12. (Courtesy Photo/Deanna Larkin, Larkin Photography)
More News

• Donate to Ethan through the Children’s Organ Transplant Association at cota.org/campaigns/COTAforEthanStrong.

• To learn more about becoming an organ donor, visit organdonor.gov.

Janelle Jessen is a reporter for the Siloam Springs Herald-Leader. Email her at [email protected]