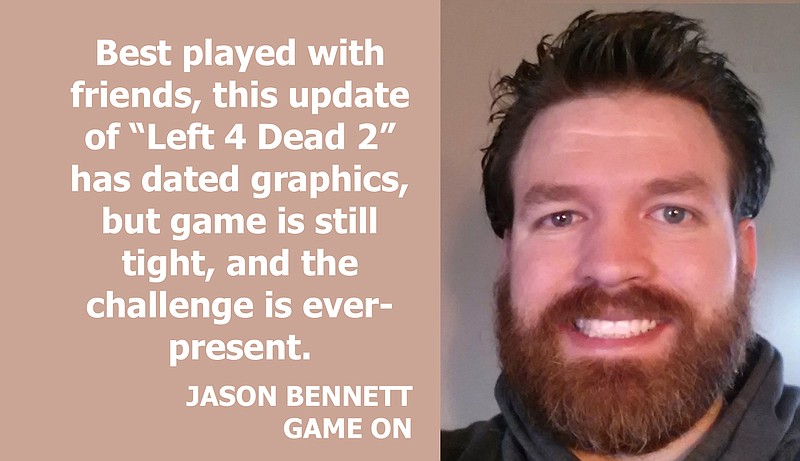 Of the many surprises 2020 has brought, getting a major update to Left 4 Dead 2 was not anywhere on my radar. A multiplayer survival horror game released in 2009, its most recent update had been about eight years ago.

It's also a game I spent countless hours playing on the Xbox 360, but now I own it for the PC, too, since this final update is Windows only.

Was developer Valve secretly working on an update to a decade-old game? No such luck. This overhaul was actually created by the L4D2 fan community, through the work of modders who pore through game files and code, using and reusing various bits to create new content.

But because it was so well done, it received Valve's blessing and has been released as an official update.

What was added? The biggie is "The Last Stand," a brand-new campaign based on a Survival map of the same name in L4D1. Also added are 26 Survival maps, 4 Scavenge maps, two melee weapons, new animations, previously unused dialogue and a ton of bug fixes, user interface fixes, player-vs.-player balancing and more.

[Video not showing up above? Click here to view » https://www.youtube.com/watch?v=wJMF-zxgbLc]

Campaign mode follows the attempts of four survivors of a zombie apocalypse to flee Savannah, Ga. They make their way to the top of a hotel to hop on a rescue helicopter. Unfortunately, just as they make it to the roof, the helicopter flies away and they must fight their way through zombies and out of the hotel, through the city and to New Orleans.

Campaign mode can be played in multiplayer mode or in single-player, where the game's artificial intelligence controls the other three characters. If fewer than four players are together, an AI will control the remaining characters.

Much as in any zombie movie, the streets, sewers and countryside are crawling with the infected, which upon noticing the players will immediately sprint toward them and attack.

Among the many types of zombies are Special Infected, which can quickly incapacitate and then kill players unless those players are helped immediately by an ally.

Where L4D2 really shines is in its Versus option for game modes. Instead of four players going up against an enemy AI, it's four human players versus four human players who control the Special Infected. And throughout such events, players still must battle waves of regular zombies.

Coordinated attacks by Special Infected can be fatal because if all survivors are incapacitated at once, everyone dies.

It's incredibly fun to play as the Infected. There's always one guy on the opposing team who wants to make a mad dash for the safe house and gets separated from his teammates. Just as in every horror movie, anyone who gets separated from the others is a goner.

In Versus Campaign mode, each Campaign map is played twice, and the opposing teams each take a turn as the Survivors and as the Infected and compete for the highest overall score. This kind of asymmetrical player-versus-player action was pretty groundbreaking at the time and is difficult to balance, but L4D2 really gets it right.

In the Survival game modes, there is no escape. Instead, survivors are on a limited map and fight wave after wave of Infected, with the goal being to survive as many waves as possible and beat earlier high scores.

Scavenge is a 4 vs. 4 challenge about collecting fuel cans to fill up a power generator — while fighting off hordes.

There are also 30 "mutations" that can be played that change the rules, such as "health constantly drains" or enemies are deadlier. There's also a Realism mode, which removes video-game aspects such as glowing outlines around other players, and there are interactable items like guns, along with various difficulty levels.

Expert Realism mode is incredibly punishing without the most in-sync team.

L4D2 is best played with friends, as public lobbies can be problematic. Not everyone uses a microphone; sometimes people quit partway through; sometimes they're just bad teammates. The graphics are indeed a little dated, seeing as the game is a decade old. But they are serviceable enough.

The gameplay is still tight, and the challenge is ever-present. The game is old enough that it often goes on sale, and every once in a while, the publisher just gives it away for free — although currently, it's $9.99 on Steam.

It's a classic that should be in just about everyone's library. Except kids.

Rating: Mature for blood and gore, violence, and language