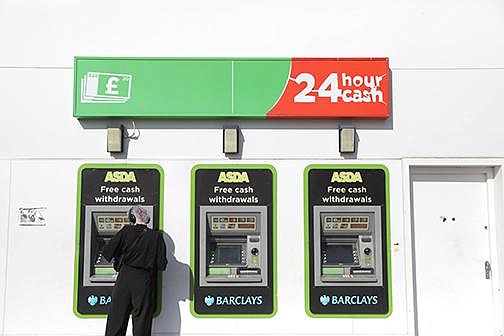 A customer uses an ATM at an Asda supermarket in London earlier this week. Walmart’s deal to sell the Asda chain still requires the approval of British regulators. (Bloomberg News/Simon Dawson)

Walmart Inc. has found a buyer for a majority stake in its U.K. unit, Asda, a year after a failed attempt to sell it to a rival chain fell through.

The Bentonville-based retailer said Friday that it had reached an $8.8 billion agreement with an investor group consisting of private equity firm TDR Capital and brothers Mohsin and Zuber Issa, co-chief executives of convenience-store and gas-station chain EG Group.

Walmart will retain a minority stake in Asda and a seat on its board of directors. Asda chief executive Roger Burnley will continue to lead the company.

Judith McKenna, president and chief executive officer of Walmart's international division, said Walmart believes the deal will bring "a new entrepreneurial flair, not only to Asda, but also to U.K. retailing."

"Asda has been a powerhouse of innovation for the rest of the Walmart world, and we look forward to continuing to learn from them in the future," said McKenna, who earlier in her career served as Asda's chief financial officer and chief operating officer.

Walmart said in 2018 that Sainsbury's would buy Asda in a deal worth about $9.4 billion based on currency exchange rates at the time. But in April 2019, Britain's Competition and Markets Authority ruled that the sale would reduce competition, resulting in higher prices and reduced product assortment for customers.

Rumors abounded since then that Walmart was courting other prospective buyers and considering an initial public stock offering for Asda.

Walmart acquired Asda in 1999 for what was about $10 billion at the time. The deal was its largest transaction until May 2018 when it bought a majority stake in Indian e-commerce platform Flipkart Group for $16 billion.

"Asda has been losing market share for multiple years now, and I think the growth potential there longer-term was not worth the investment that needed to be made," Yarbrough said. Walmart has said it wants to focus on growing its markets in the U.S., Canada, Mexico and China, he added.

Yarbrough said Walmart's earnings will take a hit in the first year after the sale because Asda was contributing positive earnings. But he said investors likely will look past that if Walmart invests in something with longer-term potential.

The only negative Yarbrough sees would be if Walmart invests in another online company or anything in e-commerce. "That's probably going to be losing money, and so that could even make it worse," he said.

"I think most investors would rather see them take that capital and invest it where they see a better long-term growth opportunity," Yarbrough said.

Asda, with 631 stores throughout the U.K., has consistently been in third place in market share, according to research firm Kantar Worldpanel. Asda had 14.3% of the market in September, behind Sainsbury's 14.9% and market leader Tesco PLC with 26.6%.

All the U.K.'s top supermarket chains have lost market share over the past year as shoppers have increasingly turned to discounters such as Lidl and Aldi, according to Kantar.