REVIEW: ‘The Journey’: Momentary travels to Scotland for magical adventure 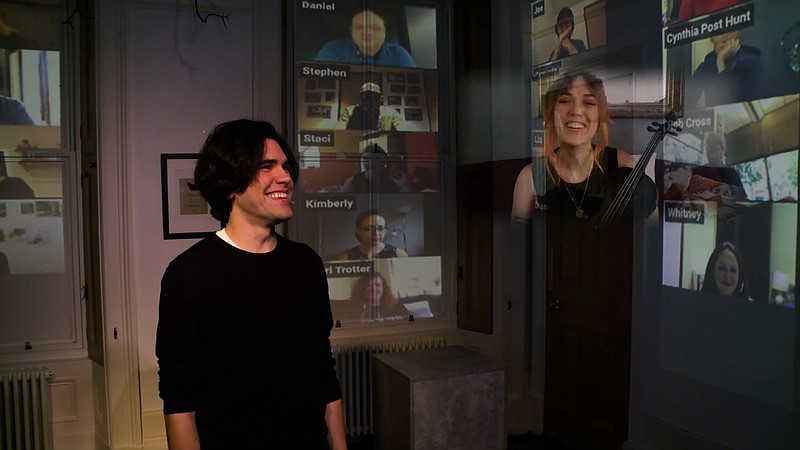 This photo from one of the first live performances of Scott Silven’s “The Journey” gives an idea of how the mentalist and illusionist uses technology to his advantage in the new show, which debuted in collabortation with the Momentary this week. (Courtesy Photo/Journey Productions Limited)

To be in Scott Silven’s presence — even virtually — is pleasantly bewitching. The Scottish mentalist and illusionist is wonderfully skilled at putting his audience at ease and making one feel like he’s speaking directly to you.

In some instances during his performance last night (Oct. 1) of “The Journey,” he was in fact speaking directly to individuals among his audience of two dozen or so. But even still, as a viewer, you feel like you’re part of the experience and connected to what’s obviously a very well-rehearsed, structured performance, if you let yourself.

In partnership and collaboration with the Momentary in Bentonville, Silven presented the world premiere of his new show “The Journey” on Sept. 29. The production utilizes brand new technology for a virtual performative experience that connects audiences in real time with Silven in his home in Scotland.

“What I strive for in all my work is that it is just as much a theatrical and emotional experience as it is an experience of amazing magic and mentalism,” Silven told What’s Up! in a preview interview ahead of the show’s debut.

So how to build those emotional connections between his audience members? This was Silven’s North star while developing the performance in the midst of a pandemic.

A survey sent to me after my attendance at last night’s show asked to what degree I agree with the statement “‘The Journey’ made me feel less isolated.” I live with a significant other; I’ve attended Zoom meetings and conferences and art conversations; I’ve even seen friends here and there as safely as possible over the last few months. But until this question was spelled out in front of me, I didn’t realize how isolated I had been feeling, after all. And that I “strongly agree” — “The Journey” did make me feel less isolated.

When you purchase a ticket to take this journey with Silven, the experience begins before you log into the “performance room.” You are introduced to Silven and an inkling of what to expect from the evening through advance content that arrives by email. Sweeping video of Silven traversing the vast and mystical landscapes of his homeland encourages a curious and open state of mind. Silven asks this of you, too, in pre-recorded audio that must be listened to on headphones for full effect. You’re prompted to drift into your own imagination, explore your memories and bring them to the experience.

This becomes the cornerstone of the performance itself. Viewers each bring something personal to the show, but are also prompted throughout to imagine, remember or choose moments from their past to fill the encounter with intimate and unique details. This same experience — with these same people, memories and objects — will never again take place.

Of course, the big question is how do mentalism and illusion translate when there’s a screen between viewer and performer? I mean, Silven doesn’t stand there performing card tricks, or make an elephant disappear. And though you know there’s some trick to it, it was still genuine delight that rippled through us viewers as each piece played out exactly the way it was supposed to.

In service of promoting a feeling of unity among the viewers and between ourselves and Silven, each of us was actually projected into the room during various parts of the show. From our screen, we can see three of the walls in the room in which Silven is standing. Those three walls transform to the Highland landscapes, crashing waves, dreamy swirling clouds, and back to Silven’s home, where we join him as our projected images appear on the walls surrounding him.

When Silven would interact directly with an individual viewer, that person’s screen seems to magically float in the middle of the room, just next to Silven, where he then directs his gaze, as if looking straight at this person. Also, wonderfully, there’s no tinny quality to the audio, despite it being a virtually streamed performance. This isn’t a Zoom call. If you’re listening through headphones, as recommended, Silven sounds as if he’s standing right next to you. The rest of us did sound a bit digital, but there are just some pieces of worldwide connection that you can’t overcome. It wasn’t too distracting, though.

The pure magic of the tricks is a result of our choices in interacting with each other. It was our individual or collective choices and contributions that determined the paths each illusion would take. There was no way he could have planned ahead of time for the specific details that emerged during the show. HOW, then, did he do it?!

Just as when I attended Silven’s 2018 visit to Bentonville with his dinner theater show “At the Illusionist’s Table,” I suspect I will remain enchanted by this evening of building connections — through my computer screen — with strangers and a charming Scotsman for a long time to come.

WHERE — Purchase tickets at themomentary.org; participants will be sent the performance link

FYI — Performances are limited to a maximum of 30 participants.