Arkansas' number of coronavirus cases grew Wednesday by 942, the largest one-day increase in almost a week.

The state's death toll from the virus, as tracked by the state Department of Health, grew by 19, to 1,369.

In a statement on the day's virus numbers, Gov. Asa Hutchinson pointed to an improvement in the percentage of tests for the virus that were positive.

"We have administered over 1 million covid-19 tests since March, and we have the infrastructure and supplies to increase our capacity as needed."

Meanwhile, the principal of the 2,400-student Central High School in Little Rock said the school will shift to online-only instruction today and Friday after four student-athletes tested positive for the virus, prompting 85 other students and four staff members to go into quarantine.

That announcement came hours after teachers in the Little Rock district who refused to show up for in-person instruction Monday were told that they would be docked pay for that day and suspended without pay for up to five more days.

"Your action diminished the efforts and caused multiple stakeholders to adjust their working day and therefore resulting in unwarranted costs to the district," Superintendent Mike Poore said in a letter to the teachers that was posted on social media Wednesday evening.

State Epidemiologist Jennifer Dillaha said 6% of the polymerase chain reaction, or PCR tests, that were performed on Arkansans were positive for the virus during the week that ended Monday.

With the number of tests performed each week holding fairly steady, "that could be an early sign that we'll begin to see a decrease in active cases" as the number of recoveries begins to outpace new infections, she said.

But she said the virus continues to spread in occupational settings, as well as at events such as family reunions, birthday parties and church revivals "where people from various households are gathering and potentially not taking the precautions of social distancing and wearing their cloth face coverings."

"We're seeing it at, I guess you would say, at kind of a chronic level," she said.

The cases added to the state's total included 607 that were confirmed through PCR tests.

The other 335 were "probable" cases, which include those identified through less-sensitive antigen tests.

All 19 of the deaths that were added to the state's count were of confirmed cases, raising the number of deaths among such cases to 1,223.

Although 52 people with covid-19 were newly admitted to hospitals in the state, the number hospitalized remained unchanged at 490 as others were discharged or died.

The number of people who have ever been hospitalized in the state with covid-19 rose to 5,406.

The state's cumulative count of cases since the start of the pandemic in March rose to 83,697.

The number of confirmed or probable cases that were considered active rose by 49, to 7,009.

That reflected the new cases, 872 Arkansans who were newly classified as having recovered, the 19 covid-19 deaths and the deaths of two people with active infections who died from causes unrelated to covid-19.

Central High School Principal Nancy Rousseau said in a message to parents that the school learned of the four positive tests results Wednesday evening and that contact-tracing efforts had just started.

"LRSD will utilize the remainder of this week to work with the Arkansas Department of Health (ADH) and LRSD's [Point of Contact] team to continue efforts on contact tracing, and to deep clean and sanitize the school," Rousseau said in the message.

"Decisions regarding school for the week of October 5th-9th, will be made later this week."

Parkview and Southwest high schools and Gibbs Elementary in Little Rock had already shifted to all virtual instruction through the end of this week in response to virus cases.

On Monday night, citing the blowback that teachers had received, the union held another vote and decided to go back to teaching in person.

Union President Teresa Knapp Gordon has said 69 teachers who sent notices to the district saying they would not conduct face-to-face classes Monday were notified that they would face disciplinary action.

Poore's letter told the employees that they would be suspended for the first few days of October, starting today, during which time they are not to report to their schools or to any other district property, nor do any district work whatsoever.

The employees have the right to appeal the suspension by asking within five days for a hearing before Arkansas Education Secretary Johnny Key or his designees.

Key acts in place of an elected school board in the state-controlled Little Rock system. He typically has the district's state-appointed Community Advisory Board hold personnel hearings. The advisory board then sends its recommendations to Key for a final decision.

The letter to the employees cites the reason for the suspension as being the teachers' failure to follow absence-reporting procedures.

"You purposefully and intentionally refused to report to work in person as is required, to your assigned workplace."

The letter posted on social media also states that the recipient surreptitiously participated in a plan to deliberately disrupt the learning environment.

The posted letter also notes that the employee previously was docked a day of pay in November 2019 for participating in a work stoppage.

Gordon didn't respond to a request for comment on the suspensions Wednesday.

On its Facebook page, the union asked for donations to a GoFundMe page created in October "to provide support for members in the case of a collective job action."

"Today, the #LR69 Members that stood up against unsafe schools received 3 and 5 day suspensions in addition to a 1 day pay dock," the union said on its Facebook page. "That equals $900-$2000 per teacher. Help us make them whole and offset these losses."

In its daily covid-19 update, reporting on activity in the 24-hour period ending at 3 p.m. Wednesday, the Little Rock district reported that one employee at Mann Middle School had tested positive and four others were required to quarantine.

Two students at Otter Creek Elementary School and one student each at Central High School and the Chicot Early Childhood Center were also required to quarantine, as was a district child nutrition staff member, the district reported.

In Rogers, a teacher's positive coronavirus test result prompted a third-grade classroom to shift to virtual instruction Wednesday after 18 students were required to quarantine, according to the state's Division of Elementary and Secondary Education, which tracks school modifications.

The class at Northside Elementary School was scheduled to return to in-person instruction Oct. 9.

The state's count of confirmed and probable cases rose by 96 in Washington County, 87 in Pulaski County, 64 in Benton County, 61 in Craighead County, 35 in Faulkner County, 33 in Sebastian County, and 32 in both Independence and White counties.

Among prison and jail inmates, the state's count of cases rose by two. Such increases can reflect new cases or ones that were added earlier but not immediately classified as coming from a jail or prison.

From Friday to Tuesday, the number of inmates listed in Health Department reports as having tested positive rose by 99, to 157 at the state's Maximum Security Unit in Jefferson County; by 68, to 245, at the Pine Bluff Unit; and by 41, to 596, at the Varner Unit in Lincoln County.

Pulaski County continued to have the highest number of cases that were active. It had 673 such cases as of Wednesday.

Jefferson County had the next-highest active case total, 550, followed by Washington County with 476 and Craighead County with 420.

The state's count of virus deaths increased by two each in Jefferson, Pope, Union and White counties.

Health Department spokesman Gavin Lesnick said 12 of the deaths happened within the past week. Five occurred earlier in September and the other two were from August, he said.

Among nursing home residents, the state's count of virus deaths rose by seven, to 462.

Wednesday's increase in confirmed and probable cases was the largest since Sept. 24, when 1,086 cases were added.

But over a rolling seven-day period, the average number of cases added to the state's total each day fell by 6, to 819.

At The Waters of Mountain View, the number of cases among residents, as tracked in Health Department reports, jumped from 19 as of Friday to 75 as of Tuesday.

Among staff members, the number of cases grew from nine to 55.

Three residents had died of the virus as of Friday, according to a Health Department report.

The 97-bed home is one of 13 long-term-care facilities that were sold in 2018 by the failing Skyline Health Care nursing home chain to Hillside, Ill.-based Infinity Healthcare Management.

Those include Hot Springs Nursing and Rehabilitation, which, according to the Health Department, has had 68 cases and 20 deaths from the virus, and The Waters of White Hall, where the department lists 16 residents as having died of the virus and 46 as having tested positive.

"I can tell you from a general point of view, the nursing home world has been playing defense since before March -- no visitors allowed and a crazy amount of defense that they're playing," Moishe Gubin, one of Infinity's owners, said Wednesday.

Although, they aren't named in the report, Lesnick identified them as a Tyson Foods plant in Pine Bluff, Lennox Industries in Stuttgart and the Pine Bluff Fire and Emergency Services Department.

The Tyson plant was listed as having a total of 59 cases. Lennox Industries had 37, and the fire and emergency services department had nine.

Six of the cases at each workplace were listed as being active as of Monday.

The University of Central Arkansas in Conway reported 24 new cases in its weekly covid update, which is published on Wednesdays, bringing the cumulative number of cases at UCA to 182 since March 13.

The University of Arkansas, Fayetteville, identified 17 new positive cases since it last updated its data Monday. UA-Fayetteville, which has more than 27,000 students, leads the state with the highest number of cases, according to data from the Arkansas Department of Health.

UA-Fayetteville reported 68 active cases Wednesday, up from 63 active cases the university reported on its website Monday. Cases are removed from UA's active count after 10 days have passed since testing dates.

As of Wednesday afternoon, Arkansas State University in Jonesboro logged 44 active cases, about half the number of cases it reported on the same day the week before. ASU's cumulative cases since the beginning of June now tally 538, according to the university's website.

Also as of Wednesday afternoon, the University of Arkansas at Little Rock, reported 12 active student cases on campus, bringing the cumulative number of cases on campus since March to 78.

Southern Arkansas University in Magnolia recorded 12 active cases on campus Wednesday, bringing SAU's cumulative number of cases to 109 since the beginning of July. 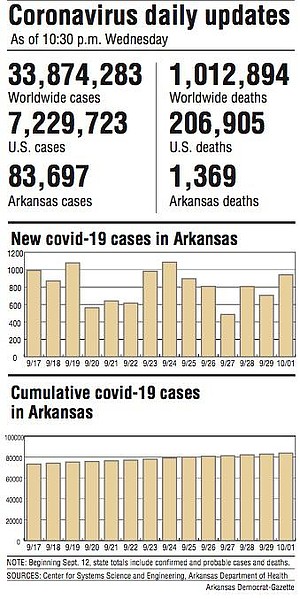