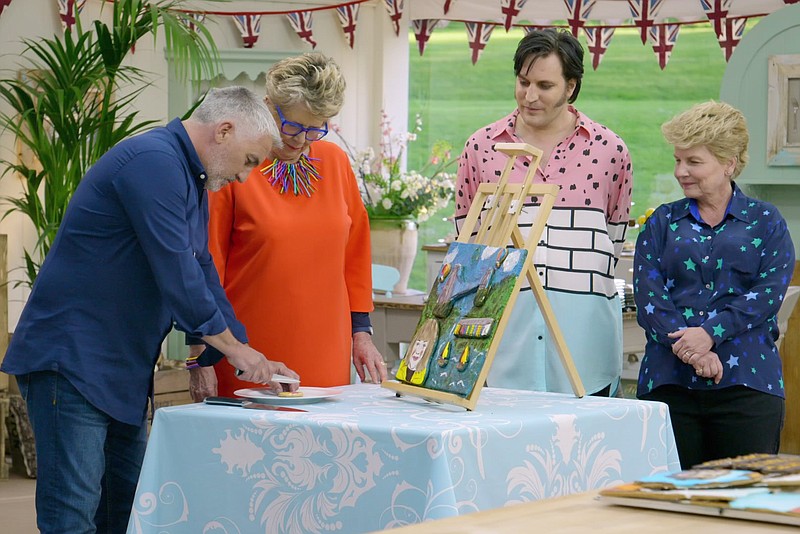 The West Coast is on fire. Schools are closed and millions remain out of work thanks to an unchecked pandemic. We've lost real-life heroes who fought for change in Hollywood and Washington. And the things we normally do to escape — movies, concerts, long dinners with friends in establishments with four walls and a roof — are unavailable to us.

If the record-setting triumph of "Schitt's Creek" at this year's Emmys proves anything, it's that viewers right now are desperate for a bit of TV comfort food. "GBBO" has always offered a pastel-hued respite from the typically cynical world of reality TV, an unscripted sanctuary where no one is ever thrown under a bus and seemingly everyone in the ensemble has, in fact, come to make friends. But the show's charms have perhaps never been more evident than now, at the tail end of a year that has already lasted three decades.

The show's return is something of a miracle. Originally scheduled to go into production in April, this season finally began filming in July. Perhaps aware the world was desperate for a serving of good news — and some new TV to watch — producers scrambled to get the episodes to air less than a month after wrapping

"GBBO" makes its return at a moment when interest in baking has surged. In the early months of quarantine, so many people were passing the time by baking — especially bread — that there was a nationwide shortage of yeast (leading, in turn, to a craze for sourdough). Many of us have imagined Paul Hollywood pointing to our sad homemade ciabatta loaves and saying in his Liverpool accent: "It's undah-proooooved."

Fittingly, the season premiere opened with a brief, gentle acknowledgment of the challenging times we're living in. In voice-over, new host Matt Lucas explains that the bakers have volunteered to leave their loved ones and live in "a bake-off bubble." We hear from contestants about the difficulties of leaving their families for seven weeks and see a National health Service-theme cake decorated with masked health care workers.

"Once we all walk into the tent, I think it will get back to something very familiar," says Hollywood. And he's right: If you watched the rest of the hourlong episode, you would have little idea it was filmed in the middle of a pandemic.

No one is wearing a mask or face shield. People stand inches apart, with no plastic glass partitions to be seen, grazing one another's shoulders and elbows with wanton abandon. They even ... hug. And if production assistants are frantically wiping down every piece of equipment in the tent — as they probably are — their efforts do not appear on camera. And, to be honest, the sense of normalcy is a profound relief. The real world is a waking nightmare, but in the tent, it's cake week.

In case you were wondering how producers pulled it off: The show returned to production in July under strict precautions. Everyone involved isolated for nine days and got three tests before filming began. Unlike in the Before Times, when contestants would go home during the week and return to the tent to bake each weekend, they stayed on-site — mostly isolated from family and friends — for the duration of the contest.

More than 100 contestants, producers, crew members and hotel staff holed up at a hotel for the entire seven-week production. Producers even set up individual test kitchens where the bakers could practice. Some customs, like the Hollywood handshake, are reportedly gone — and honestly, I will not miss this unhygienic gimmick one bit.

The bakers this season are a reassuringly familiar mix of established "Bake Off" types.

There's the Wunderkind (Peter, from Edinburgh, who specializes in gluten-free treats). There's the Endearingly Eccentric Older Guy Who Likes Classical Music (Rowan, whose signature bake is inspired by "The Magic Flute"). And there's the Acerbic Young Woman With Bold Eye Makeup (Lottie, who, we are told in one of the most amazing sentences uttered in the English language, "unwinds from her job as a pantomime producer by listening to Viking metal whilst baking and doing yoga.")

The signature challenge is a Battenberg, a two-toned sponge cake wrapped in marzipan that, frankly, seems like way more work than it's worth. The editing, as always, is a bit of a giveaway.

The technical challenge is a pineapple upside-down cake, which proves vexing for a number of the contestants.

The episode culminates in an endearingly bonkers showstopper challenge that, in its utterly harmless way, captures the mind-bending weirdness of the last few months without piercing the joyful "GBBO" bubble.