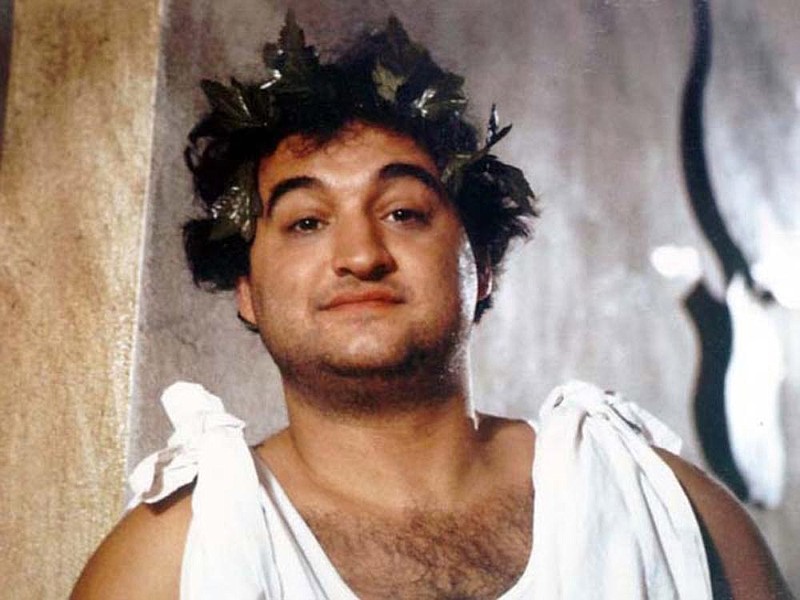 The brief and brilliant career of John Belushi, shown here in “Animal House” as the betogaed Bluto Blutarsky — the role that raised him from the star of a cult favorite latenight TV show to a national phenomenon in 1978 — is the subject of a new documentary.

When many of us were kids, the day after Thanksgiving wasn't known as Black Friday, and it wasn't much of a shopping day until the late 1980s.

But apparently, the term to describe the day after Thanksgiving was in use in Philadelphia as early as 1961, and the idea of the date marking the informal beginning of the Christmas shopping season goes all the way back to 1952.

Now Black Friday is a global event, though Thanksgiving remains an American holiday. (Canada has a Thanksgiving too, celebrated on the second Monday of October and marked by a Canadian Football League double-header, though our friends to the north generally have their big feasts the day before the holiday.)

In normal years, Thanksgiving and Black Friday are big movie-going days. Last year there was a survey -- one to be taken with a tub of popcorn, considering it was commissioned by National Cinemedia, which creates and places ads in movie theaters -- that said 82% of respondents would rather go to the movies than go shopping on Black Friday. (I'd have more faith in that number if the study didn't also find that 76% of people would rather go to the movies than watch football on Thanksgiving. Much of their polling was likely conducted in movie theaters.)

Still, moviegoing is a viable alternative form of Black Friday recreation. While apparently no cases of covid-19 have been traced to movie theaters, it's sensible to be careful out there. And so far the options have been limited -- there haven't been a lot of reasons for casual moviegoers to want to go back to theaters. Some good films have been released, but not even "Tenet" popped at the box office this year. (It's so bad that most weeks we don't get weekly box office reports from the wire services.)

David Fincher's "Mank" showing up on local screens in advance of its Netflix debut on Dec. 4 is a welcome surprise. Netflix was expected to treat "Mank" -- a biographical drama on the life of Herman J. Mankiewicz as he wrote "Citizen Kane" -- the same way it had Alfonso Cuarón's "Roma" and other prestige titles in that it would show the film on a few screens in New York and Los Angeles before streaming it.

For it to show up in an Arkansas theater is encouraging -- no matter how nice a home rig you have, films like this are always better when consumed as part of a civic ritual, on the biggest screen possible, in the company of strangers.

Even though not all the reviews have been stellar -- the Ann Hornaday review we're featuring today is mixed -- "Mank" promises to be one of the signal movies of 2020. It's the sort of event that might cause some moviegoers to finally put on a mask and resume their habit.

That said, the movie wrong-footed us in same way "Hillbilly Elegy" did a couple of weeks ago. I'd commissioned a review of that film to run on the day it started streaming. But when it unexpectedly popped up in theaters a couple of weeks early, we decided to run a wire review. Now I'm thinking of running our own review, for a couple of reasons. The first is practical -- the work is done. And it's a good review (though its evaluation of the movie is pretty much the same as the review we hastily slapped in). So maybe we'll call it a second take, and put it out there. Or maybe we won't, since we don't exactly lack for potential material.

One of the reasons we like running our own reviews is because a lot of the stuff that moves across the wire services these days doesn't meet our standards. Not that the reviews are badly written, but they're more book reports and consumer tips than actual criticism.

That doesn't apply to the "Mank" review we're running this week -- I'll take all the Ann Hornaday copy I can get. She's one of the best critics writing today. And her approach fits with the way we look at the movies.

This might seem a little inside-baseball to some of you ("'Mank,'" Hornaday writes, "isn't inside-baseball as much as the foam core under the last layer of the inside of the baseball") but our focus groups, which are as stacked as National Cinemedia's polls, tell us that's the sort of content you guys want.

Aside from "Mank," "The Croods: A New Age" is new in theaters. It has its partisans. And anything that helps Nicolas Cage and Emma Stone thrive is arguably good for our society.

On Saturday, the new HBO film based on Ta-Nehisi Coates' 2015 book "Between the World and Me" makes its debut. It's said to be remarkable, and though those who have read the book might expect to be excused, this will be another one of the few important moments of national communion we've experienced through our scenes this year, like "Hamilton," "David Byrne's American Utopia" and "The Good Lord Bird."

The HBO film was directed by Coates' friend and fellow Howard University grad Kamilah Forbes, who staged a theatrical version of the book at the famed Apollo Theater in 2018.

And "Dreamland," the Margot Robbie vehicle that had its premiere at the Arkansas Cinema Society's Filmland event earlier this is year, is now available for rental on various streaming platforms. It tells the story of a Texas teenager (Finn Cole) who takes up a life a crime in an effort to save the family farm from foreclosure.