Georgia has QB in USC transfer 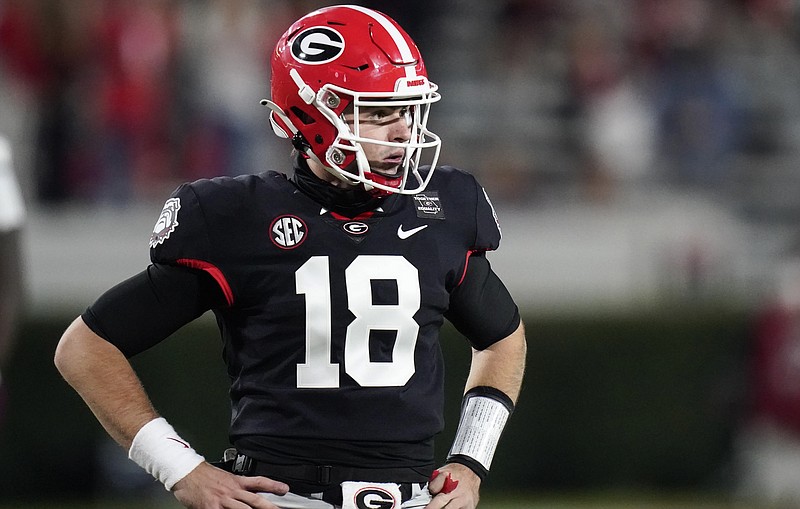 Georgia quarterback JT Daniels looks for a play call from the sideline during the first half of the team's NCAA college football game against Mississippi State, Saturday, Nov. 21, 2020, in Athens, Ga. (AP Photo/Brynn Anderson)

ATHENS, Ga. -- Georgia finally has its quarterback, though it's probably too late to salvage the Bulldogs' lofty goals for this season.

JT Daniels, the transfer from Southern Cal, took his first snaps in the red and black last weekend, throwing for 401 yards and four touchdowns in a 31-24 victory over Mississippi State.

It was a tantalizing display by the strong-armed Daniels, who completed six passes that covered at least 28 yards -- three of them going for more than 40 yards.

Daniels figures to be at the helm for the final three games of the regular season, giving him a head start on holding down the job from the very first practice of 2021.

That' would be a far cry from this season, when four quarterbacks got a crack at the starter's role for the No. 13 Bulldogs (5-2), who play at South Carolina (2-6) on Saturday.

"What you're looking for is above-the-line play, high-level play, and that's what we've been searching for all year.," Coach Kirby Smart said Monday. "Any time you get continuity at that position, is it a benefit? Absolutely, it's a benefit."

Smart will surely face lingering questions about why he didn't make the move to Daniels sooner.

By the time Daniels got the nod, Georgia had lost to both Alabama and Florida to end any realistic hope of getting back to the SEC Championship Game for the third year in a row and contending for a national title.

"Maybe the question should be, 'Man, aren't they glad they got JT here when nobody thought they needed him?'" Smart shot back. "Would I have loved it if he had done the same thing against those other teams? Absolutely. But decisions are made based on who gives us the best opportunity to win."

In all fairness, Daniels wasn't cleared to play in the opener as he continued his recovery from a serious knee injury sustained in the 2019 season opener, which turned out to be his last game at Southern Cal.

Even after he got the OK from the training staff, Smart said there were still doubts about his mobility and grasp of the playbook.

Daniels, who was one of the nation's most touted quarterbacks coming out of high school, didn't second-guess Smart's decision to keep him on the bench the first six games. He was just glad to get back on the field for the first time in nearly 15 months.

"It's been a long time since I've taken a game snap," he said. "I was just thankful to do it again."

After the injury, when it became apparent the Trojans would go in a different direction at quarterback, Daniels transferred to Georgia -- even though the Bulldogs already had landed another transfer, former Wake Forest starter Jamie Newman, who was favored to take over for Jake Fromm.

Stunningly, just a few weeks before the opener, Newman opted out of the season. Redshirt freshman D'Wan Mathis got the start against the University of Arkansas but was largely ineffective, forcing the Bulldogs to turn to one-time walk-on Stetson Bennett, who served as Fromm's backup last season.

After Bennett rallied Georgia to a win over the Razorbacks, he took over as the No. 1 quarterback while Daniels remained relegated to the scout team. Bennett played well until the second half of a 41-24 loss to No. 1 Alabama.

Georgia managed to beat Kentucky with a lackluster performance, but Bennett banged up his shoulder in the next game against sixth-ranked Florida and wound up getting replaced by Mathis, who finished up a 44-28 setback to the Gators.

That left Smart with the obvious decision to give Daniels a shot.

Going deep over and over against a Mississippi State defense that stacked the line to stop the run, Daniels provided Georgia with the sort of wide-open attack it had been lacking all season, despite an immensely talented group of receivers.

Freshman Jermaine Burton hauled in 8 passes for 197 yards and 2 TDs. George Pickens had 8 receptions for 87 yards and 1 TD. Kearis Jackson pulled down the winning score on a 40-yard touchdown play with just under 10 minutes remaining.

"It's super exciting to see those big, explosive plays," tight end John FitzPatrick said. "We hit our deep shots, which should open up more stuff in the run game and play-action . It's exciting all the way around."

If only it had happened a bit sooner for the Bulldogs. 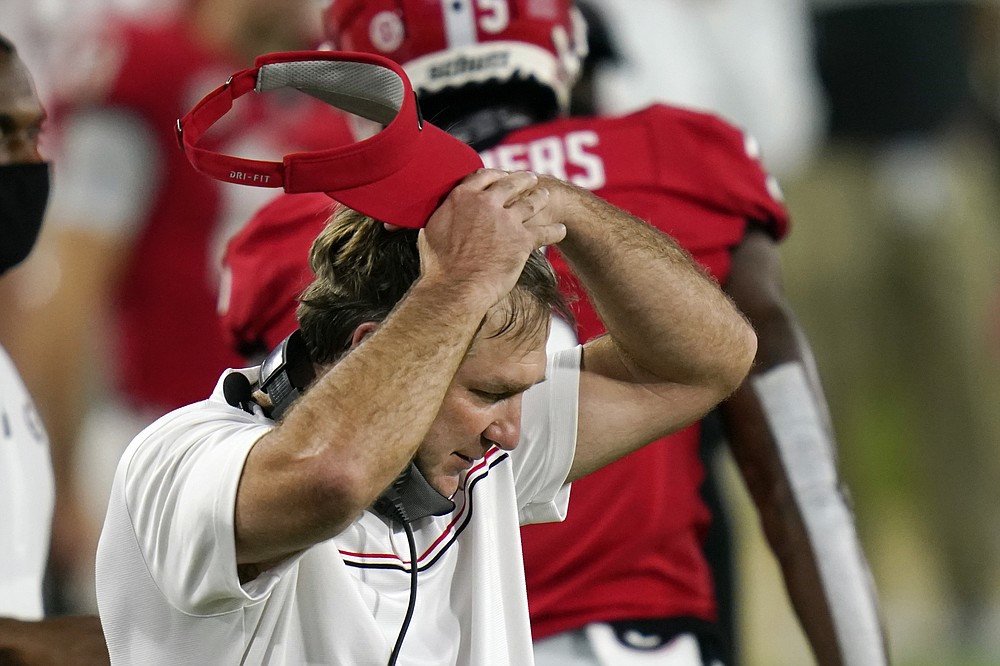 FILE - In this Saturday, Nov. 7, 2020, file photo, Georgia head coach Kirby Smart pauses during timeout against Florida during the second half of an NCAA college football game in Jacksonville, Fla. Georgia plays at Sanford Stadium for the first time in six weeks when it hosts Mississippi State Saturday night. Since its last home game, a 44-21 victory over Tennessee on Oct. 10, Georgia has taken double-digit losses to SEC powerhouses Alabama and Florida. (AP Photo/John Raoux, File) 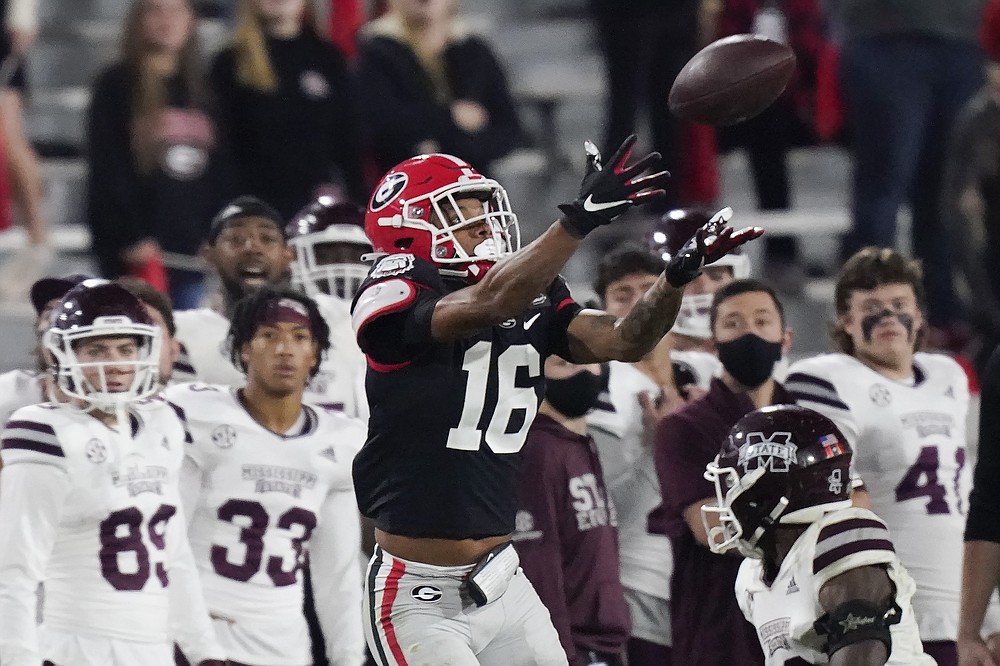 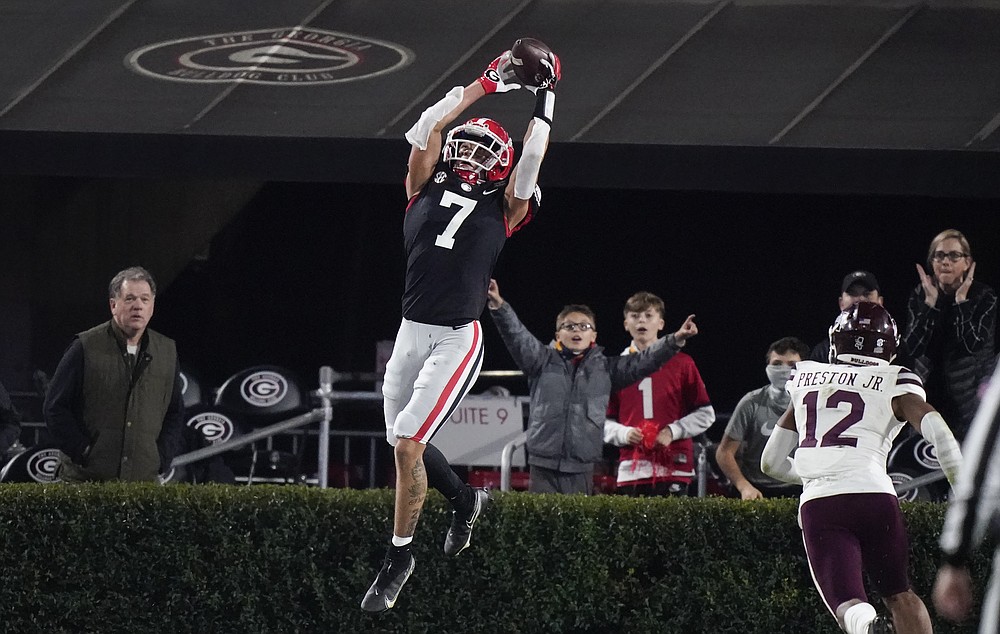