Tougher civilian oversight wins in a number of communities by ANDREW WELSH-HUGGINS THE ASSOCIATED PRESS | November 22, 2020 at 5:03 a.m. 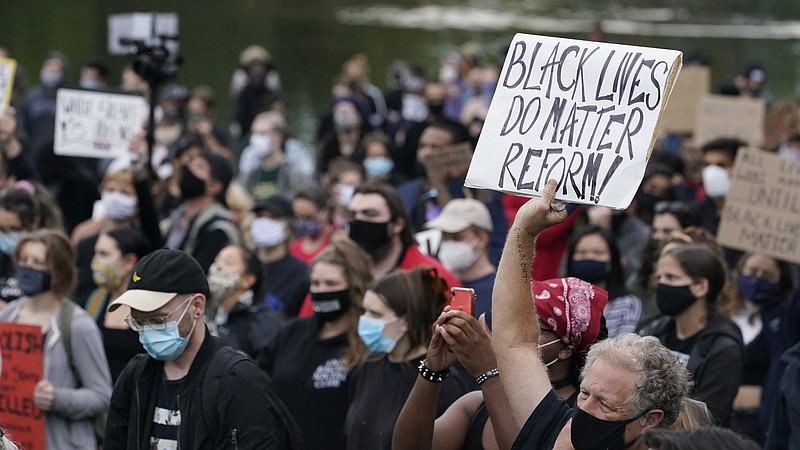 FILE - In this Sept. 29, 2020, file photo, a man holds a sign during a protest, in Cleveland. Voters in communities across the country, including Columbus, Pittsburgh, Portland, San Jose and Seattle, approved measures on Election Day toughening civilian oversight of law enforcement agencies, including some that took years to reach the ballot but grew in urgency after global protests over racial injustice and police brutality. (AP Photo/Tony Dejak, File)

COLUMBUS, Ohio -- Voters across the country approved measures on Election Day toughening civilian oversight of law enforcement agencies, including some that took years to reach the ballot but grew in urgency after global protests over racial injustice and police brutality.

The measures take aim at a chronic sore point in many communities, particularly among Black residents: that police departments traditionally have little oversight outside of their own internal review systems, which often clear officers of wrongdoing in fatal civilian shootings.

"Recent events opened up people's eyes more to how much this type of oversight is needed," said Monica Steppe, a San Diego councilwoman who championed a successful proposal predating the protests that will dissolve the city's current police review board and replace it with a more independent body with investigative powers.

However, the oversight boards don't address other points of contention, such as the lack of diversity in many departments, and the perception of a different standard of policing for Black residents than white.

In San Jose, Calif., voters approved an expansion of an independent police auditor's powers, including the ability to undertake investigations even without a complaint.

The proposal was in the works for three years, but the City Council voted to place it on the ballot in the wake of the protests that flared up nationally after George Floyd died at the hands of Minneapolis police in May.

"It ended up being great timing for us, because as the national spotlight shined on police excessive use of force and police brutality and certainly demands for oversight, we already had everything in the works," said Council Member Raul Peralez, a former San Jose police officer and now a reserve officer.

And in Los Angeles, voters approved a measure requiring that at least 10% of county general fund revenue be set aside for alternatives to incarceration. But statewide, voters rejected a measure to replace cash bail with a system based on public safety and flight risk.

Critics of cash bail say it discriminates against poor people, including the disproportionate number of minority-group members in the criminal-justice system. New Jersey in 2017 essentially eliminated cash bail.

In Portland, Ore., voters approved a City Council-backed measure that gained momentum after the spring protests to create an independent commission overseeing misconduct investigations of police officers. The measure already faces a police union grievance trying to stop it.

In Seattle, voters gave the King County Council the ability to specify the sheriff's public safety powers. The goal was providing an alternative to some policing practices, such as expanding the use of social workers to respond to emergency calls of people in crisis. The referendum grew directly out of the reckoning that followed Floyd's death, said Council Member Girmay Zahilay.

A successful Philadelphia ballot issue creates a new civilian review commission and places it under the control of the City Council in the hopes of making it more independent. In Pittsburgh, a charter amendment requiring police officers to cooperate with the city's civilian police review board passed overwhelmingly.

The law enforcement community remains concerned that such oversight boards -- which often don't involve police input -- are punitive and automatically assume wrongdoing by officers based on their prejudices, said Jim Pasco, executive director of the National Fraternal Order of Police.

"Because they come from a flawed premise, in many instances they're going to lead to flawed conclusions, and therefore the remedies they would propose are going to be equally flawed," he said.

​​​​​Information for this article was contributed by Gillian Flaccus of The Associated Press.