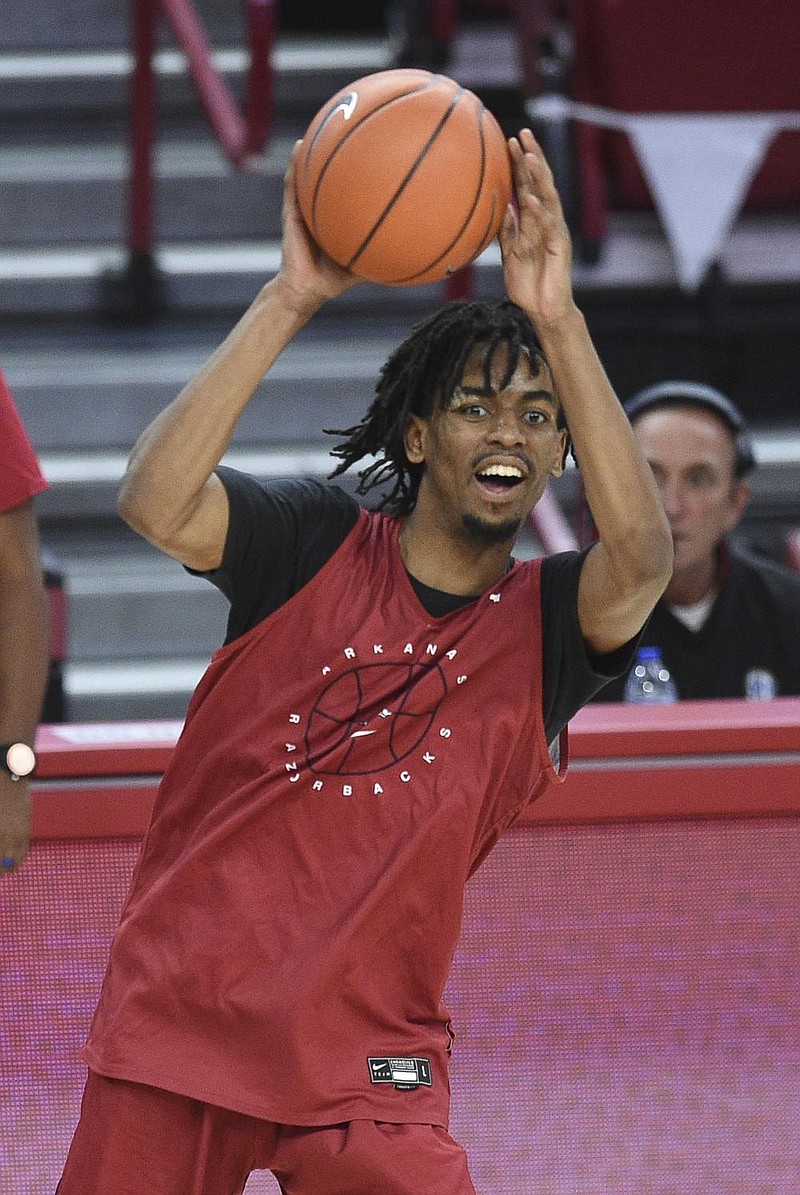 But the three are newcomers for the University of Arkansas.

Jackson, Smith and Tate are senior graduate transfers who signed last spring and are immediately eligible this season. They are the Razorbacks' only scholarship seniors.

For those who think of one-and-done college players strictly as star freshmen at Kentucky or Duke who leave as first-round NBA Draft picks, increasingly now seniors are one-and-done, too.

The NCAA transfer portal, which allows players who have graduated to have immediate eligibility at a new school, has dramatically changed recruiting and the college basketball landscape.

Now coaches needing an influx of talent and experience pursue graduate transfers -- the vast majority of whom are seniors -- and few if any do it better than Arkansas Coach Eric Musselman and his staff.

Whenever it was reported last spring that a graduate transfer was going into the portal and schools that were on the player's radar were mentioned, the list inevitably included Arkansas.

Jackson, Smith and Tate had plenty of good transfer choices along with Arkansas

Among the other schools that contacted Jackson – who averaged 11.1 points, 5.3 rebounds and 1.3 assists last season – were Louisville, Cincinnati, Memphis, Ole Miss and Arizona State.

When Jackson transferred to New Mexico after his freshman season at Connecticut, he first turned down an offer from Musselman, who at the time was Nevada's coach.

"I feel like he'd been there from Day One," Jackson said. "He always was the first to contact me whether he was at Nevada or Arkansas."

"I loved their style of play," he said. "I also just feel like being in the position I am and seeing the success of other players that came into his program, it just made sense for me to come to Arkansas."

"Vance stepped up against a ranked team and dominated the game," Musselman said. "When he verbally committed to us, I would say seven to eight of the guys off the Nevada team texted me, because our guys had tremendous respect for him."

"Vance's strength as a player is definitely shooting the ball," Smith said. "Every time he shoots the ball, we think it's going in."

"Vance is experienced," Musselman said. "He can play the three and the four, and if we really want to play small ball, we'll be able to play him at the five.

"We think he has the ability to be a good rebounder based on instincts. He's a player that on any given night is capable of having a big scoring night."

Smith averaged 10.4 points and 5.2 rebounds last season at Indiana. He played in 98 games for the Hoosiers, including 73 starts. Three of Smith's starts came against Arkansas in a home-and-home series and an NIT game in Bloomington, Ind.

Smith said the Razorbacks were a tough team to play, but that those matchups didn't influence his decision to transfer to Arkansas over Maryland, Iowa State and Illinois.

"I just really wanted to come down here and play for Coach Muss," Smith said. "I've seen what he's been able to do with his teams and his players. He's big on player development, and that was something I was looking for."

"When you watched him play last year, he can guard so many different people," Musselman said. "He can guard perimeter guys -- because he can move his feet -- and he's got the strength to guard bigger guys. He also has really good anticipation.

"Offensively, he's an incredible finisher in transition. He's a guy that can get out and run the wing."

Smith averaged a team-high 30.3 minutes at Indiana as a junior.

"You're talking about a player that led a Big Ten program in minutes," Musselman said. "Which kind of tells you the value that Indiana [put on Smith].

"He's a proven player in arguably one of the best conferences in college basketball. And he's a high, high character guy, with a high basketball IQ."

"That kid is really, really talented," Howland said. "We tried to get involved with him. I actually spoke to him on the phone when he went into the portal and didn't really get any traction with him.

"But I'm really impressed with him. He started the majority of the games at Indiana. I was kind of questioning, 'Why are you leaving? It's not like you're not getting playing time and not getting shots.' I didn't really understand it, but I can tell you this, he would start at the vast majority of Division I schools across the country with his skill package."

Smith said he felt he'd done about everything he could at Indiana and needed a change.

"I enjoyed my three years there, and I made a lot of good memories," he said. "But it was time for me to move on."

Smith described himself as an athletic, savvy player who is ready to put his Big Ten experience to good use in the SEC.

"I'm really coachable," he said. "I'm ready to do whatever Coach Muss wants me to do."

Musselman previously was an NBA head coach with Golden State and Sacramento and an assistant with several other teams. His three Arkansas assistant coaches all have NBA experience.

David Patrick was a scout for Houston; Corey Williams played with Chicago when the Bulls won the 1993 championship; and Clay Moser was an assistant coach for the Los Angeles Lakers and scout for Cleveland, Orlando, Sacramento and Golden State. Earl Boykins, the Razorbacks' director of student-athlete development, played 13 seasons in the NBA.

"Everybody who plays basketball growing up wants to play in the NBA," Smith said. "So playing for a staff with so much NBA experience and knows what it takes to get there is definitely a big draw for a lot of guys."

Jackson said Smith's versatility is a huge plus.

"Justin just brings that all-around game that every team needs," Jackson said. "He does everything, and he's explosive."

Tate played in 93 games at Northern Kentucky with 83 starts. He averaged 13.9 points, 5.4 rebounds, 3.6 assists and 1.9 steals last season when he also was the Horizon League defensive player of the year. He made the all-defensive team three consecutive seasons.

"Jalen's got really good length," Musselman said. "He should be one of our premier defenders.

"He's a very unselfish player. He looks for his teammates first. His own shot is the last option for him. Our offense flows really good when he's got the ball, because he's naturally and instinctively unselfish."

Tate said that when he decided to transfer, his top choices along with Arkansas were Cincinnati, Iowa State and North Carolina State.

Cincinnati Coach John Brannen recruited Tate to Northern Kentucky and coached him there for two seasons, but Tate decided Arkansas was his best option.

"I wasn't necessarily looking at the SEC," Tate said. "But I definitely wanted to take a little step up from a midmajor, and I knew they had the culture here I was looking for."

Tate said that when he watched Nevada's run to the NCAA Tournament Sweet Sixteen, which included an overtime victory over Cincinnati, he was impressed by how the Wolf Pack played while led by three transfers -- twins Caleb and Cody Martin, and Jordan Caroline. The Martins now play in the NBA with Charlotte.

Jimmy Whitt averaged 14.9 points, 5.1 rebounds and 2.2 assists as a senior graduate transfer for Arkansas last season after he transferred from SMU.

"Coach Muss harped on how he has had really good success with transfers in the past," Tate said. "That for sure influenced my decision, as well as the facilities obviously."

Tate wasn't able to play against Arkansas last season because of a hand injury, but he was on Northern Kentucky's bench when the Razorbacks beat the Norse 66-60 in Walton Arena.

"It was a great atmosphere," Tate said. "I'm looking forward to that, being on this side of it."

Smith said he's looking forward to playing with Tate and seeing what he can do for the Razorbacks.

"Jalen gets players in the right spots, and he doesn't ever really get sped up," Smith said. "He's playing at his own pace."

Musselman said his knowledge of the three senior graduate transfers -- having played against Jackson and Smith, and scouted Tate -- made it easier to want to bring them to Arkansas.

"When Justin Smith got in the portal -- or Vance Jackson or Jalen Tate -- I did not have to spend hours watching game tape," Musselman said. "Those hours had already been done. I had a vision of how those guys could fit in here."

More than 230 players with immediate eligibility entered the transfer portal after last season, which ended abruptly when conference tournaments, the NCAA Tournament and NIT were canceled because of the coronavirus pandemic.

"I mean, names were coming like every two minutes," Musselman said. "Sometimes there were 20 names in one section of time.

"You just can't watch all of them. But certainly [Jackson, Smith and Tate], we had a really good feel for them as players."

"If you want to talk about 18 months ago, we would have thought that Isaiah and Mason would still be part of our program," Musselman said. "Both of those guys coming off averaging around 13 points per game prior to us coming here. We thought maybe one of them might play his way into the draft conversations, but I don't think any of us could have envisioned we would have both those guys in the draft."

"They have a lot of experience, and that translates into knowledge," Moody said. "So they're an example that I can follow."

Arkansas has 10 newcomers with the senior transfers, freshmen and transfers who redshirted last season.

"It's definitely been interesting with so many newcomers," Smith said. "I don't think any of us have really been in this type of situation before, but we've all bonded pretty well.

"As seniors, we're able to draw from our experiences at other schools. But this is a new chapter for us at Arkansas."