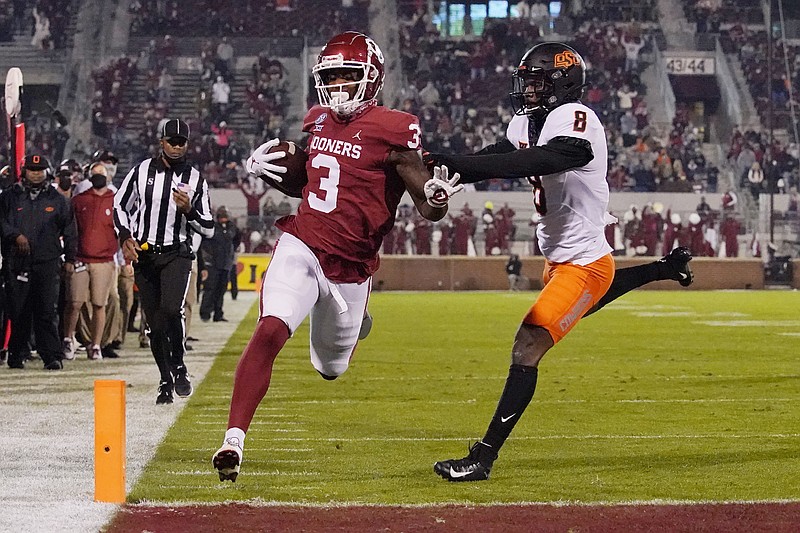 NORMAN, Okla. -- Spencer Rattler wanted to show out at Bedlam.

The freshman came through. He passed for 301 yards and four touchdowns and ran for another score to help No. 18 Oklahoma beat No. 14 Oklahoma State 41-13 on Saturday night.

"I told myself I needed a big game, especially in this one," Rattler said. "I went out there and trusted the process. Guys around me played really well and helped me out. O-line blocked well, receivers caught the ball, defense played well. It's not just me out there. Everybody played well and that contributed to the stat sheet."

Rattler helped the Sooners boost their chances of winning a sixth consecutive Big 12 championship. Iowa State leads the way with just one conference loss, and Oklahoma State joined Oklahoma and Texas with two league losses in the race to qualify for the Big 12 Championship Game.

Oklahoma leads the series 90-18-7, winning the last six games between the two schools.

The Sooners did it in front of a crowd limited to 25% of capacity because of the covid-19 pandemic.

"That place was rocking," Oklahoma Coach Lincoln Riley said. "I don't care how many people were in here. The guys played well and really fed off of it. All of this talk about not having a homefield advantage -- with limited people in the stadium. If you were in that stadium tonight, there was a homefield advantage, which is pretty special."

Oklahoma State gained just 246 total yards. Running back Chuba Hubbard was held to 44 yards on eight carries, with most of it coming on a 29-yard run. Tylan Wallace was limited to 68 yards on four catches.

Oklahoma raced to a 21-0 lead in the first nine minutes on the strength of three touchdowns by Rattler -- two passing and one rushing. The Sooners led 21-7 at the end of the first quarter. It was the most points Oklahoma has scored in a first quarter against Oklahoma State in Norman.

"I wish we could have had the first quarter back," Oklahoma State Coach Mike Gundy said. "We put ourselves in a hole, we never really could come back. We're not as explosive in certain areas as we have been in past years, so it was a bit tougher. ... We lost to a better team."

The Bearcats (8-0, 6-0 American) fell behind 14-3 in the first quarter against their toughest opponent yet, but grabbed the lead by halftime. Rider passed for 338 yards and ran for 57.

Dillon Gabriel threw for 243 yards, 3 touchdowns and 1 interception as the Knights (5-3, 4-3) lost at home for the second time this season.

Allgeier had his fourth 100-yard game of the season. Zach Wilson threw for 212 yards and 4 touchdowns before halftime, and added 33 yards rushing. He had a season-high 256.3 QB rating.

BYU scored touchdowns on all six first-half drives. The Cougars rolled up 394 total yards and averaged 11.3 yards per play before halftime.

Rett Files threw for 198 yards and a touchdown for the Lions (0-4). Files played during the second and fourth quarters while starting quarterback Blake Dever took snaps in the first and third quarters. Dever threw for 107 yards.

Northwestern forced five turnovers -- four in the first half -- and sacked Mertz three times in its first win over a Top 10 team since a 28-25 victory over No. 9 Nebraska on Nov. 5, 2011. Ramsey, a graduate transfer from Indiana, was 23 of 44 for 203 yards, and Ramaud Chiaokhiao-Bowman had 4 receptions for 95 yards.

Wisconsin (2-1) had committed just one turnover this year, a fumble during a 45-7 victory over Illinois on Oct. 23. The Badgers then had back-to-back games canceled because of a covid-19 outbreak within the program before rolling to a 49-11 win at Michigan last weekend.

At 3-0, Oregon solidified its spot atop the Pac-12 North.

Devon Williams had 6 catches for 123 yards, including a 19-yarder for a score and a 49-yard reception that helped set up a third-quarter score.

Griffin threw for 195 yards, 1 touchdown and 2 interceptions. Demetric Felton rushed for 167 yards and two touchdowns, including an 11-yard scoring run that got the Bruins within three with 3:43 left.

CONWAY, S.C. -- Reese White scored on a 3-yard run with 2:24 to play as Coastal Carolina improved to 8-0 with its first victory over Appalachian State.

The Chanticleers (6-0 Sun Belt) had lost all six previous games to the four-time defending Sun Belt champion Mountaineers, but they held Appalachian State (6-2, 4-1) to just two field goals in the second half after falling behind 17-9 at halftime.

The Mountaineers tried to rally after White's score. But D'Jordan Strong intercepted Zac Thomas' fourth-and-22 pass and returned it 38 yards for a touchdown.

AMES, Iowa -- Brock Purdy passed for 236 yards and three touchdowns as Iowa State beat Kansas State for its most lopsided win over the Wildcats in 77 years.

Iowa State (6-2) improved to 6-1 in the Big 12, matching the school record for conference wins.

The Cyclones hadn't had such a wide winning margin against the Wildcats since they beat them 48-0 in 1943. It was their biggest win over a Big 12 opponent since beating Kansas 45-0 three years ago.

Kansas State (4-4, 4-3), which won 11 of the previous 12 meetings, started to unravel after failing to score on an early first and goal from the 3.

Purdy completed 10 of his first 12 passes for 156 yards to six receivers and all 3 of his touchdowns. Breece Hall ran for 135 yards and 2 touchdowns on 13 carries.

Liberty (8-1) was trying to earn a third win against an Atlantic Coast Conference opponent this year, all on the road. The Flames had their shot to extend the best start in program history, too, putting together a drive to give Barbir a shot at the lead.

But Vi Jones deflected the kick to set off a celebration for the Wolfpack (6-3).

Zonovan Knight ran for two touchdowns to lead N.C. State, including the go-ahead 4-yard score with 6:53 left. That play was set up by a diving interception from true freshman reserve Aydan White.

Knight also had a first-half touchdown run and ran for 96 yards.

Malik Willis threw for 172 yards and two touchdowns for Liberty but had three interceptions, two coming in the fourth quarter. 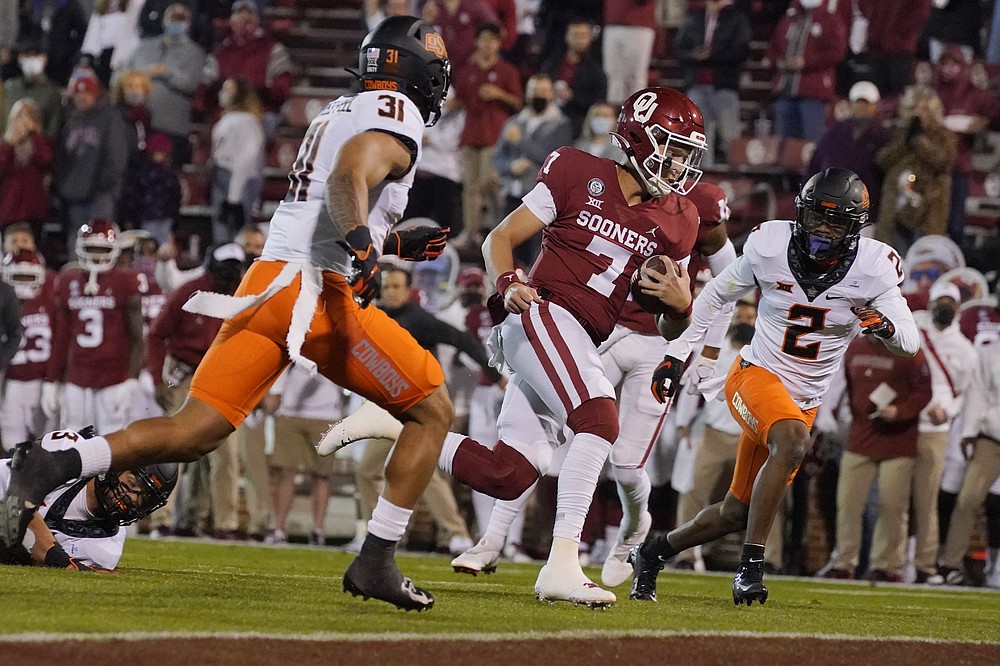 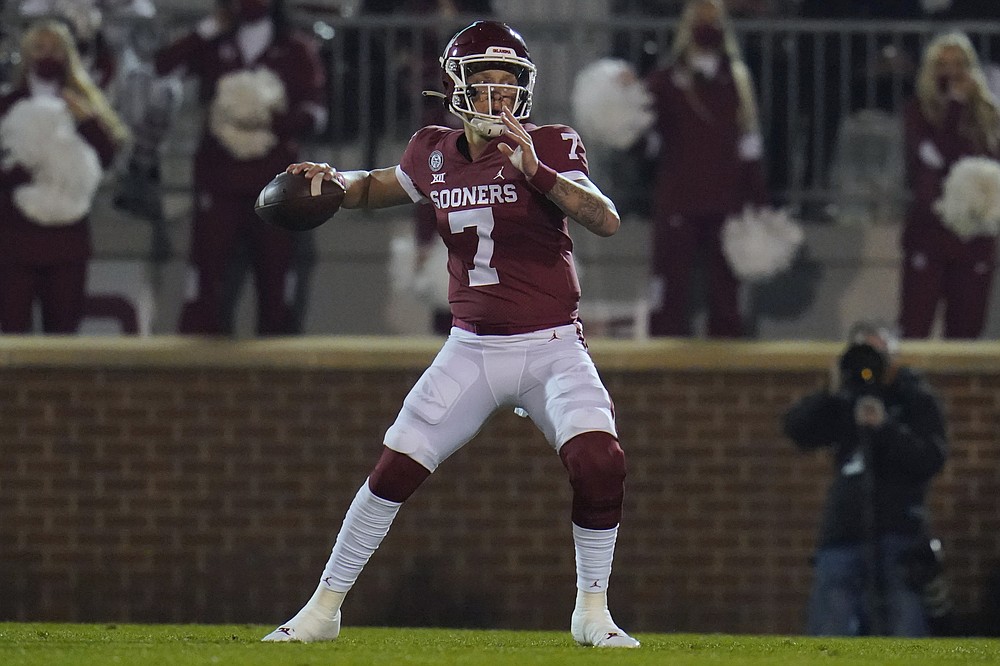 Oklahoma quarterback Spencer Rattler looks for a receiver during the first half of the team's NCAA college football game against Oklahoma State in Norman, Okla., Saturday, Nov. 21, 2020. (AP Photo/Sue Ogrocki) 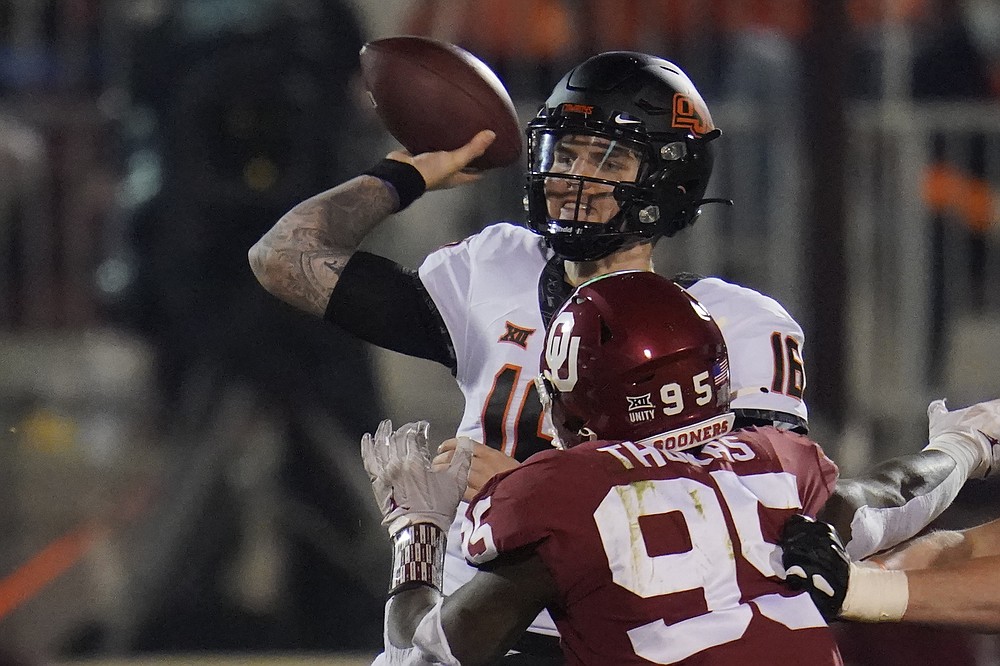 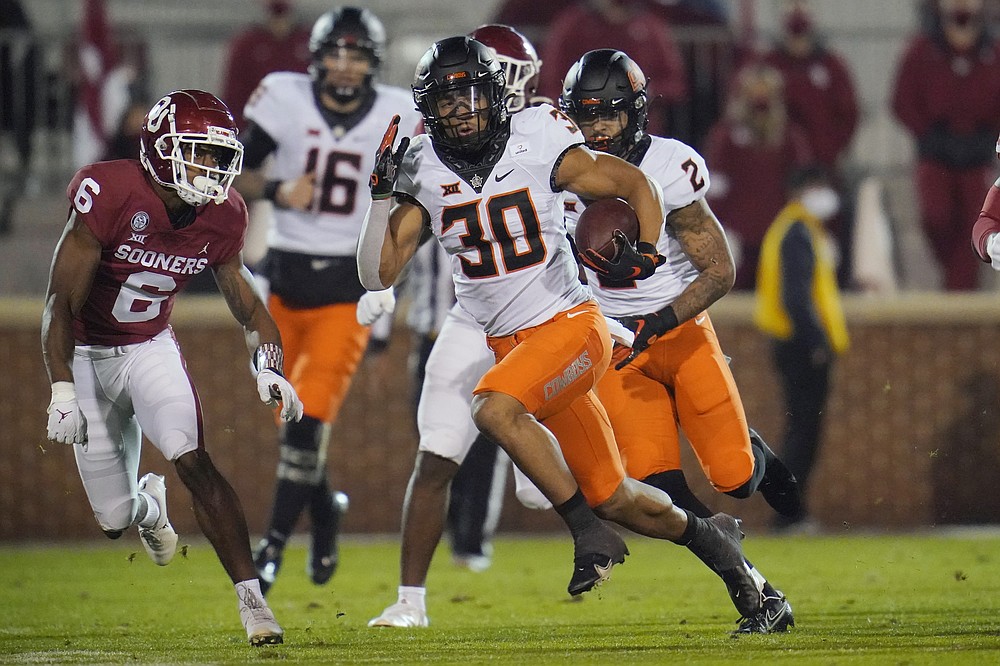 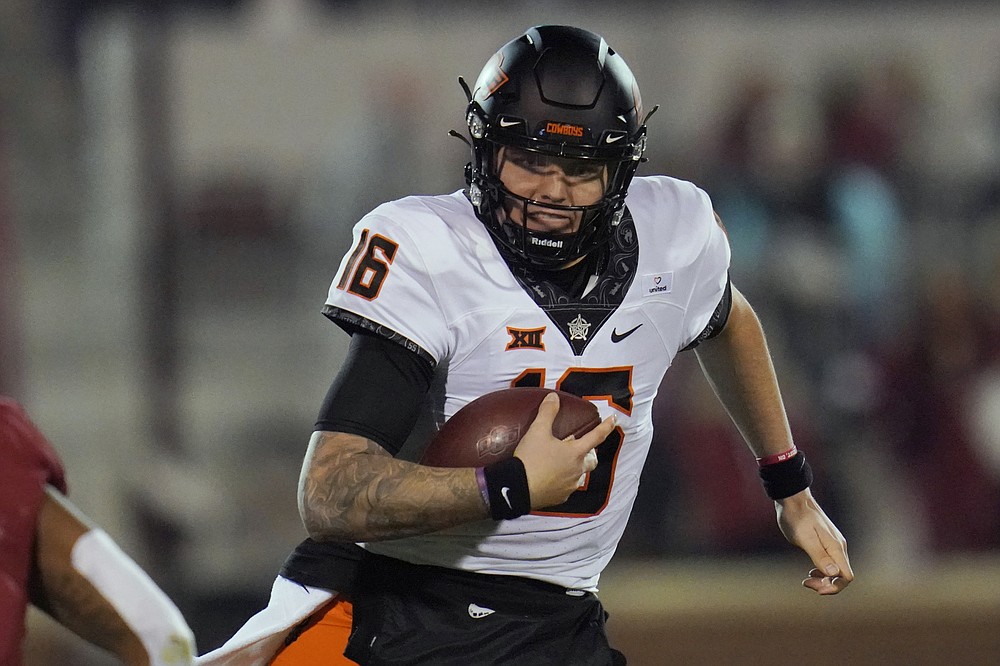 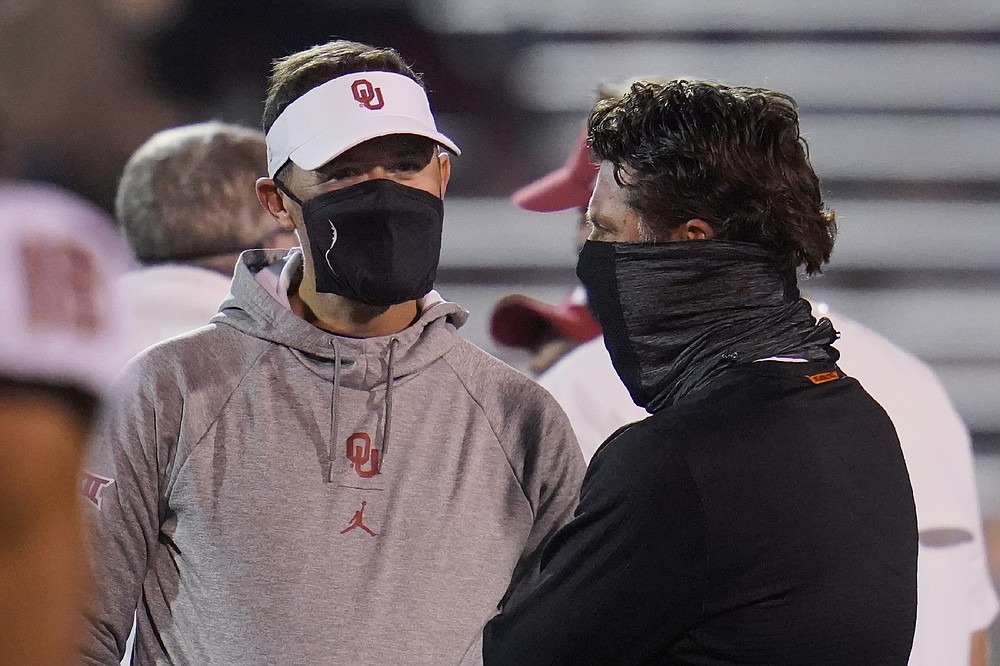