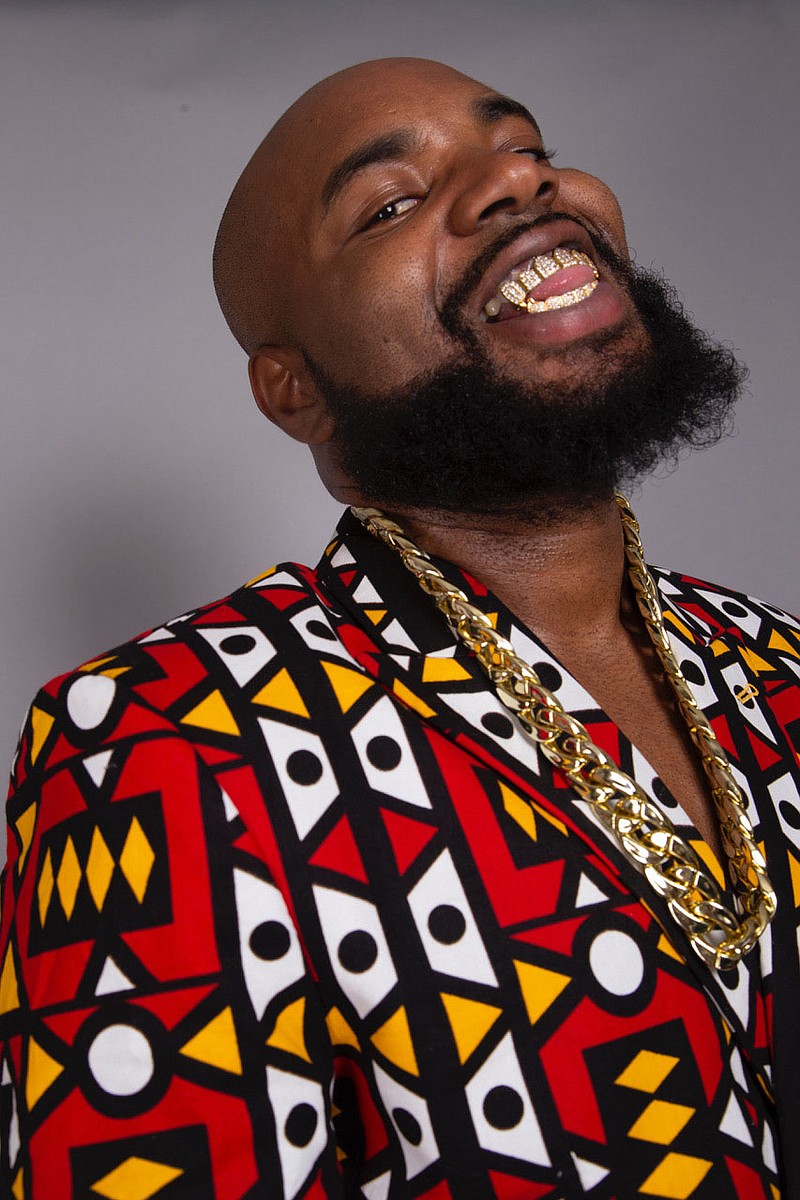 Austin Dean Ashford is the protagonist in his own alternate universe in “Sophisti-Ratchet,” a hip-hop single that introduces his radio play project with the same title. (Courtesy Photo)

Designated an artist to watch in 2020 by What's Up!, Austin Dean Ashford made an impact not only on the University of Arkansas arts community but around the world with his one-man show "(I)sland T(rap)." Written while he was a graduate student, it won Best One-Man Show Off-Broadway at Theatre Row during the United Solo Festival; won awards from the Kennedy Center and at the San Diego International Fringe Festival; and it was later developed as a film when he received the Fayetteville Film Prize at the 2018 Fayetteville Film Festival.

Now Ashford is pursuing a Ph.D. at Texas Tech University, and he's back with a new endeavor, "Sophisti-Ratchet," an audio drama he's launching this month with a hip-hop single by the same title.

Ashford took a few minutes out of his hectic schedule for a What's Up! Q&A.

Q. What have you been doing as a performer since January -- and particularly, since the pandemic started changing everything in March?

A. I was able to do some touring in Indiana, Wisconsin, Texas, Arkansas, Tennessee, Michigan and New Zealand during the short time from January to March, before covid-19 happened. As a musician, I was doing some concerts and began recording my first studio project. Since covid, I have been able to focus solely on recording and writing while I have been pursuing my Ph.D. instead of the typical touring and teaching at the same time.

Q. What -- or who -- was the inspiration for "Sophisti-Ratchet"?

A. I was a speech and debate nerd for a long portion of my life, and in that activity, rhetoric and argumentation was considered sophisticated, and I would be in a lot of elite, sophisticated spaces, but I was also still a black boy from historically black Wiley College. I noticed that I did not like the idea of having to codeswitch so much. That led me to think about all the other people like me in the world who probably have to codeswitch a lot as well. Then boom! "Sophisti-Ratchet"! What if I told a story about a person who struggles with codeswitching in a fictional world? What if I offered a musical story for your ears that is Afrocentric and nuanced? Now "Sophisti-Ratchet" is a movement/lifestyle.

Q. Tell me about the protagonist of "Sophisti-Ratchet," Benn Broox. Who is he? And what is he doing in this moment that we pop into?

A. When I use to rap, my stage name was Benn Broox because a friend who taught me rap/poetry passed away, and I picked up his name as a stage name. Currently, in this project ... he exists in the city of Metroville and struggles to balance being a Ph.D. student at JFK University and throwing parties with his friends on the black side of town. The moment we pop into the story is when Benn and his friends host a party flop, and he considers quitting party promotions to bring theater to East Metroville. The codeswitching Benn Broox has to encounter is the code of language and systemic operation of institutions like the Ph.D. program, while at the same time still having the natural urban code of East Metroville and his friends from his ratchet party throwing days.

Q. When you say radio play, will it have all the bells and whistles and sound effects, etc., we might expect? Or is more of it based in the music?

A. When I say radio play, I do mean all of the bells and whistles! Yes, we will have sound effects, sound design, there will be multiple characters and dialogue that leads into music with heavy verses. This is literally a verse-based episodical just without the visual. Expect to hear a full story. I hope to see "Sophisti-Ratchet" become maybe a TV show and have some visuals to go with the audio portion. Hopefully this can open up my other pieces of work to come to the audio format during covid and beyond.

Q. What comes next for you??

A. There are so many amazing things up next! I will be done with my coursework for my Ph.D. in May! Then it is exams and dissertation until I'm Dr. Ashford -- the first person in my family lineage to have a Ph.D. after being a high school dropout. I am writing my fifth solo show at the moment, making music for other people's projects, keynote speaking, and writing pieces for the screen a lot more.

Watch the video at https://youtu.be/ewSpJWIuZcw

Stream the single at https://smarturl.it/sophistiratchet