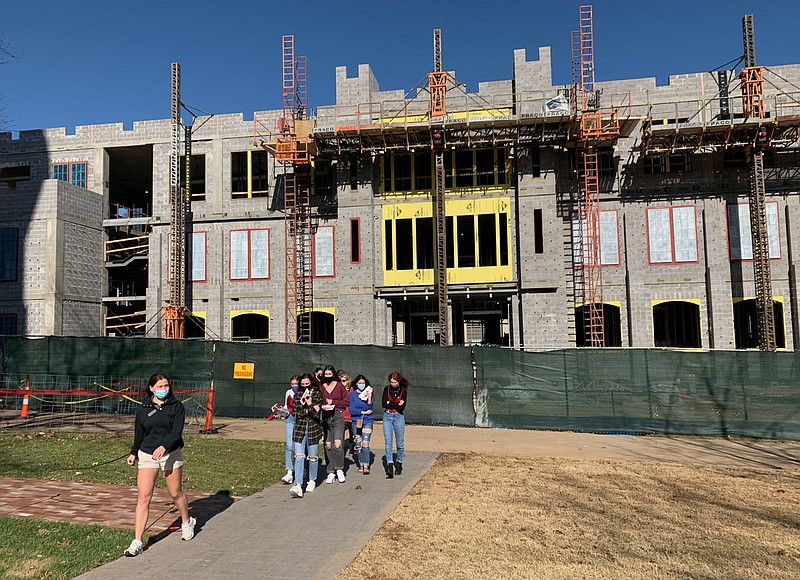 A group of visitors to the University of Arkansas campus is led on a tour Thursday, Nov. 19, 2020, as work continues on a Student Success Center on the university campus in Fayetteville. Visit nwaonline.com/201120Daily/ for today's photo gallery. (NWA Democrat-Gazette/Andy Shupe)

Millions of dollars that once went to local projects through checks doled out by state legislators now go to colleges, universities and other state-run institutions.

Corruption involving General Improvement Fund grants and misuse of state Medicaid funds led to convictions of five state legislators along with 11 now-former health care executives or lobbyists. Trials are pending for two others.

Federal investigators' first clues of widespread corruption in state government arose from abuse of General Improvement Fund money. A sixth former state lawmaker, a consultant and a private college president were also convicted for misuse of the fund money.

The fund consisted of interest earned on state accounts and the money left unspent at the end of each fiscal year. Each state lawmaker received a share of the money to give out to local governments, charities or other nonprofit groups.

Most of the improvement fund money went to local projects such as equipment for volunteer fire departments and repairs for activity centers for seniors, state records show.

Some went to projects such as, in one case, a fireworks show.

But a series of Improvement Fund grants going to a small private college in Springdale led to the discovery of a kickback scheme. Another grant by two of the same lawmakers led investigators to the health care executives and their lobbyist, who later proved to be behind a massive bribery scandal involving state and federal taxpayer money.

Gov. Asa Hutchinson cut local project money for lawmakers out of his budget proposals when the scandals came to light. On Oct. 5, 2017, the Supreme Court declared the fund's distribution process unconstitutional.

Since then, any money that would have formerly gone into the General Improvement Fund now is appropriated directly by the Legislature for specific projects. Any money left after those direct appropriations flows into a "Rainy Day Fund" overseen by state agencies or the governor's office. The Legislature, through the budget process, decides how much money goes to each agency and the areas where each appropriation can be spent.

The Legislature imposed a $30 million cap in 2019 on how much of that money can flow into the Rainy Day Fund. Fund balances can be carried over from one budget cycle to the next. Also, the Legislature can put other money in the fund.

In all, the Rainy Day Fund had almost $63 million available at the beginning of the current biennium,which began July 1, 2019, an Arkansas Bureau of Legislative Research report shows. That includes the capped $30 million, $15.8 million from other sources as approved by the Legislature and $16.9 million from the previous biennium.

The governor's spending out of the Rainy Day Fund must receive approval from the Legislative Council's Performance Evaluation and Expenditure Review Subcommittee, or the full Legislature if it's in session. As of Sept. 30, the latest date complete state reports are available, $49.2 million of that $62.9 million was spent.

The biggest portion by far, state records show, is the $12.4 million distributed by the Arkansas Economic Development Commission. The commission issues grants to local governments and nonprofit groups.

Next up on the spending list is the state's Department of Higher Education with $6.7 million. Of that, $5.1 million went to construct, acquire or repair facilities at state colleges and universities. Another $1.6 million went to scholarships and other assistance to historically Black colleges and universities. That $6.7 million overall figure doesn't include several grants to specific state colleges or universities, such as $2.7 million to the University of Arkansas.

Hutchinson's proposed budget for the next 2021-2022 biennium would transfer $25 million of the state's current budget surplus to the rainy day fund.

Hutchinson in February gave $1 million of the rainy day fund to support senior centers across the state. He also has spent $3.7 million to help buy out a large-scale hog farm that was operating within the Buffalo River watershed. He gave the Arkansas State Fair Association $1 million in 2018 to distribute as needed to county fairs. 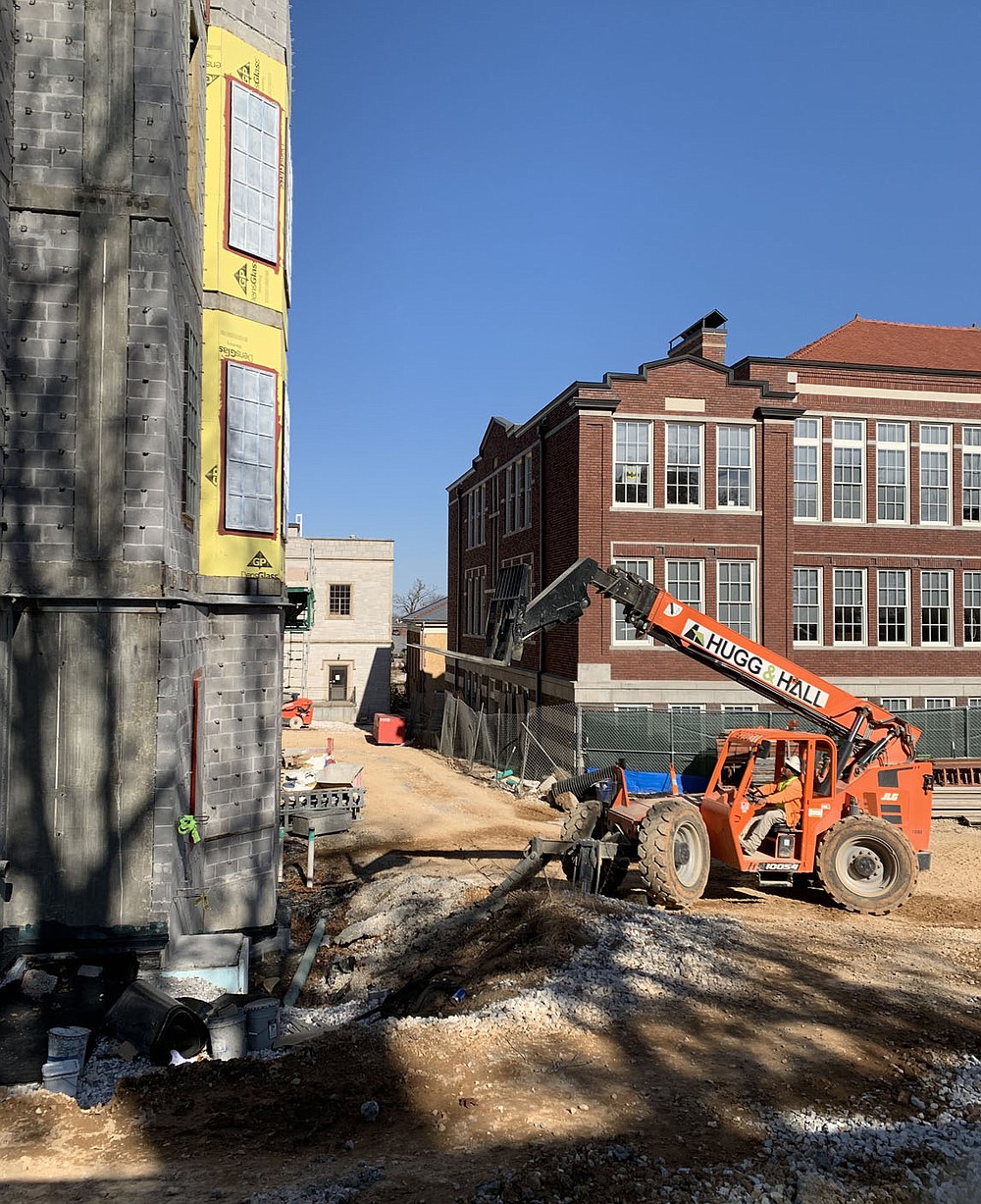 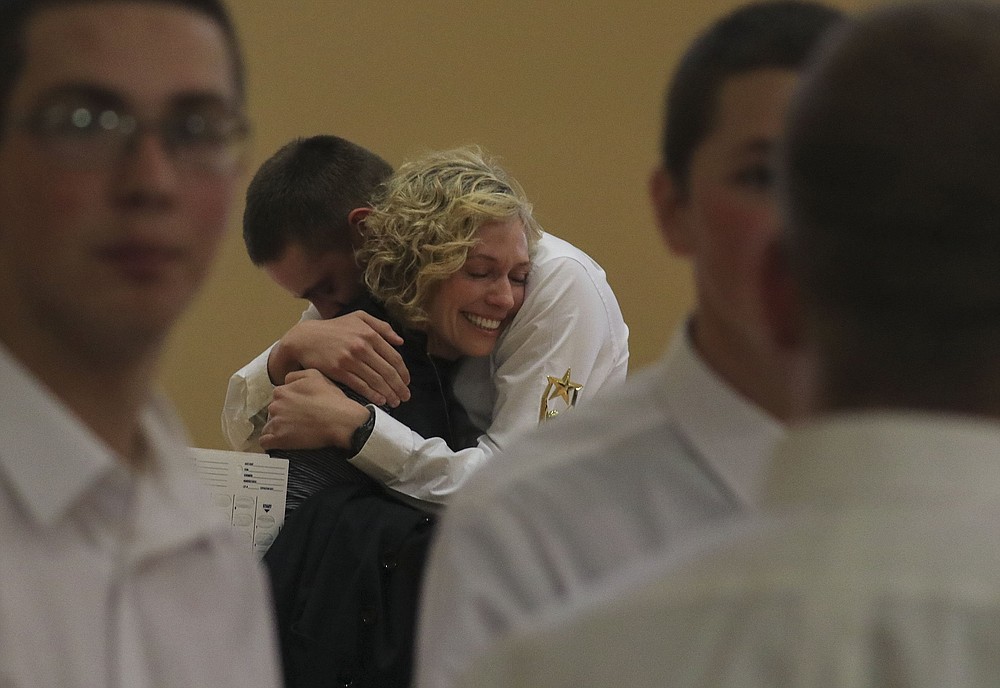 To view the allocations, visit: www.nwaonline.com/giffund1122/