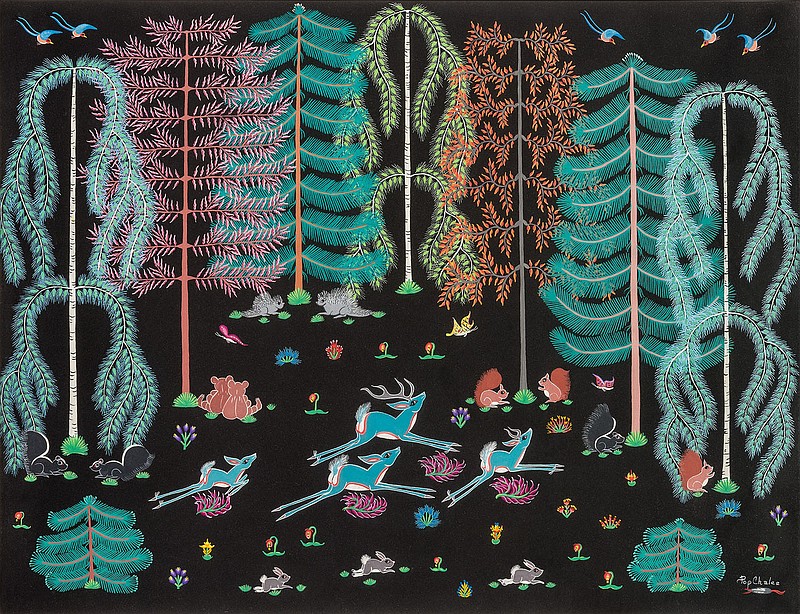 “Enchanted Forest” by Pop Chalee, also known as Merina Lujan (Taos Pueblo), is part of the “Companion Species” exhibition. “Storytelling was a way for us to connect across cultures, so we are thinking also of reciprocal relationships and very intentionally putting Native and non-Native artists together,” shares Mindy Besaw, curator, American art, and director of fellowships and research at Crystal Bridges. (Courtesy Photo/Crystal Bridges Museum)

The coronavirus shutdown of all our arts institutions may have delayed the debut of a new, important collaboration, but it certainly didn’t stop it. This weekend, “Companion Species” opened at Crystal Bridges Museum of American Art in Bentonville, welcoming back a Native artist and a special artwork created on the museum’s own grounds.

Marie Watt, a member of the Seneca tribe, was part of the 2018 exhibition “Art for a New Understanding: Native Voices, 1950s to Now.” Mindy Besaw, curator, American art, and director of fellowships and research at Crystal Bridges told What’s Up! in a discussion at the time that the temporary exhibition invited viewers to consider American art from Indigenous people’s perspectives in a contemporary context rather than the antiquated idea often framing the Native experience: that Indigenous people’s culture is “stuck in the past.”

The new temporary exhibition is anchored around Watt’s monumental textile piece “Companion Species (Speech Bubble),” which she created through sewing circles in her home city of Portland, Ore.; in Hawaii; in northeast Oklahoma; and during her 2018 residency here in Northwest Arkansas.

“Marie considers sewing circles what she calls quiet activism, because with busy hands and looking at the piece that you’re sewing, it’s maybe easier to talk to someone sitting next to you,” Besaw shares. “You’re able to build these connections with maybe someone that you’ve never met before, or that you might not find yourself with in a general situation. She considers this a form of community building, of activism, to bring people together around one common activity — in this case, stitching. We are very excited that this is an object at Crystal Bridges Museum because it does have our community literally stitched into it.”

The museum acquired “Companion Species (Speech Bubble)” last year after its completion, and the new focus exhibit will be its Northwest Arkansas premiere. The piece will also be in conversation with objects and historical artifacts from the Museum of Native American History in Bentonville as “Companion Species” is a collaborative exhibition between the two institutions.

Organizers wanted the project to be more than just mixing collections, Besaw explains. Though there is an exchange of items between the two partners to build new connections among the pieces, Besaw says, during the planning stages, one major theme emerged to engender a story-driven and content-driven venture.

“Marie talks about the importance of being related and developing reciprocal relationships with your companion species, which might also be animals,” Besaw reveals. “For many of us right now, we really do connect with our pets, for example, as those companions in our everyday lives. But if we take that a little bit broader and think about reciprocal relationships with the environment, with nature, with trees, and that need to acknowledge and respect what nature is giving us and in exchange, be more respectful of nature.

“So, it’s this ability to see how we are all related, and how our actions impact animals, nature, etc., and how all of that is just a ripple effect.”

Representations of and connections to animals, in particular, throughout the works also became evident as the exhibition began to take shape, Besaw shares. Through stories, metaphor and references to community, cross-cultural connections are established very intentionally.

“An exhibition like ‘Companion Species’ is significant because it allows visitors to expand their own understanding of art by artists who come from various backgrounds, cultures and time periods. The interaction between the audience and the exhibition can result in moments of empathy through recognizing our differences and celebrating our similarities,” offers Ashley Holland, assistant curator with the Art Bridges Foundation, a partner for the exhibit.

“The Art Bridges collection wants to ensure that all communities see themselves within the art they encounter and feel welcome,” she goes on. “This includes art by Indigenous peoples, who have a complicated and often traumatic history with museums as a result of being colonial tools of erasure and dehumanization.”

“What we do at the Museum of Native American History is we teach diversity, and we teach 14,000 years of history you probably didn’t learn in school,” MONAH founder David Bogle has told What’s Up! of the museum’s mission. Though MONAH remains open only online at present, “Companion Species” will further that charge by connecting viewers through visual, aural and emotional stories.

“Having those little moments of [realization that] stories aren’t just important for Native culture,” Besaw posits, “think of all the stories you’ve grown up with, I’ve grown up with. We might just use them differently, but it is a through-line.” 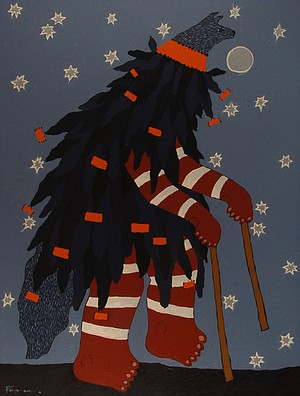 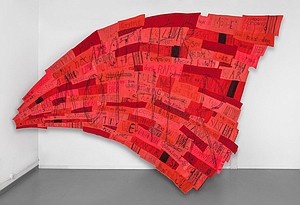 Marie Watt’s (Seneca) textile piece “Companion Species (Speech Bubble)” was created, in part, by Northwest Arkansas hands at sewing circles during Watt’s 2018 residency at Crystal Bridges Museum. The work is the foundation for the new “Companion Species” exhibition that opened last weekend at Crystal Bridges and will spread across the Museum of Native American History as well in the near future. 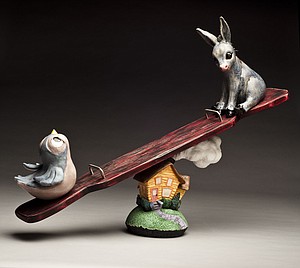 “What Will You Give Me If I Let You Down?” by American artist Kristen Cliffel is part of the new focus exhibition “Companion Species.” The exhibition is a collaboration between Crystal Bridges Museum and the Museum of Native American History in Bentonville and presents the work of Native and non-Native artists in conversation. (Courtesy Photo/Crystal Bridges Museum; by Dan Fox)

WHEN — On display through May 24

WHERE — Crystal Bridges Museum in Bentonville and online

FYI — MONAH is working on re-opening plans and will announce exhibition dates soon at monah.us.