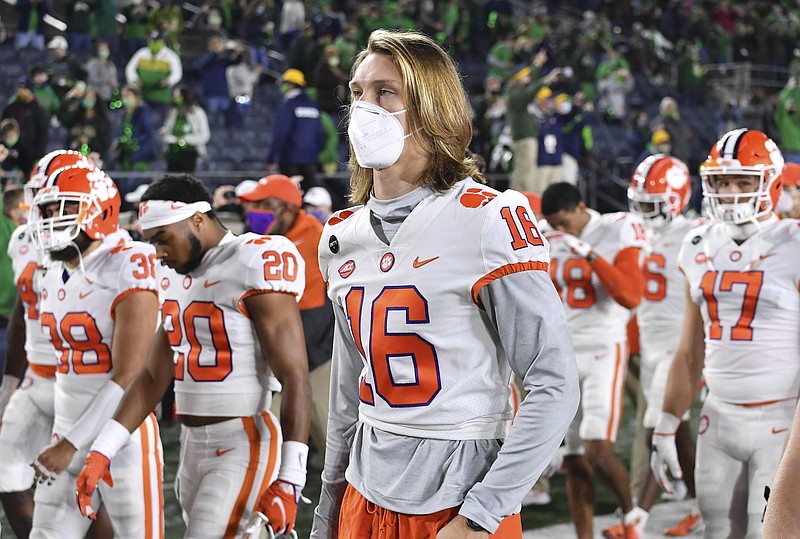 FILE - In this Saturday, Nov. 7, 2020 file photo, Clemson quarterback Trevor Lawrence (16) leaves the field with his teammates after Clemson lost to Notre Dame 47-40 in two overtimes during an NCAA college football game in South Bend, Ind. As virus disruptions mount and the Dec. 19 end of college football's regular season draws closer, the possibility grows that conference championships, major awards and even College Football Playoff participants will be determined by COVID-19. (Matt Cashore/Pool Photo via AP, File)

The game between No. 4 Clemson and Florida State was postponed hours before kickoff Saturday when medical personnel from both schools could not agree it was safe to play.

The Tigers learned a day earlier one of their players tested positive for covid-19, a person with knowledge of the situation told The Associated Press.

The Atlantic Coast Conference announced the postponement, although it did not detail whether the game at Florida State was called off because of coronavirus issues.

The person who spoke to the AP on condition of anonymity said the postponement stemmed from a positive test Clemson received Friday after traveling to Tallahassee, Fla. That unidentified player had tested negative on campus last week despite displaying symptoms.

The person did not wish to be identified because Clemson had not disclosed the reason for the postponement.

Another person with knowledge of the decision told AP that Florida State officials were informed late Friday night that Clemson had an offensive lineman return a positive test earlier in the day. The person said Clemson officials told Florida State that the Tigers player had taken part in practice and meetings throughout the week while showing symptoms.

The second person also spoke to AP on condition of anonymity because the schools were not publicly revealing details about why the game was off.

Medical officials and athletic directors from both schools held another call Saturday morning to exchange medical reports, which is routine under ACC protocol. During that call, the schools could not agree on playing.

"We listened to our medical folks and their assessment of the risk, and we decided it wasn't safe to play today," Florida State Athletic Director David Coburn told the AP.

No makeup date was announced, but Florida State Coach Mike Norvell said he hoped it would be in December.

"We woke up this morning ready to play this game," Norvell told ESPN.

The first-year coach tested positive for the virus in September, missing the Seminoles' game with Miami.

The Seminoles are scheduled to play Virginia next Saturday.

Star Clemson quarterback Trevor Lawrence was scheduled to make his first start since Oct. 24. He has missed the past two games, including a 47-40 double-overtime loss at Notre Dame, after testing positive for covid-19.

Clemson Athletic Director Dan Radakovich said the school had followed all ACC protocol in the week leading to the game.

On Friday, Clemson said in its weekly report on virus testing that 18 members of the athletic department tested positive this week, including 13 athletes. The school does not detail which athletes or sports are involved.

Wake Forest's game at Louisville will be played Dec. 19 instead of Nov. 28. The Demon Deacons' game with Duke, which was called off for this week, will not be rescheduled.

Duke Coach David Cutcliffe said canceling the Wake Forest game was the right thing to do given what his players have dealt with this season.

"Our players have been explicitly compliant, and continuing their isolated housing conditions without academic nor social settings for an additional two weeks would not be appropriate in this unsettling time," Cutcliffe said in a statement.

There have been 18 postponements this week out of 62 scheduled games. It is the 81st on the season since schedules were set in late August and believed to be the first game postponed on the day of the game.