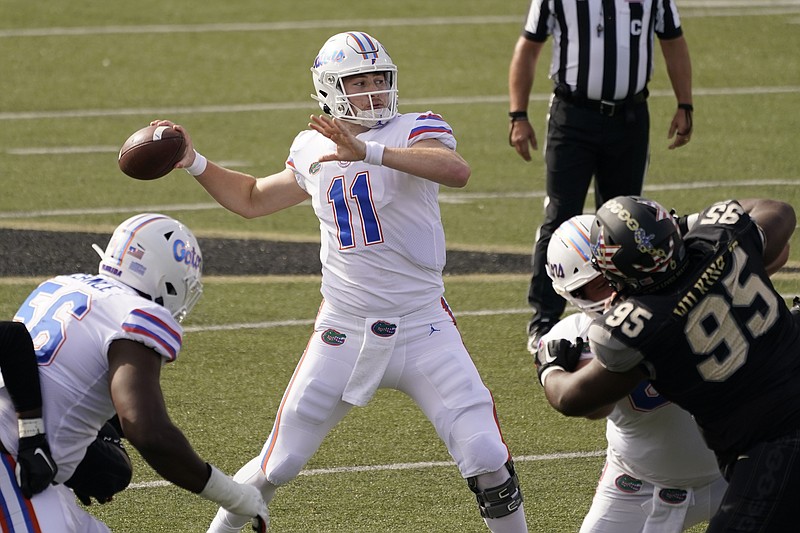 TUSCALOOSA, Ala. -- Alabama didn't quite look like itself at first after an extended period on the sidelines, but it scarcely made a difference on the scoreboard.

DeVonta Smith caught 9 passes for 144 yards and set the SEC career record with 2 more touchdowns in the top-ranked Crimson Tide's 63-3 victory over short-handed Kentucky on Saturday.

Mac Jones passed for 230 yards and 2 touchdowns, and Najee Harris ran for a pair of scores for the Tide (7-0), both in less than three quarters. A slow start turned into a breezy return from a three-week layoff after LSU was forced to call off last week's scheduled game because of covid-19 troubles.

The outmanned Wildcats (3-5) were missing a number of key players because of injuries or coronavirus protocol. They were competitive early on the stat sheet, but it didn't hold up particularly long on the scoreboard after they gave up three second-quarter touchdowns.

"I know you're going to look at the score and say, 'Man, there's not a lot of good things.' But there was," Kentucky Coach Mark Stoops said. "Early in the game, I thought our guys were playing extremely hard, extremely physical."

Smith broke Amari Cooper's SEC and Alabama record with his 32nd touchdown catch, a 10-yarder from Jones in the second quarter. He added an 18-yarder from freshman backup Bryce Young.

"It's certainly a blessing to have my name with all the greats that came to the SEC and this school," Smith said.

NASHVILLE, Tenn. -- Kyle Trask passed for 383 yards and three touchdowns, and No. 6 Florida rallied from an early deficit to beat Vanderbilt.

The Gators (6-1) pulled into Vanderbilt Stadium an hour before kickoff already in uniform, hoping to avoid the visitors locker room as a coronavirus precaution. The Commodores (0-7) opened the game by driving for a touchdown, but Trask helped get Florida on track for its seventh consecutive win in the series.

Trask, a Heisman Trophy hopeful, completed 26 of 35 passes to nine different receivers. He is the first quarterback in SEC history to accrue 30 touchdown passes in seven games.

ATHENS, Ga. -- JT Daniels made quite a debut between the hedges, throwing for 401 yards and four touchdowns as No. 13 Georgia held on for a victory over Mississippi State.

Playing for the first time since the 2019 opener with Southern Cal, Daniels became the third quarterback to start for the Bulldogs (5-2) this season.

The transfer from USC delivered one big play after another, capped by a 40-yard touchdown pass to Kearis Jackson that broke a 24-24 tie with 9:50 remaining. What made it more impressive: Jackson and George Pickens had dropped potential TD passes on back-to-back plays, and a holding penalty left Georgia with third-and-20.

But Jackson slipped behind the secondary in the middle of the field, and Daniels spotted him to finally finish off pesky Mississippi State (2-5).

Daniels became the first Georgia quarterback to pass for more than 400 yards since Aaron Murray against Auburn in 2013.

AUBURN, Ala. -- Smoke Monday returned an interception 100 yards for a touchdown and No. 23 Auburn overcame a slow start to beat Tennessee.

Auburn (5-2) fell behind 10-0 to Tennessee (2-5) and dealt with injuries to star running back Tank Bigsby and its two starting offensive tackles. The Tigers were playing their first game in 21 days after a scheduled off week and the postponement of a game at Mississippi State.

Bo Nix completed 17 of 26 passes for 220 yards, with a 54-yard touchdown to Anthony Schwartz and his first career interception in a home game. Tennessee's Jarrett Guarantano started strong, but finished with only 156 yards of passing and the interception return for a touchdown that gave Auburn a two-score lead late in the third quarter.

Tennessee had its best offensive outing in weeks, yet struggled after halftime. The Volunteers have been outscored 108-14 in the second half during their five-game losing streak.

COLUMBIA, S.C. -- Connor Bazelak threw for 203 yards and a touchdown as Missouri held off a late surge by South Carolina.

Larry Rountree III rushed for a score and became the Tigers all-time rushing leader among running backs as the Tigers (3-3) won after not playing since Oct. 31 due to a bye week and a postponed game with Georgia because of covid-19 issues.

It was the fourth consecutive loss for South Carolina (2-6), which fired Coach Will Muschamp last Sunday and took a half to get itself going.

Bazelak and the Missouri offense weren't crisp. Then again, they didn't have to be as the Tigers opened up a 17-0 lead by halftime and kept the Gamecocks off balance much of the way.

South Carolina managed just 68 yards and five first downs in the opening half, punting five times and failing to convert a fourth down in six series before halftime. 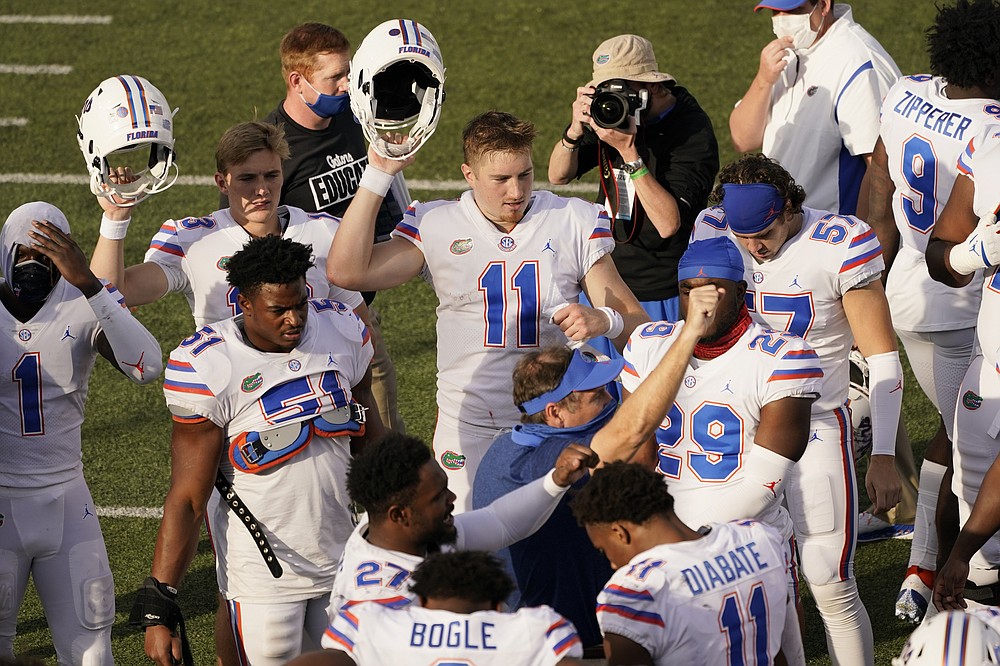 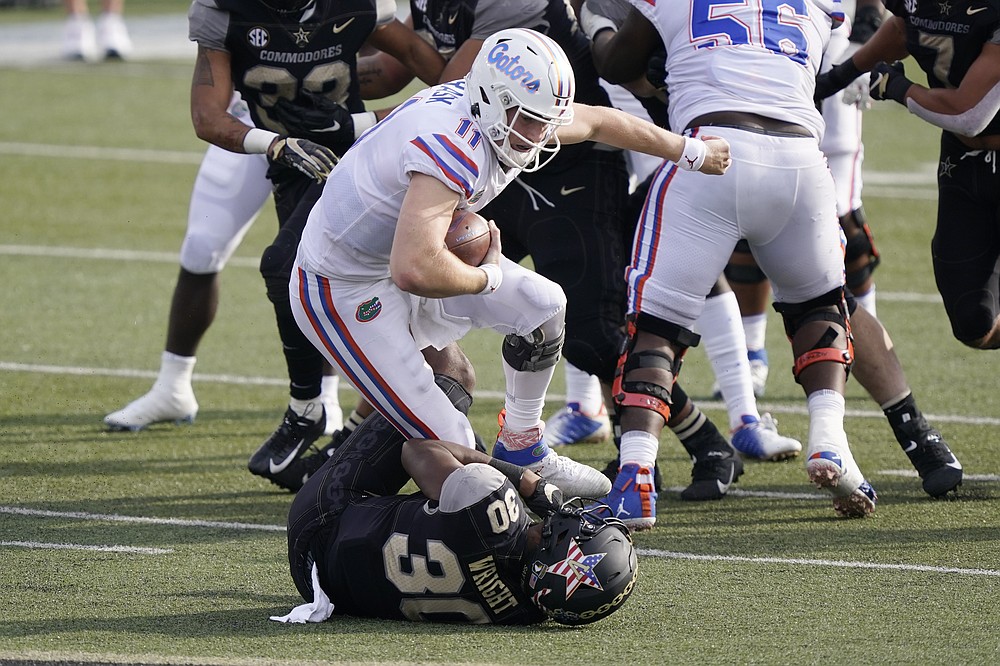 Florida quarterback Kyle Trask (11) is brought down by Vanderbilt'a De'Rickey Wright (30) in the second half of an NCAA college football game Saturday, Nov. 21, 2020, in Nashville, Tenn. (AP Photo/Mark Humphrey) 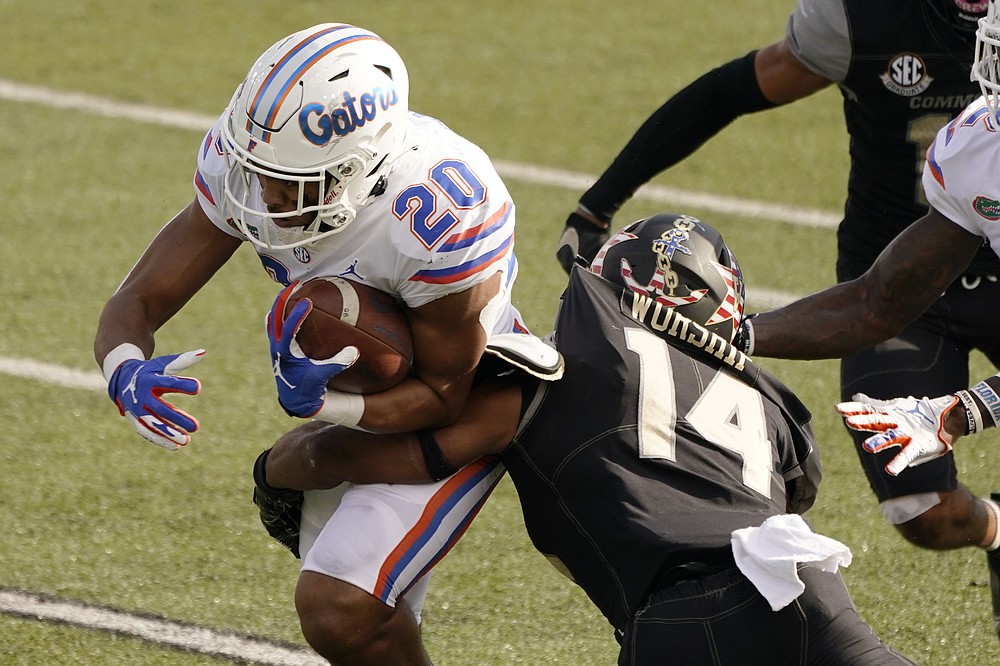 Florida running back Malik Davis (20) is hit by Vanderbilt safety Maxwell Worship (14) in the second half of an NCAA college football game Saturday, Nov. 21, 2020, in Nashville, Tenn. (AP Photo/Mark Humphrey) 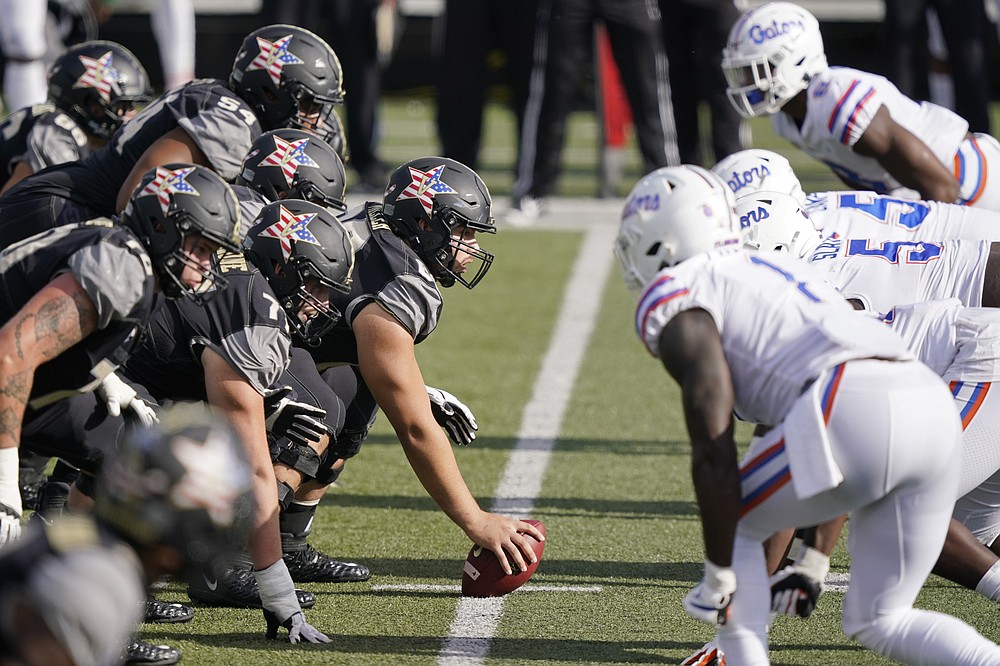 Vanderbilt lines up against Florida in the second half of an NCAA college football game Saturday, Nov. 21, 2020, in Nashville, Tenn. (AP Photo/Mark Humphrey) 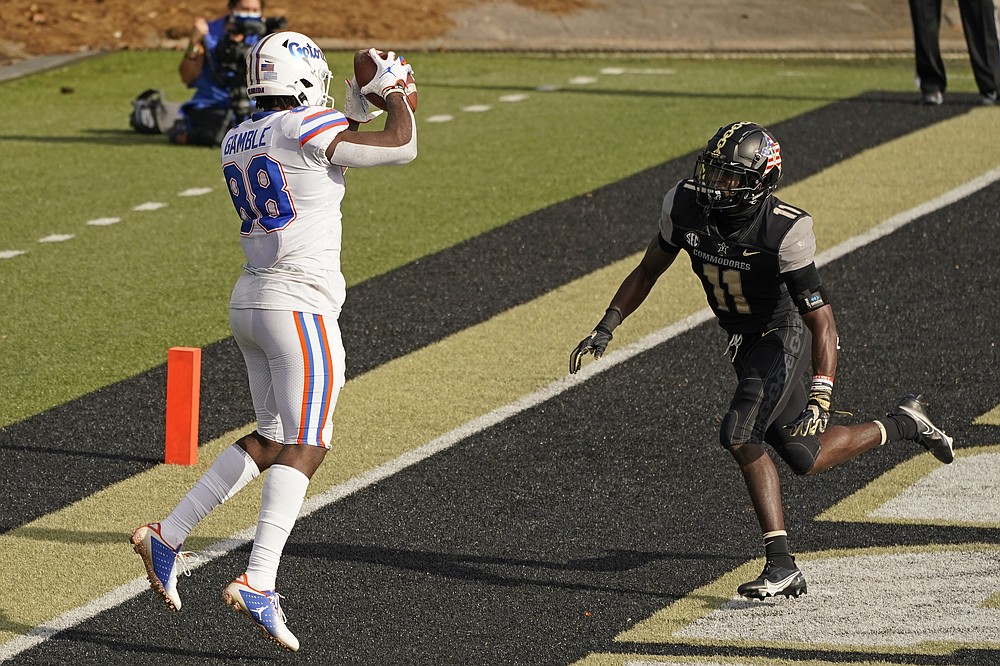 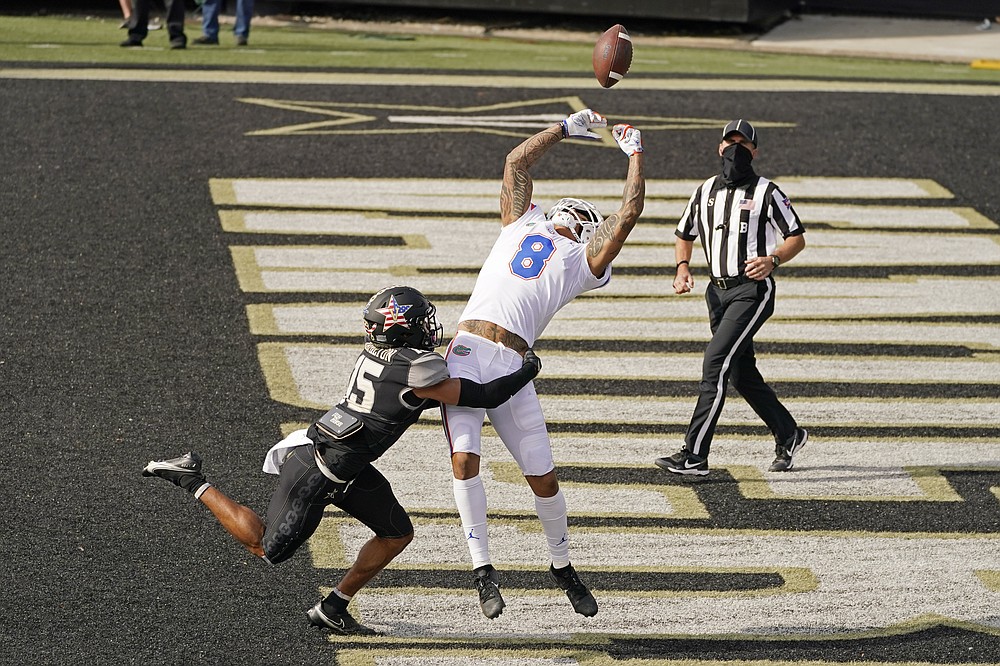 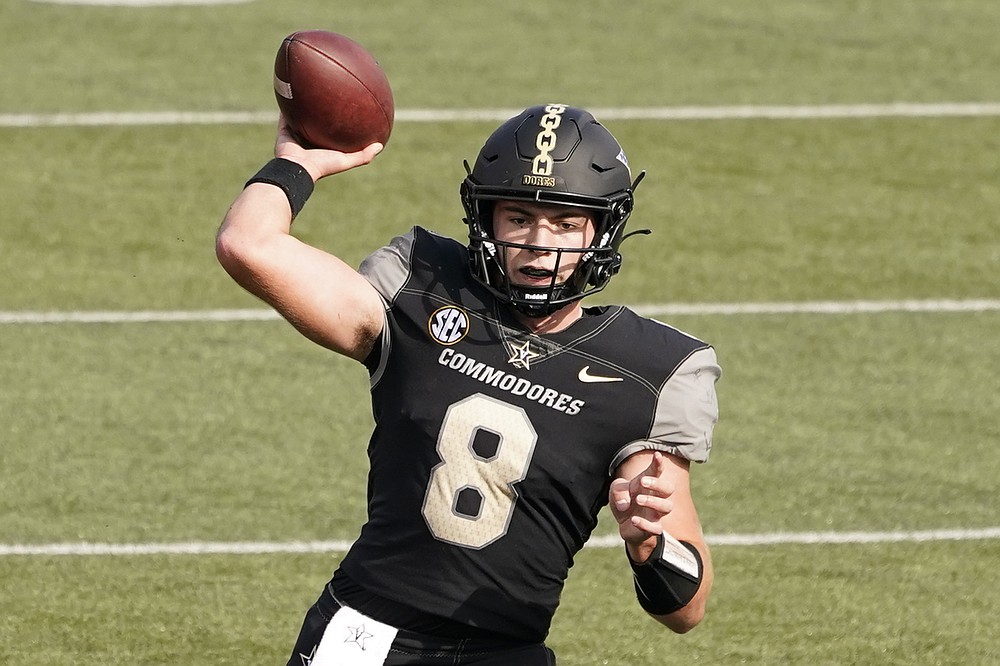 Vanderbilt quarterback Ken Seals (8) passes against the Florida in the first half of an NCAA college football game Saturday, Nov. 21, 2020, in Nashville, Tenn. (AP Photo/Mark Humphrey)