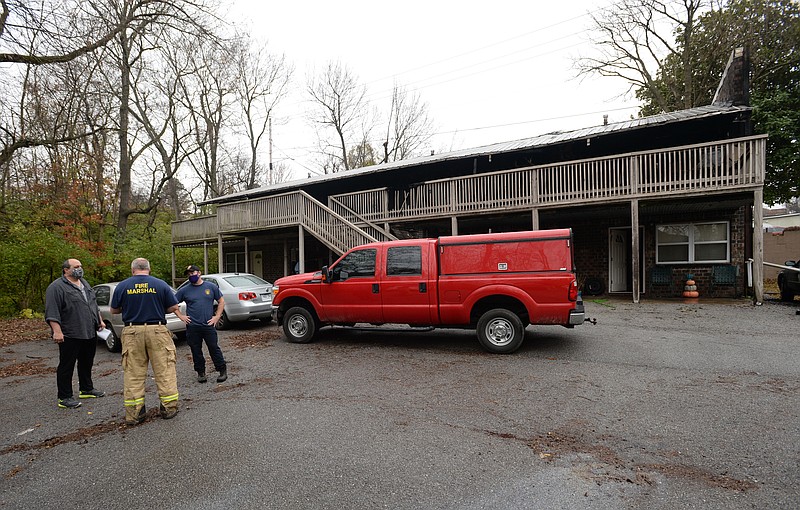 Personnel from the Fayetteville Fire Marshal's office collect information Saturday, Nov. 21, 2020, after a fire at the Myers Apartments on South Gregg Avenue in Fayetteville. One person died in the fire and two more were injured according to fire department officials. Visit nwaonline.com/201122Daily/ for today's photo gallery. (NWA Democrat-Gazette/Andy Shupe)

FAYETTEVILLE -- A woman died and two men were seriously injured after an early morning fire at an apartment Saturday.

The call came in at 3:16 a.m. to a two-story apartment complex at 601 W. Center St., just west of South Gregg Avenue and the Frisco Trail. Firefighters saw heavy smoke and fire coming from the building, Fire Marshal Jeremy Ashley said. Bystanders outside told responders people were inside the building, he said.

Firefighters got the flames under control quickly and started rescue operations. Three people were trapped inside one of the second-story units, Ashley said.

"The fire had done a lot of structural damage to the second-story deck," he said. "Our guys made entry both though a window and also the front door."

The woman died at the scene, Ashley said. Two men were taken to Washington Regional Medical Center with serious injuries. One of the men later was taken to a hospital in Little Rock.

Officials withheld the woman's name pending notification of her family. Firefighters suspect she died of smoke inhalation, but a medical examiner will determine the cause of death, Ashley said.

Ashley said it's been at least two years since the city had a fatal fire.

"It's a horrible tragedy," he said "Other tenants were very lucky to get out."

Daniel Gomez and Jamia Davis were asleep when their dog, Prince, started barking and woke up Davis. She went outside and saw flames coming from a nearby unit on the second floor, and told Gomez.

Gomez said he thought someone was shooting at the building because he could hear pops. He went outside, where Davis was screaming, trying to get the neighbors to come outside. Two off-duty Bentonville firefighters who happened to be near the area also were knocking on doors.

"I looked to my left and saw the whole apartment complex in flames," Gomez said.

The two ran downstairs to the parking lot and could see flames rolling over the building.

"It was just crazy to me how fast it was spreading," Davis said.

The two-story building, with three units on top and three on the bottom, was charred. Most of the damage was concentrated in the two units in the top right corner, but the fire rendered the entire building unlivable, Ashley said.

Tenants and their family members sifted through what remained of their belongings by afternoon. The Red Cross was there to provide aid.

Gomez and Davis said they felt fortunate. Although they lived upstairs where the fire started, the damage wasn't as bad as in other units, and they escaped with their lives. Their dog also was OK. 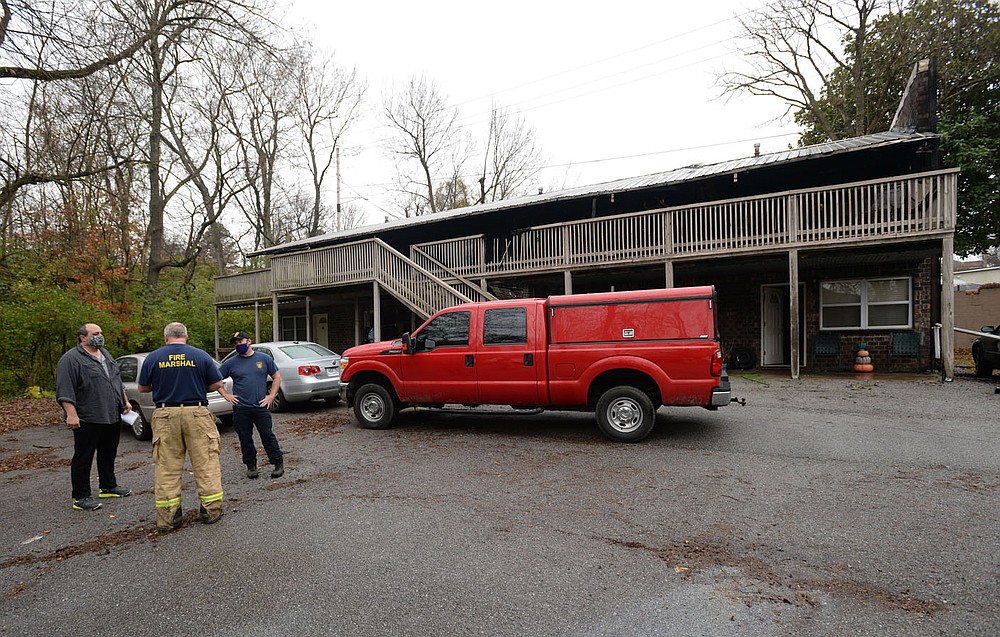 Personnel from the Fayetteville Fire Marshal's office collect information Saturday, Nov. 21, 2020, after a fire at the Myers Apartments on South Gregg Avenue in Fayetteville. One person died in the fire and two more were injured according to fire department officials. Visit nwaonline.com/201122Daily/ for today's photo gallery. (NWA Democrat-Gazette/Andy Shupe)