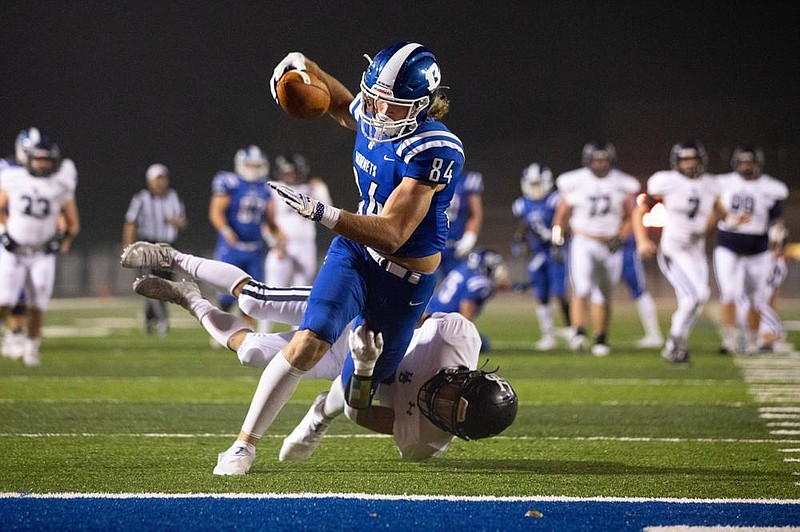 Bryant receiver Hayden Schrader (84) scores against Springdale Har-Ber during Friday’s Class 7A playoff quarterfinal at Hornets Stadium in Bryant. Schrader caught 10 passes for 201 yards and 4 touchdowns as Bryant won 48-22 to advance to a semifinal against Conway. More photos at arkansasonline.com/1121harberbryant/. (Arkansas Democrat-Gazette/Justin Cunningham)

The senior caught 10 passes for 201 yards and 4 touchdowns as the reigning two-time state champions knocked off Springdale Har-Ber 48-22 in the quarterfinals Friday night at Hornets Stadium.

Senior quarterback Austin Ledbetter completed 20 of 27 passes for 323 and 5 touchdowns for Bryant (11-0), which used a big first-quarter to put Har-Ber in a hole it couldn't dig itself out of. The Hornets opened up a 21-point lead over the game's first 11 minutes and never wavered despite the Wildcats' attempts at rallying in the second half.

"We started out really good, we really did," Bryant Coach Buck James said. "But we got a little lax there before the half, offensively and defensively. We lost our focus and we can't do that. That's what I told them at halftime and after the game.

"Once we got up, we had a letdown. We didn't tackle well, had too many penalties. ... just got sloppy and had a lack of concentration. But we did do what we needed to do, and I'm happy about that."

Senior running backs Tanner Anderson, Jamarien Bracey and Xavier Foote combined for 160 yards rushing and two touchdowns for the Hornets, who will make a third consecutive appearance in the semifinals next week when they face 7A-Central foe Conway.

Sophomore running back Hudson Brewer carried 23 times for 130 yards while senior quarterback Noah Livingston had two touchdown passes for Har-Ber (5-7), which had success moving the ball at times but couldn't sustain enough drives to put a dent in the Hornets' lead.

"Going into the game, we talked about how [Bryant] would come out, and it'd be like a tidal wave," Har-Ber Coach Chris Wood said. "Those 21 points in that first quarter, that was tough. We settled down after that.

"We stayed with them in that third quarter before they were able to finish it off in the fourth. But our kids fought the whole game, fought to the very end. That's just the character of these young men."

The Wildcats had a tough time dealing with Schrader, who broke the school's single-season receiving record with his 47-yard touchdown catch midway through the second quarter. In fact, all four of his scores came in the first half as Bryant scored on its first five possessions.

The Hornets took a 7-0 lead with 9:29 left in the first quarter when Ledbetter polished off a 10-play, 81-yard drive by hitting Schrader for a 27-yard touchdown. Ledbetter added two more scores before the end of the period -- a 12-yarder to sophomore wide receiver Cory Nichols and a 43-yarder to Schrader -- to build a 21-0 cushion.

Har-Ber gambled its way back into Friday's game.

On the driving following Schrader's touchdown, the Wildcats faced a 4th-and-8 from their own 40 and picked up the first down after the Hornets were called for pass interference. Six players later, junior running back Lane Reiter sprinted 30 yards up the middle for a touchdown with 10:10 left in the second quarter.

Bryant needed less than two minutes to respond. Ledbetter tossed a 12-yard dart to Schrader with 8:28 showing to push the Hornets' lead to 28-7. The duo hooked up again on the next Hornets' series when Schrader dove over the left pylon to complete his 47-yard touchdown.

Har-Ber scored just before halftime on a 30-yard touchdown pass from Livingston to junior wide receiver Ethan Fender with 10 seconds left in the period. But the Wildcats weren't able to close that gap over the final two quarters.

Bracey and Foote added touchdowns runs in the second half while Livingston tossed a 12-yard touchdown to junior wide receiver Peyton McKee midway through the fourth.

"We could've been better, though," James said. "Har-Ber has some good players, I've gotta give them some credit. At this point in the season, you take wins anyway you can get them. At times, it was like Austin and Hayden were out there playing pitch and catch.

"They know each other like the back of their hands. But we know we've got to be better next week because we can't get in a shooting match with Conway. We've got to tackle better than what we did [Friday]."