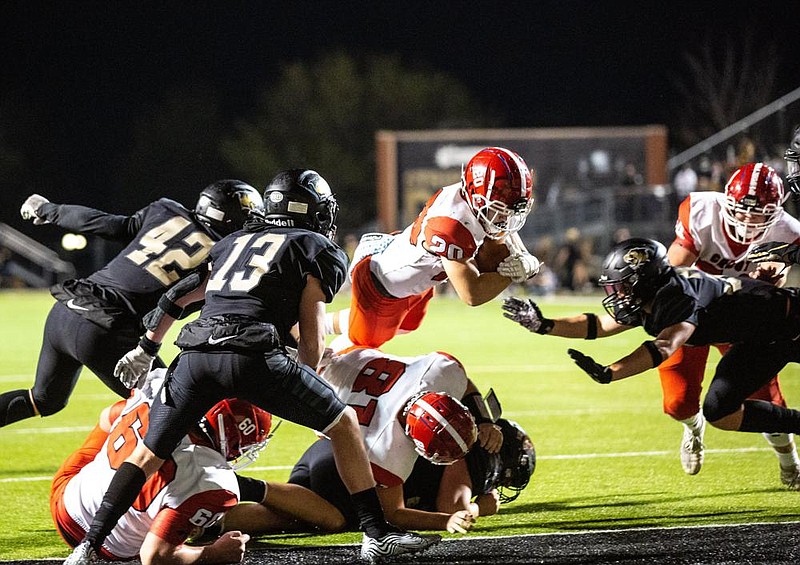 Cabot’s Jacob Parks (center) dives into the end zone for a touchdown during the third quarter against Bentonville during Friday night’s Class 7A playoff game in Bentonville. Article, Page 5C. More photos available at arkansasonline.com/1121cabotbville. (Special to the NWA Democrat-Gazette/David Beach)

The Panthers rallied with a pair of fourth-quarter touchdowns, then forced a fumble inside their own 5-yard line with under a minute left to stun Bentonville 38-34 Friday night in a Class 7A playoff quarterfinal at Tiger Stadium.

Cabot (8-3) advances to take on North Little Rock next week in an all-7A-Central semifinal party.

"And our kids just kept playing."

Bentonville (10-1), the No. 1 seed from the 7A-West, took the opening possession of the second half and drove 80 yards in nine plays to take a 34-17 lead with 7:49 left in the third quarter. The drive was keyed by an 8-yard run on third down by Bentonville sophomore Josh Ficklin, who was hit several times in the backfield but escaped for the first down to keep the drive alive, then capped the march with a short touchdown run.

Cabot answered with a scoring drive of its own, a 14-play march. Quarterback Tyler Gee was 4-of-6 passing on the drive including three straight completions of 19, 14 and 14 yards to set up Jacob Parks' short touchdown run with 2:06, cutting Bentonville's lead to 34-24.

"That was huge," Reed said of the third-quarter drive. "We were deflated. Right before the half, they scored. We had it cut to four (21-17) and they scored right before half (to go up 27-17), and that was deflating. We were behind all night. Then some time in the fourth quarter, I looked up and said, 'Wow, we're only down three.' "

Bentonville had a costly turnover after the Cabot touchdown that pulled the Panthers within 34-24 when quarterback Andrew Edwards was stripped of the ball after a nice gain and Chase Gibson recovered at the Cabot 25.

Cabot pulled within 34-31 early in the fourth quarter when Gee shredded the Bentonville secondary on six consecutive completions, moving the Panthers from their 26 for a score as Gee hit Ashton Shurley for 18 yards with 8:35 left in the game. Gee had strikes of 10, 5, 18, 6, 18 and the final 18 in succession.

Then after Cabot's defense came up with a stop, the Panthers got the ball back with 5:08 left at their own 11. The Panthers quickly hit Bentonville with a 54-yard pass from Gee to Kyler Carmack to the Tigers' 36, and from there Gee hit three more completions, the last a 13-yarder to Carmack for the go-ahead score with 3:36 left.

"I thought our quarterback was awesome tonight," Reed said. "He was great with the ball. We threw it all night. Our wide receivers and our offensive line played great."

Bentonville took over at its own 20 with more than three minutes left, and the Tigers moved downfield, although they had to overcome a fourth and 8 with Edwards hitting Cooper Smith on an 11-yard pass to keep the drive going. Edwards hit Smith again for 17 yards, then Ficklin had runs of 14, 10 and 9 yards as Bentonville moves inside the Cabot 10 with under a minute left. Ficklin finished with a career-high 204 yards on 26 carries for the Tigers.

Edwards got to the 2 on a 6-yard keeper, but Cabot linebacker Jared Whitman forced a Ficklin fumble and the Panthers recovered to end Bentonville's drive and its season.

"Our defensive lineman Eric Masterson was yelling at everybody to just do whatever it takes to stop them," Whitman said. "And I saw him cut up the field. I wrapped him up and somebody came up and hit him and I saw the ball, so I just pulled his arms as hard as I could."

Bentonville Coach Jody Grant said turnovers were the difference in the game.

"I felt like we would go down and score," Grant said of the late drive. "That is uncharacteristic of us. We don't turn the ball over much, and we did tonight and that's ultimately what cost us the game. It's like what I told them at halftime, the team that makes the fewest mistakes will win the game and they got us in that category." 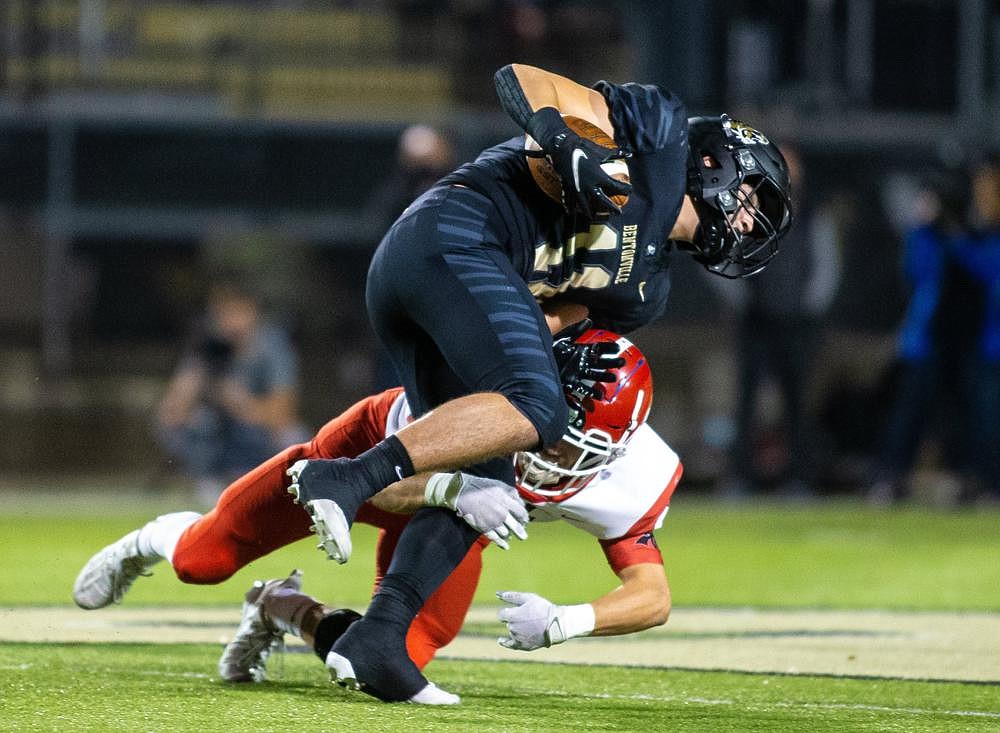 Bentonville’s Cade Foster (11) is taken down by Cabot’s Jaiden Ryals during Friday’s Class 7A playoff quarterfinal at Tiger Stadium in Bentonville. Cabot won 38-34 to advance to a semifinal against North Little Rock. More photos at arkansasonline.com/1121cabotbville/. (Special to NWA Democrat-Gazette/David Beach)