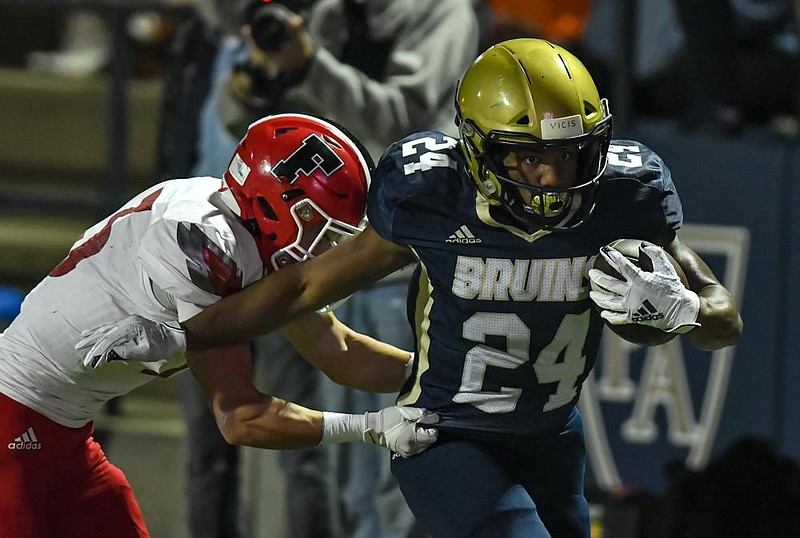 Pulaski Academy running back Caleb Nichols (24) runs away from Farmington defensive back Decory Thomas during the Bruins’ 51-21 victory over the Cardinals on Friday at Joe B. Hatcher Stadium in Little Rock. More photos at arkansasonline.com/1121farmpa/. (Special to the Democrat-Gazette/Jimmy Jones)

The break didn't bother the Bruins.

It was the Bruins' first game since Oct. 30 at Beebe before they had their regular-season finale against Jacksonville on Nov. 6 cancelled because of Jacksonville's covid-19 situation. They were off last week since they were one of four conference champions to not have to play in the play-in round.

The defending Class 5A state champion Bruins (10-0) will host Magnolia in the quarterfinals Friday night.

Farmington (5-6) was coming off a victory at Valley View in last week's play-in game.

Pulaski Academy led 16-0 three minutes into Friday's game thanks to an onside kick that led to their second touchdown after a touchdown on the game's opening drive.

"Our guys did what we wanted them to do, get off to a really quick start," Pulaski Academy Coach Kevin Kelley said. "Joe [Himon] hit a quick one up the middle. Vaughn Seelicke kicked a great on-side kick. Boom, boom. Now, all of a sudden, their momentum is all gone from their playoff win. We settled in.

"Psychologically, it was a huge deal."

"They're good enough as it is without giving them free possessions," Adams said. "We did and it hurt us."

Pulaski Academy's starters played a half before giving way to the backups in the second half.

Fiser completed 13 of 15 passes for 146 yards with 3 touchdowns and no interceptions.

Nolan Buffett went 4-of-5 passing for 85 yards with a touchdown and an interception.

Joe Himon rushed for 157 yards and 2 touchdowns on 7 carries while catching 2 passes for 15 yards and another score.

Cooper White led the Bruins' receivers with 4 catches for 99 yards and 3 touchdowns. Jalyn Witcher had 6 receptions for 62 yards and a touchdown.

Then, Vaughn Seelicke's onside kick for the Bruins was recovered by teammate Zach Horsey at the Farmington 48. Four plays later, Fiser found Himon for a 9-yard touchdown and Caleb Nichols' two-point conversion run made it 16-0 with 9:42 left in the first quarter.

The Bruins made it 23-0 with 7:47 left in the first quarter on Bruffett's 63-yard touchdown pass to White.

Pulaski Academy recovered its second onside kick of the quarter, this one by Theo Turriff. The Bruins extended their lead to 30-0 with 5:19 remaining in the first quarter on Fiser's 2-yard touchdown pass to White.

Simon scored from 37 yards out and the Bruins stretched their lead to 37-0 with 9:28 left in the second quarter.

With 2:47 left in the second quarter, Pulaski Academy went up 44-0 as Fiser found Witcher for a 14-yard touchdown.

The Bruins outgained the Cardinals 470-48 in the first half.

Christian Rose had a 4-yard touchdown run in the third quarter for the Bruins' only scoring play of the second half.

Tate Sutton threw touchdown passes of 60 yards to Avery Benton and 26 yards to Chase Brown in the second half. Caden Elsik had a 5-yard touchdown run for the Cardinals. 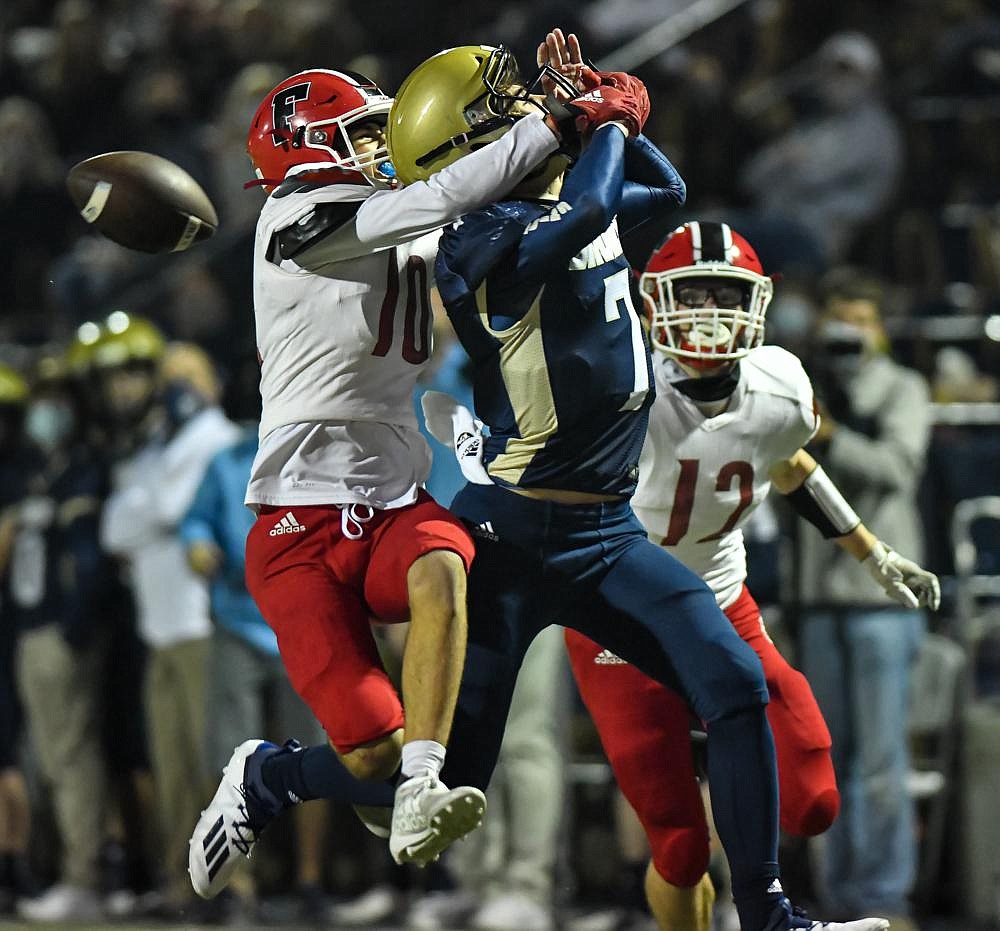