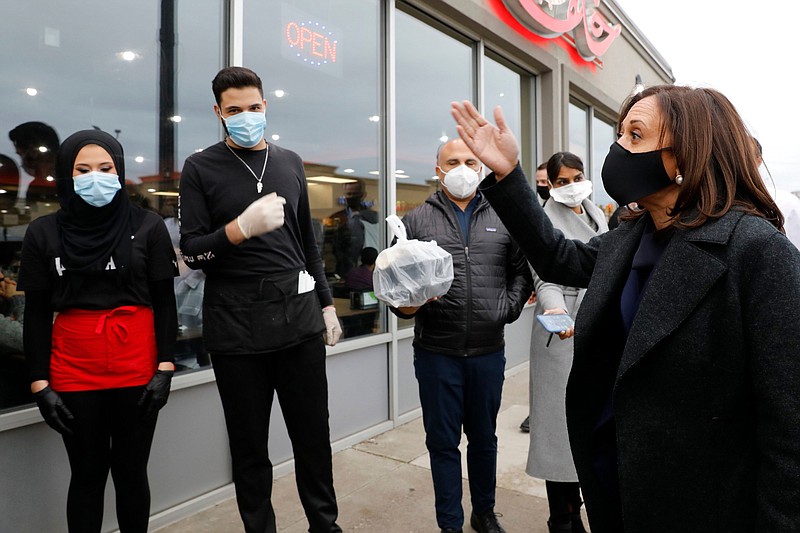 Sen. Kamala Harris, D-Calif., then the Democratic vice presidential nominee, speaks with restaurant employees after making a stop to pick up food at Khalaf Grill on Oct. 25 in Dearborn, Mich. (Jeff Kowalsky/AFP via Getty Images/TNS)

LOS ANGELES -- In the lead-up to the midterm election two years ago, Sara Deen noticed that many fellow Muslims in her South Bay community weren't voters. Some didn't understand the process. More lacked faith that their voice would matter, or had trouble navigating a ballot.

She decided to prepare a voter guide and hand it out to friends and members of her mosque during Friday prayers. This year, she's seen an increase in engagement from Muslim voters -- friends and acquaintances alike. They've asked for her help explaining state propositions, pored over her recommendations and debated their merits over WhatsApp and Zoom.

"I love it, and it means people are coming into their voice in my community," said Deen, a Rancho Palos Verdes, Calif., resident. "But what's been disappointing is how often it feels like other politicians want to co-opt our voice, but are not super interested in what we have to say."

In an election year defined by the coronavirus pandemic, calls for social justice and economic uncertainty, a record number of Muslims mailed in their ballots and headed to the polls, continuing a surge in voter registration and political engagement seen after President Donald Trump took office in 2016, according to Emgage, a national get-out-the-vote group that focuses on Muslims. Emgage Action, an arm of Emgage, endorsed and supported President-elect Joe Biden, who got 306 electoral votes to Trump's 232 as of Tuesday.

After their newfound voices resonated loudly in battleground states like Michigan and Pennsylvania, community members say, Muslim voters want more than just a seat at the table from Biden and his administration. They, like other minority communities, want to be part of the decisions that are being made at a national level, not merely relegated to community town halls with campaign surrogates or visits from candidates in even-numbered years, when their presence could help tip close elections.

Muslim organizers say that voters have often felt ignored by presidential candidates on both sides of the aisle, with the exception of Sen. Bernie Sanders' two presidential campaigns. They expect thoughtful engagement on key issues and inclusion from the next administration, including considering Muslims for Cabinet- and upper-level positions.

Many were encouraged when Biden, as the Democratic nominee, engaged with voters as part of Emgage's "Million Muslim Votes" plan, pledged to end the Trump administration's travel ban on several Muslim-majority nations and promised to fill the position of Muslim American liaison in the White House Office of Public Engagement.

"The idea is that Muslims will be included in a Biden-Harris administration," Deen, 41, said. "I am somewhere between cautiously optimistic and doubtful."

Deen would like to see Muslims in the next administration transcend what she calls "the first level of inclusion" that involves minorities who won't "shake the status quo," she said. The community organizer hopes that "our voices and our opinions are given equal weight and equal consideration."

"Equal agency in driving policy in this country -- that's what I would like to see," she said. "But I don't know if we are there yet."

This year, 110 Muslim candidates were on general-election ballots across 24 states and the District of Columbia, according to an analysis from the Muslim organizations Jetpac, the Council on American-Islamic Relations and MPower Change. All four members of the "Squad," the group of progressive female U.S. House members who are outspoken Trump adversaries, were re-elected. Two -- Rep. Rashida Tlaib of Michigan and Ilhan Omar of Minnesota -- are Muslim.

"Increasing our political representation is a critical part of defeating the violent rise of Islamophobia here and around the world because it forces elected officials and the media to include our perspective in the narrative on health care, the economy, criminal-legal system and every other issue [affecting] American life," said Mohammed Missouri, executive director of Jetpac.

For years, Muslim voters have watched as Trump campaigned across the country, declaring that "Islam hates us" and calling for a "total and complete shutdown of Muslims entering the United States." His administration passed a travel ban on Muslim-majority nations in 2017 and has repeatedly cut the cap for refugee admissions at a time when many Middle Eastern refugees are seeking U.S. asylum.

"Now, they expect some sort of a voice, some sort of representation, when it comes to not just decisions with regards to where Muslims [live] but in terms of broader national policy as well," he said.

Rim Manaa would like to see Biden address discrimination and harassment against Muslims across the country.

The 53-year-old software engineer, who lives in Sierra Madre, Calif., first began working for get-out-the-vote campaigns when she supported Barack Obama's re-election. This year, she organized for Emgage and other civic engagement campaigns, calling potential voters in Nevada and Arizona and helping them register to vote.

"All I want is respect for me and my family," Manaa said. "My daughter is in college. I want people to respect her. I don't want people to attack her because she is Muslim or her mom wears a headscarf."

The Muslim community also would like to see the Biden administration change refugee limits to allow more people into the country after the U.S. reached a historic low under Trump, said Hussam Ayloush, executive director of the council's Greater Los Angeles office -- something that he hopes Muslim Americans themselves will be involved with as part of Biden's team.

"We are definitely expecting a presence at a more senior level, and more serious engagement," he said. "We don't just want to be updated. We hope that experts in our community will be included in these decisions before they happen."

In addition to revoking the travel ban, he wants Biden to deliver on promises the campaign made in community meetings to end "the unfair linking" of Muslims with national security concerns through federal programs ostensibly aimed at "countering violent extremism," Ayloush said.

Under Trump, 85% of the "countering violent extremism" grants awarded by the Dept. of Homeland Security explicitly targeted Muslims and other minority groups, including immigrants and refugees, more than under the Obama administration, according to an analysis by the Brennan Center for Justice, a nonpartisan policy institute at the New York University School of Law.

"We are hopeful that this injustice will be over," Ayloush said. "It should never be linked to any one specific community."

After listening to a khutbah during Friday prayers, Fareed Farukhi said that he doesn't want "token appreciation" from Biden. Farukhi, who lives in Orange County, said Muslim voters made a difference in the election in states including Michigan and Nevada.

They deserve to be involved in all aspects of the government, be it in health care policy, science or other parts of the administration, the 64-year-old said.

"We have earned our stripes," he said. "You cannot say, 'I got your votes, thank you very much' and then make some token appointments."