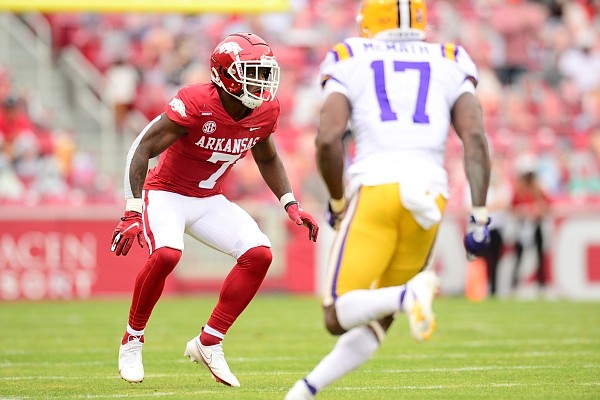 Arkansas defensive back Joe Foucha reads a play during a game against LSU on Nov. 21, 2020, in Fayetteville. - Photo by Walt Beazley, Arkansas Razorbacks

Down several players because of covid-19 issues, including the majority of the defensive line rotation, the University of Arkansas held a 24-20 lead late in the game before falling to LSU 27-24 at Reynolds Razorback Stadium on Saturday. The victory allows the Tigers to retain the Golden Boot Trophy.

Arkansas kicker A.J. Reed's 44-yard field goal with 1:30 remaining came up short to allow the Tigers to seal the victory.

LSU (3-3) regained the lead on TJ Finley's 13-yard TD pass to Jaray Jenkins with 3:59 left. The drive was aided by a controversial targeting penalty on safety Jalen Catalon, who was ejected from the game after registering a game-high 16 tackles.

DT Jonathan Marshall was the only starter on the Hogs' defensive line to play because of covid-19 issues. Senior RB Rakeem Boyd also missed the game.

The Razorbacks went 3 and out, with DE Ali Gaye breaking up Feleipe Franks’ third-down pass for Trelon Smith. LSU converted 3rd and 4 on TJ Finley’s 5-yard swing pass to John Emery Jr., then had to punt. Mike Woods caught an 11-yard pass to move the sticks, then Franks’ slant on 3rd and 7 was well defended by Cordale Flott to force a punt. Jaray Jenkins caught an 18-yard pass to trigger LSU’s 51-yard drive. Terrace Marshall broke a tackle for a 20-yard reception to convert 3rd and 4. Cade York booted a 49-yard FG. The Razorbacks went 3 and out, with Franks overthrowing Smith on an open swing pass. Marshall made a 5-yard catch on 3rd and 6 and Zach Von Rosenberg punted 58 yards to the Hogs’ 8. Blake Kern caught a 13-yard play-action shot over the middle to start the sequence. Treylon Burks caught a 9-yard slant and Smith ran for 5 yards. Franks found Burks running free deep right and Burks broke 2 tackles en route to a 65-yard touchdown. Tyrion Davis-Price had 4 straight runs, the last a 22-yarder, to net 33 yards. Jalen Catalon had a 5-yard tackle for loss on a pitch play, then tackled scrambling Finley for a 6-yard gain on 3rd and 9.

The Tigers converted 4th and 3 on TJ Finley’s shot to Arik Gilbert for 5 yards. CB Hudson Clark slipped on a hitch and go and Racey McMath caught an unguarded 30-yard TD. Trelon Smith slipped at the line of scrimmage on 3rd and 5 as the Razorbacks went 3 and out. Kayshon Boutte’s 12-yard catch opened LSU’s series. John Emery Jr. fumbled but the officials ruled no clear recovery and the Tigers kept possession. Boutte converted 3rd and 4 with a 4-yard hook. Finley converted 4th and 1 with a sneak to the Hogs’ 49. Terrace Mathis caught a 20-yard strike, but Montaric Brown forced a fumble and Myles Slusher recovered. LSU corner Eli Ricks was ejected for targeting on a play with offsetting penalties. Franks was sacked on third down. Greg Brooks Jr. stopped Chris Curry short on 3rd and 3. Jabril Cox picked off Franks’ play-action throw and returned it 36 yards to the 1 where Tyrion Davis-Price scored. Mike Woods beat CB Jay Ward for a 50-yard catch. Ward committed pass interference on the next play, then Franks scored on a 10-yard keeper. LSU kept it for 14 plays and the final 3:44 of the half, scoring on Cade York’s 24-yard FG. The key play was Gilbert’s 12-yard catch and 3rd and 10 to the Arkansas 27.

TJ Finley’s 6-yard slant to Terrace Marshall converted 3rd and 5. LSU drew a delay of game on 4th and 2 before Zach Von Rosenberg punted 52 yards to the 9. After a 1-yard loss, Feleipe Franks ran for 10. LSU’s LB Andre Anthony stuffed Trelon Smith for no gain on 3rd and 1. The Razorbacks had their offense on the field on 4th and 1 but drew a false start. Reid Bauer punted 58 yards and the Tigers were flagged for holding, back to their 27. The Tigers kept the ball for 12 plays and 5:49, and converted a pair of third and shorts before Finley found Jaray Jenkins for 12 yards on 3rd and 8 to the Arkansas 36. A holding call pushed the Tigers back and they punted to the Hogs’ 4. Franks found Mike Woods for 29 yards on play action. Trey Knox caught a 9-yard pass to move the chains. Woods beat Cordale Flott on a 50-yard catch and run. On 2nd and goal, Smith powered in for the score. Arik Gilbert caught a 6-yard pass, then dropped a potential big gainer. Von Rosenberg’s punt rolled to the Arkansas 8 for 61 yards. Franks dropped a deep ball perfectly into T.J. Hammonds for a 51-yard gain to the LSU 41 on the final play of the quarter.

Feleipe Franks ran for 6 yards, then T.J. Hammonds got free around left end for a 29 yard pickup to the 6. Blake Kern caught a 4-yard pass as the rain picked up in intensity. Franks slipped and fell on a keeper on 3rd down. A.J. Reed’s 22-yard FG made it 24-20. Jontre Kirklin caught a 19-yard strike from TJ Finley to the LSU 44. The Tigers reached midfield before a holding call negated a big Kirklin reception. Zach Von Rosenberg’s 48-yard punt rolled to the Hogs’ 7. Franks kept for 8 yards on first down, but slipped twice and came up short on 3rd down. Reid Bauer punted 54 yards. Kayshon Boutte caught a 14-yard strike and a targeting call on Jalen Catalon was upheld on review as the fans booed. Arik Gilbert made a 17-yard catch to convert 3rd and 9. Finley was flagged for intentional grounding at the 13. Finley had time and found Jaray Jenkins for the TD. Trelon Smith had a 12-yard catch and Burks grabbed a 15-yarder. Smith’s 7-yard catch converted 4th and 3, then Tyson Morris had a 12-yard reception. Jay Ward broke up a swing pass for Smith, then tipped A.J. Reed’s 44-yard FG try. LSU ran out the clock and boos descended as the officials left the field.