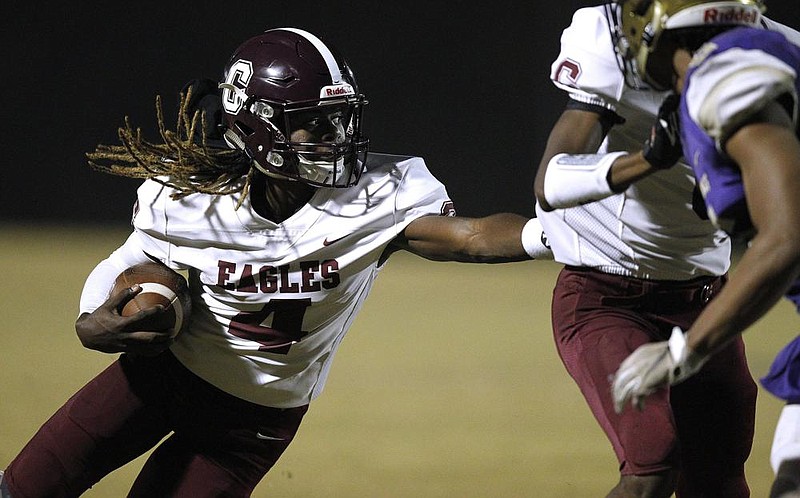 Crossett quarterback Tyrique Jones breaks behind the block of a teammate on a touchdown run during the Eagles’ victory over Central Arkansas Christian in the Class 4A playoffs Friday night in North Little Rock. More photos available at arkansasonline.com/1121crossettcac. (Arkansas Democrat-Gazette/Thomas Metthe)

Playing with a little rust has not been an issue for the Crossett Eagles this season. By now, Coach Shawn Jackson's team is used to it.

After starting slow, the Eagles (5-1) made some big plays on special teams and defense to run away from the Central Arkansas Christian Mustangs 68-36 Friday night in North Little Rock in the first round of the Class 4A playoffs.

"Our kids are first class. They are winners. They have handled this whole thing like champions. They fly high."

The Eagles, who trailed 7-0, broke from a 7-7 tie by scoring two consecutive touchdowns for a 21-7 lead, and the cushion eventually grew into a rout.

Leading the way was junior quarterback Tyrique Jackson, who accounted for all of the Eagles' first-half scores except one, which he set up with a long run. Jackson ran for four touchdowns, had a 53-yard touchdown pass to Dewayne Ashford, and his 37-yard run set up a short touchdown run by sophomore Tayshawn Paskel.

"We're fast,'' Jackson said. "We have a real good group of kids. Our offense , the whole group, is just good kids. We got people who are quick and we have a quarterback who can get them the ball. They just made some plays out there.

"You're a good coach when you've got good players."

Jackson scored on runs of 1, 23, 53 and 56 as the Eagles built a 49-28 lead. He hit Ashford in stride for the long touchdown pass. Freshman Brandon Urbina hit all seven extra points in the first half.

With Crossett ahead 42-28, the Eagles recovered an accidental onside kick when the kickoff ricocheted off an unsuspecting Mustangs' lineman and was recovered by Mason Taunton. That led to Paskel's score that made it 49-28 at the break.

The Eagles never punted and scored on every possession except for a one-play drive before the end of the first half.

Paskel added a score on a 1-yard in the third quarter, and Jones hit Jackson Moore on a 9-yard touchdown pass. Freshman Max Brooks scored the final touchdown on a short run.

Junior running back Tyler Williams did most of the damage for the Mustangs, scoring on runs of 4, 5 and 9 in the first half. Ty Bahnks scored on an 8-yard run. Nathan Kennedy scored the final CAC touchdown.