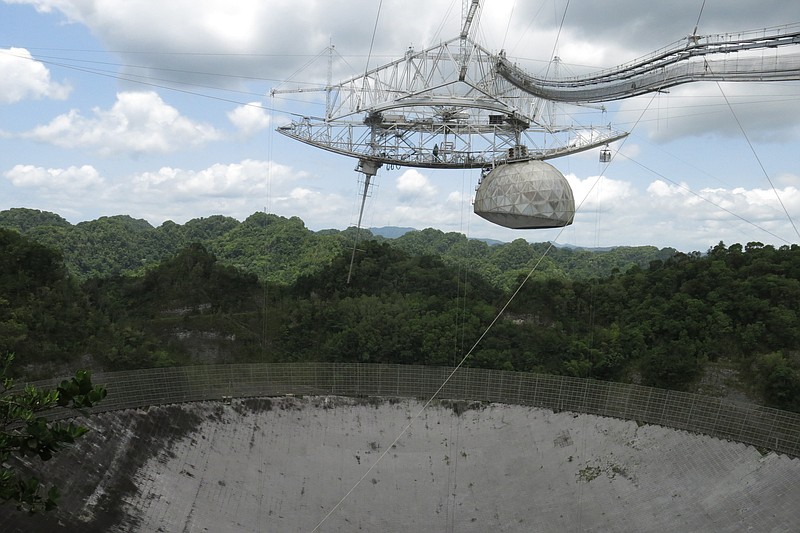 FILE - This July 13, 2016 file photo shows one of the largest single-dish radio telescopes at the Arecibo Observatory in Arecibo, Puerto Rico. Giant, aging cables that support the radio telescopes are slowly unraveling in this U.S. territory, threatening scientific projects that researchers say can’t be done elsewhere on the planet. (AP Photo/Danica Coto, File)

SAN JUAN, Puerto Rico -- The National Science Foundation announced Thursday that it will close the huge telescope at the renowned Arecibo Observatory in Puerto Rico in a blow to scientists worldwide who depend on it to search for planets, asteroids and extraterrestrial life.

The independent, federally funded agency said it's too dangerous to keep operating the single dish radio telescope -- one of the world's largest -- given the significant damage it recently sustained. An auxiliary cable broke in August and tore a 100-foot hole in the reflector dish and damaged the dome above it. Then on Nov. 6, one of the telescope's main steel cables snapped, leading officials to warn that the entire structure could collapse.

Science Foundation officials noted that even if crews were to repair all the damage, engineers found that the structure would still be unstable in the long term.

"This decision is not an easy one for [the National Science Foundation] to make, but the safety of people is our number one priority," said Sean Jones, the agency's assistant director for the mathematical and physical sciences directorate. "We understand how much Arecibo means to this community and to Puerto Rico."

He said the goal was to preserve the telescope without placing people at risk, but, "we have found no path forward to allow us to do so safely."

The telescope was built in the 1960s with money from the Defense Department during a push to develop anti-ballistic missile defenses. In its 57 years of operation, it endured hurricanes, endless humidity and a recent string of strong earthquakes.

The telescope boasts a 1,000-foot-wide dish featured in the Jodie Foster film "Contact" and the James Bond movie "GoldenEye." Scientists worldwide have used the dish along with the 900-ton platform hanging 450 feet above it to track asteroids on a path to Earth, conduct research that led to a Nobel Prize and determine if a planet is potentially habitable.

In recent years, the facility has been managed by the University of Central Florida.

Alex Wolszczan, a Polish-born astronomer and professor at Pennsylvania State University who helped discover the first extrasolar and pulsar planets, said that while the news wasn't surprising, it was disappointing. He worked at the telescope in the 1980s and early 1990s.

"I was hoping against hope that they would come up with some kind of solution to keep it open," he said. "For a person who has had a lot of his scientific life associated with that telescope, this is a rather interesting and sadly emotional moment."

The announcement saddened many beyond the scientific world as well, with the hashtag #WhatAreciboMeansToMe popping up on Twitter along with pictures of people working, visiting and even getting married or celebrating a birthday at the telescope.

Ralph Gaume, director of the National Science Foundation's Astronomical Sciences Division, stressed that the decision has nothing to do with the observatory's capabilities.

"The telescope is currently at serious risk of unexpected, uncontrolled collapse," he said. "Even attempts at stabilization or testing the cables could result in accelerating the catastrophic failure."

Officials suspect a potential manufacturing error is to blame for the auxiliary cable that snapped after a socket holding it failed, but say they are surprised that a main cable broke about three months later given that it was supporting only about 60% of its capacity. Engineers had assessed the situation after the first cable broke, noting that about 12 of the roughly 160 wires of the second cable that eventually broke had already snapped, said Ashley Zauderer, program officer for Arecibo Observatory at the National Science Foundation.

"It was identified as an issue that needed to be addressed, but it wasn't seen as an immediate threat," she said.

She and other agency officials said that all standard maintenance procedures had been followed.

The agency said it intends to restore operations at the observatory's remaining assets including its two LIDAR facilities, one of which is on the nearby island of Culebra. Those are used for upper atmospheric and ionospheric research. 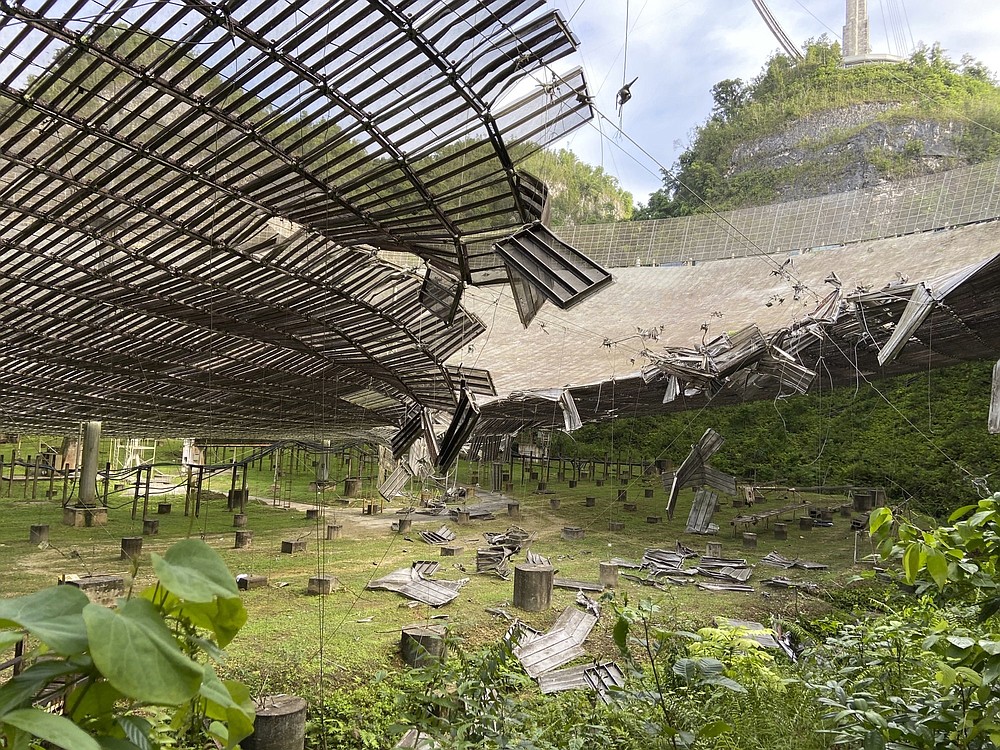 FILE - In this Tuesday, Aug. 11, 2020 file photo, provided by the Arecibo Observatory, shows the damage done by a broken cable that supported a metal platform, creating a 100-foot (30-meter) gash to the radio telescope's reflector dish in Arecibo, Puerto Rico. Giant, aging cables that support the radio telescopes are slowly unraveling in this U.S. territory, threatening scientific projects that researchers say can’t be done elsewhere on the planet. (Arecibo Observatory via AP)