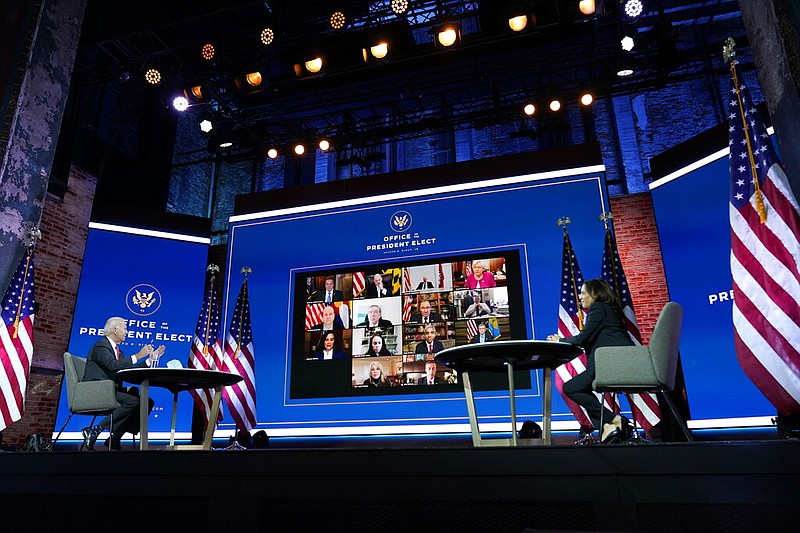 "I was speaking as a Southern red-state governor," Hutchinson, who also serves as vice chairman of the National Governors Association, said in an interview afterward.

"We are making decisions that are different in different states, and it's based upon the uniqueness that we have," he said. "As he makes decisions for the future, he's got to understand that diversity."

During the virtual meeting, the governors also discussed covid-19's effect on the economy.

Hutchinson said he told Biden that states are "making decisions as to restrictions based upon the data we have and that we don't want to have to put additional restrictions [in place] unless they make a difference."

The Arkansan was one of five Republican governors who participated in Thursday's videoconference with Biden and Vice President-elect Kamala Harris. Five Democrats were also invited.

"It was very helpful," Hutchinson said.

In addition to his running mate, Biden was joined online by members of his coronavirus task force, including former Surgeon General Vivek Murthy, and former Food and Drug Administration commissioner David Kessler.

While Republicans on Capitol Hill have been reluctant to recognize Biden as the winner of the Nov. 3 presidential election, Hutchinson said Thursday that he "fully expect[s]" Biden to become the nation's 46th president on Jan. 20.

"He ran a good race, and right now he's the presumptive winner of it. And so I congratulated him," Hutchinson said.

The governors want to help members of Biden's coronavirus task force so that "they're ready to go in January, and we won't have any dropped balls as we're fighting the virus as it goes into next year," he said.

"The most important thing is that there is a smooth transition," Hutchinson said. "Whenever we look at the complexities of vaccine distribution, about Operation Warp Speed, they need to be brought up to date as soon as possible on the current plans so they don't develop plans that don't fit in well with what is already going [on]."

During a telephone interview Thursday, Hutchinson did not refer to Biden as the president-elect, and he acknowledged that Trump has legal remedies he can still pursue.

"History says that they're not going to make any difference in the final outcome, but it is appropriate for President Trump to reserve those appeals and to be able to pursue those because that will help Americans have confidence and the Trump supporters have confidence in what's happened," Hutchinson said.

Trump "can pursue those remedies at the same time paving the way for exchange of information with Biden's transition team," he added.

"In Arkansas, I said that we have a balanced budget, we've got a surplus because we managed it well, but we also recognize that other states have gotten hit harder," he said. "We do understand that we need a new stimulus package, and I hope that can be done, but that's something that's up to the Congress right now."

After Thursday's videoconference, Biden said the Trump administration isn't yet providing his transition team with access to information about Operation Warp Speed.

Thursday's meeting with the governors, on the other hand, had been productive, he said.

"Each of the governors emphasized that we might be Democrats and Republicans -- but we're all Americans first," he said. "Governors made clear that beating covid-19 is going to require all of us working together as one country."