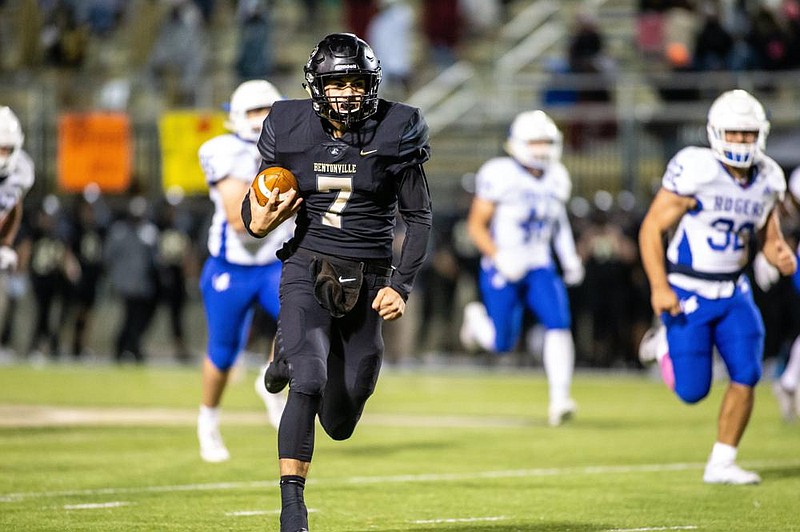 Quarterback Andrew Edwards and the Bentonville Tigers have won the past three meetings against the Cabot Panthers, including a 31-6 victory in a 2017 Class 7A state quarterfinal game. (NWA Democrat-Gazette file photo)

I covered a football playoff game 20 years ago this month when Cabot connected on an 11-yard touchdown pass in overtime to beat Springdale 12-9 in the final game of coach Jarrell Williams' long and successful career with the Bulldogs.

If Cabot completed another pass on that cold, miserable night, I don't remember it.

Cabot will look vastly different tonight when the Panthers face Bentonville High in the second round of the Class 7A state playoffs at Tiger Stadium. Cabot no longer relies on the Dead-T offense that former coach Mike Malham used for decades in building the Panthers into a statewide power. But that run-run-run offense with a stacked backfield ended two years ago when Malham retired and was replaced by Scott Reed, who added a passing game to the Panthers' attack.

Oh, Cabot (7-3) can still run the ball. Rogers High found that out last week when Cabot rolled up 388 yards on the ground during a 48-14 victory over the Mounties. But Bentonville has a defense far superior to Rogers and most high school teams in Arkansas.

Bentonville (10-0) received a first-round bye after overwhelming its seven conference opponents 365-83. If there's any concern, it's that Bentonville's momentum may have slowed after whipping rival Bentonville West two weeks ago.

More likely, Bentonville coach Jody Grant will have his team ready at the outset against a dangerous Cabot team that finished fourth in the state's toughest conference. Cabot's only three losses were to No. 1 Bryant (42-14), No. 3 North LR (48-31) and No. 4 Conway (52-49).

Bentonville will have to defend the whole field against Cabot and senior quarterback Tyler Gee, who has thrown for 2,511 yards and 27 touchdowns this season. The Tigers will counter on offense with quarterback Andrew Edwards and Chas Nimrod, who caught two touchdown passes and returned a kickoff 97 yards for a touchdown in a 44-7 win over Bentonville West. Bentonville's defense is led by all-state linebackers Cole Joyce and Keegan Stinespring, who move in the backfield in the Tigers "Barge" formation near the goal-line.

Cabot's only bad loss is to No. 1 Bryant, and there's certainly no shame in that. But Bentonville wants its own shot at Bryant and Cabot won't stand in the way of the Tigers advancing.

Other selections involving teams from Northwest Arkansas. Some scheduled games may be canceled by tonight because of covid-19 concerns. (selections are capitalized).

Rick Fires can be reached at [email protected] or on Twitter @NWARick.