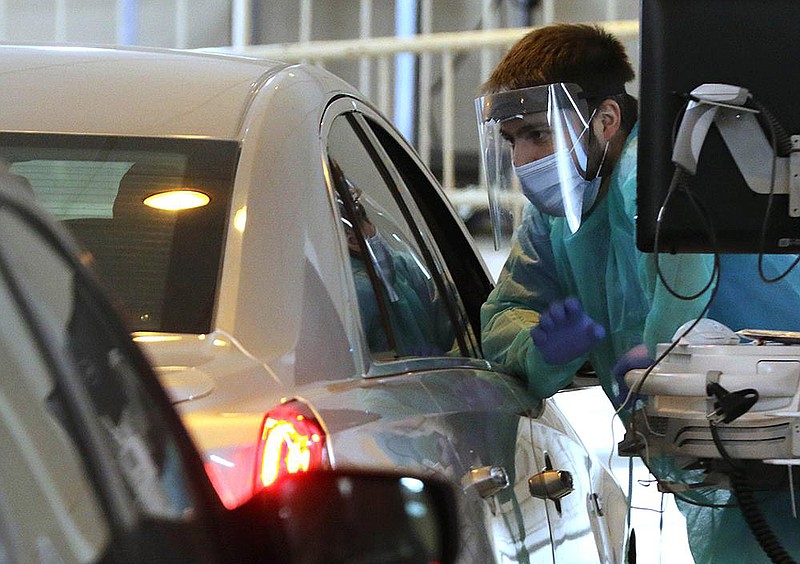 The number of covid-19 patients in intensive care units, as well as the tally of active cases and the number of coronavirus patients on ventilators, hit all-time highs Thursday after 2,238 new cases were reported, according to data from the Arkansas Department of Health.

The numbers were reported shortly after Gov. Asa Hutchinson announced that Arkansas businesses licensed to sell and allow consumption of alcohol on their premises must now close by 11 p.m.

"I will be addressing the high number of new cases in a Friday news conference," Hutchinson said. "Today we implemented the first recommendation of the covid-19 Winter Task Force, and I will address hospital capacity tomorrow."

The news conference is scheduled for 2:30 p.m. today and will be live-streamed at: https://www.youtube.com/c/GovernorAsaHutchinson/live.

As of Thursday, there were 361 patients in intensive care units as the number of available beds in the critical care units dipped to a low of 68 -- even as hospitals are creating and staffing additional intensive care beds around the state.

The number of active covid-19 cases in the state jumped by 421 to 16,998, the highest tally since the pandemic was confirmed as reaching Arkansas in March.

There were 146 patients on ventilators, up by three from the previous day, also reaching a new daily high.

The number of new cases reported Thursday -- 2,238 -- is the second-highest increase in the state since the pandemic began, and only the second time that the state has added more than 2,000 cases in one day. The record was set Oct. 13, with 2,312 new coronavirus cases.

Covid-19 hospitalizations dropped by two to 899, a day after setting a record at 901.

State Epidemiologist Jennifer Dillaha said the increase in patients in ICUs and on ventilators is "alarming."

"We need to take steps to reverse this trend on multiple fronts. We are working with the hospitals on a strategy that will maximize capacity," Dillaha said. "We also need Arkansans to follow the guidelines to prevent the continued spread of covid-19 to reduce hospital admission. If our cases continue to rise, our hospitalizations will also increase. It's critical that we reduce our cases now to relieve the pressure on our health care system as we head into winter."

"In an effort to reduce the spread of the virus as a result of prolonged social interaction in group settings, I am accepting the recommendation of the Winter Covid Task Force to require bars, restaurants and clubs that sell alcohol for consumption in their establishments to close at 11 p.m.," Hutchinson said. "This is a balanced approach that is limited and targeted as we work to reduce new covid cases in our state."


Any person found in violation of the directive can be deemed guilty of a misdemeanor and punished by a fine of not less than $100, nor more than $500, and/or imprisonment not exceeding one month in jail.

The new Health Department directive comes a day after hundreds of physicians in the state sent a letter to Hutchinson asking him to implement and enforce stricter covid-19 interventions.

The electronic version of the letter -- which was signed, 'The Physicians of Arkansas' -- now has nearly 350 doctor signatures, said Dr. Heather Young, a pediatric infectious disease physician.

The doctors asked that the governor enforce a universal mask mandate, close bars and gyms, limit restaurant service to takeout only and restrict all indoor gatherings to fewer than 10 people.

On Thursday, Young said Hutchinson's actions were "a step" in the right direction.

Several states and cities around the nation have announced similar restrictions this week as the virus surges.

In Ohio, patrons must leave bars and restaurants at 10 p.m. The state also instituted a statewide curfew from 10 p.m. to 5 a.m. for the next three weeks.

The state of New York set a 10 p.m. curfew for bars, restaurants and gyms statewide. Gov. Andrew Cuomo also announced a ban on gatherings of more than 10 people in private residences.

Virginia bars and restaurants cannot serve alcohol after 10 p.m. and must close by midnight.

California Gov. Gavin Newsom imposed an overnight curfew in 41 of the state's counties. Starting Saturday, all nonessential work, movement and gatherings must cease between 10 p.m. and 5 a.m.

In Los Angeles, restaurants have to shut down by 10 p.m., are not able to open indoors and are limited to half their outdoor capacity.

Of the 2,238 new cases in Arkansas, 114 were attributed to correctional facilities, and the remaining were the result of community spread.

"There continues to be high levels of community spread in counties across Arkansas. One significant driver is gatherings of people from multiple households," Dillaha said. "With the Thanksgiving holiday now only a week away, we need to actively avoid places and situations where transmission can easily occur. This means avoiding: crowds, rooms with poor ventilation, prolonged contact with others or any contact with people who do not wear masks."

Of the 2,297 deaths since the pandemic began, 51 were in correctional facilities, and 954 were in nursing homes.

The PCR tests take longer to get results, but are more accurate than the faster antigen tests.

Of the state's 9,144 hospital beds, 2,428 remain available. That number includes hundreds of psychiatric and rehabilitation beds that are not used for covid-19 care.

"Arkansans should take seriously the three W's: Wear a face covering, wash your hands and watch your distance," Dillaha said. "They also should avoid groups larger than 10 people. These steps sound simple – and they are. But they can make a tremendous difference if Arkansans follow them."

At a board meeting in Fayetteville on Thursday, University of Arkansas for Medical Sciences CEO Steppe Mette said the group is preparing for "looming, large-volume demand" because of the surging pandemic.

The number of covid-19 patients at the state's largest hospital has doubled in the past 10 days, and they "fully expect" another doubling, Mette told University of Arkansas System trustees.

The "largest vulnerability," he said, is staffing. Last weekend, 400 employees were out because of quarantines, and while all have been working hard without complaint during the pandemic, "I do worry about their resilience, their health, their emotional well-being," he said.

In remarks, Mette ran down a list of recent preparations, including reducing elective surgeries and increasing critical-care beds from 52 to 64. That could potentially go as high as 128, he said.

Personal protective equipment is well-stocked, and Arkansas Children's Hospital recently donated some adult ventilators to the hospital. With recent and anticipated shipments, UAMS has enough of the breathing machines for 100 adults, Mette said.

The Little Rock campus also has reopened a 60-bed covid-19 unit, 30 beds of which are occupied. The unit could house 120 patients with double-occupancy rooms, Mette said.

While that's not typical for the campus, "in an emergency, if we really need to do that, we are prepared to do so," he said.

UAMS also is preparing infrastructure to vaccinate employees and high-risk patients when a vaccine becomes available. Two drugmakers have released results for vaccines they're developing this month.

About $16 million from the federal Coronavirus Aid, Relief, and Economic Security Act helped, but some service volumes are slightly down from last year, and labor costs are up, she said. For example, contract labor is much more expensive as hospitals around the country compete due to pandemic staffing needs.

"It's a supply and demand problem. There's not enough people for hospitals to hire," she said.