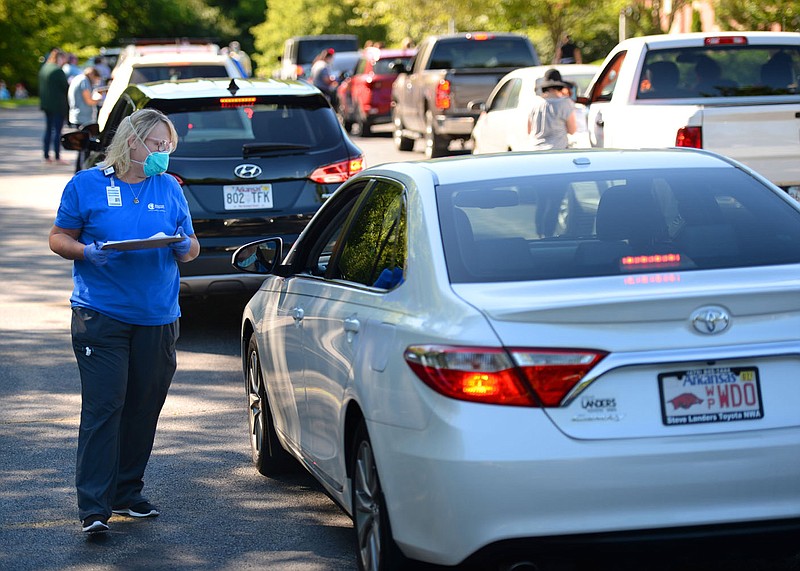 Health care workers and volunteers record information May 30 as a long line of residents wait to be tested for covid-19 at the Washington County Health Unit in Fayetteville. The city's Board of Health discussed a vaccine potentially hitting the region by the end of the year. (File photo/NWA Democrat-Gazette/Andy Shupe)

FAYETTEVILLE -- A first round of vaccinations for covid-19 could hit the region by the end of the year, the city's health board discussed Wednesday.

Washington Regional Medical Center was selected as one of five hospitals in the state to get the first shipment of vaccine from drug maker Pfizer, said Marti Sharkey, the city's public health officer who also serves on the state's covid vaccine advisory committee. The shipment could arrive by late December, but the plan is subject to change, she said.

The Arkansas Department of Health will dictate how and who gets the vaccine first, Sharkey said. Health care workers and first-responders would be first in line. From there, those in nursing homes and the elderly and high-risk in the community would come next, she said.

"The city bought a heavy-duty freezer for $11,375 to loan to Washington Regional to store the vaccine, Fire Chief Brad Hardin said. The money came out of the city's $3 million emergency fund and will be reimbursed with money from the city's general fund."

The vaccine from Pfizer requires storage at -94 degrees Fahrenheit. Washington Regional has such a freezer with limited capacity, Sharkey said. The city bought its freezer to ensure vaccinations will get under way as quickly as possible, because shipments will only come if a hospital has the capacity for storage, she said.

"It will get used. That I'm not worried about," Sharkey said.

Pfizer announced Wednesday its vaccine in development is 95% effective with no serious side effects, and the company planned to seek emergency authorization from the U.S. Food and Drug Administration.

Representatives on the city board from Washington Regional and the Washington County Health Unit said the two entities will work together to administer the vaccine. Drive-through clinics are a likely option.

Board Member Richard Taffner with the Washington County Health Unit said the state Department of Health has been orchestrating mass vaccination events for decades.

"I'm pretty confident that once we get vaccine in and we get a directive, we can get it in peoples' arms," he said.

The vaccine could arrive during a new height of pandemic activity. The seven-day rolling average of new cases in Washington County was 151 as of Wednesday, a new record, Sharkey said.

The county is averaging about 1,200 tests per day, she said. Board Member Lenny Whiteman, vice president of managed care at Washington Regional, said the hospital administered about 450 covid tests Tuesday, significantly higher than a few weeks ago.

Board Member Huda Sharaf, medical director at the University of Arkansas' Pat Walker Health Center, said the number of students seeking a test significantly increased this week. The uptick was likely because of students planning to see family for Thanksgiving, she said.

The story was updated to correct where money for the freezer would come from.