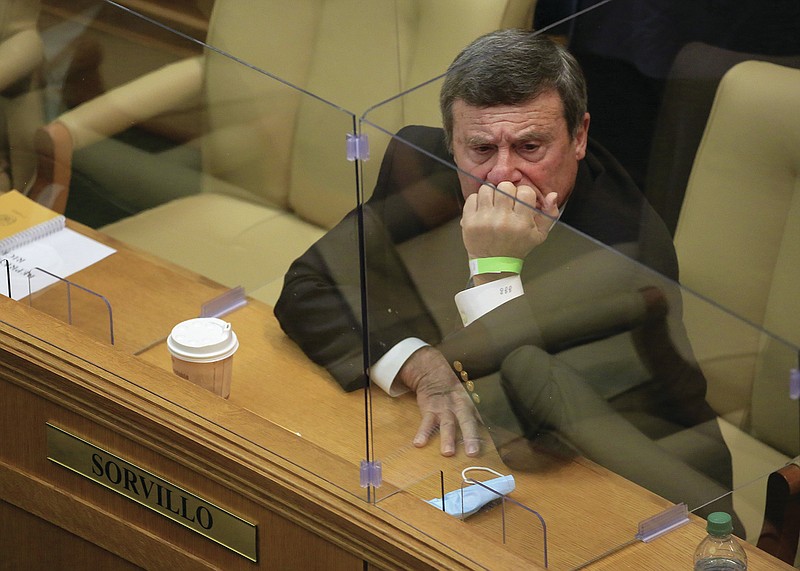 Rep. Jim Sorvillo, R-Little Rock, sits in his seat in the House chamber Friday Nov. 6, 2020 in Little Rock during a meeting of the House caucus. Committee assignments and seniority rankings in the House were put on hold because of two House races, including Sorvillo's District 32 race against Ashley Hudson, that have yet to be decided.

State Rep. Jim Sorvillo, R-Little Rock, filed a lawsuit Monday seeking to invalidate the results of his bid for reelection, saying that "irreparable" counting errors were made en route to a 24-vote lead for his Democratic opponent, Ashley Hudson.

Hudson, an attorney, led the three-term state representative from west Little Rock's House District 32 with 8,404 votes to his 8,380, according to the complete, uncertified results.

The race in House District 32 is one of two races in the county where the narrow margins between the candidates are less than the numbers of erroneously-counted ballots included in the results. Election workers mistakenly ran disqualified absentee ballots through tabulation machines.

That error affected less than one half of 1% of the 170,870 ballots cast during the Nov. 3 general election, but election workers were able to determine that 32 of those ballots came from House District 32, more than Hudson's 24-vote lead.

Sorvillo's lawsuit, filed in Pulaski County Circuit Court, asks that a judge declare the results of the election "invalid, and incapable of correction," and to order a new election.

Hudson, who was not named in the lawsuit, said Tuesday she had retained counsel to help evaluate her options.

"I'm not sure that the type of relief they're requesting is even available to them, but we'll take a look at what the best course seems to be and go from there," Hudson said.

Sorvillo did not respond to requests for comment on Tuesday.

News of the lawsuit on Monday evening caused Republican Party of Arkansas Chairman Doyle Webb to request that the Pulaski County Election Commission hold off on certifying the results of the election in House District 32.

The commission, made up of two Republicans and one Democrat, unanimously agreed to wait until today before certifying the results, allowing the courts to act before then. The commission meanwhile voted to certify the results in every other race in the county.

Democrats responded to the lawsuit -- and the commission's decision not to certify the results of the election -- by pointing to the similarly clouded result in House District 38, where state Rep. Carlton Wing, R-North Little Rock, defeated Democrat Matthew Stallings by 16 votes, while 37 disqualified ballots were included in the results.

After the results of the race were certified, Stallings said Monday he planned to concede the race to Wing.

"I don't have to like it, but I do have to accept it," Stallings said.

Democratic Party of Arkansas Chairman Michael John Gray, meanwhile, said Sorvillo's decision to challenge the results in his race based on the tabulation error left Democrats with no choice but to look at filing a similar challenge in House District 38.

"Should [Stallings] not choose to move forward, that doesn't mean lawsuits challenging that result won't move forward," Gray said. "Because [Republicans] have moved forward, we have to examine the possibility of moving forward too."

Seth Mays, a spokesman for the Republican Party of Arkansas, responded to Gray's comments by noting that neither the party nor Stalling's campaign took action to file a challenge or request a recount Monday, before the election was certified.

"We were a little surprised that Democrats didn't have their ducks in a row yesterday," Mays said.

Nonetheless, Mays asserted that the circumstances of the election weighed in favor of Sorvillo's challenge.

For one, Mays noted, that the ballots that were erroneously counted came from a batch of absentee ballots, which have tended to favor Democrats. Republican margins in both District 32 and 38 inched downward after Election Day, as more ballots were tabulated.

Mays also noted that Sorvillo's lawsuit claimed an error resulting in the delayed delivery of ballots properly printed to include the legislative race in one precinct may have impacted an unknown number of ballots.

Citing the likelihood of irreparable harm, Sorvillo and his attorneys requested on Tuesday that the court issue a temporary injunction stopping the election commission from certifying the results in House District 32.

Without an injunction, the Pulaski County Election Commission is scheduled to meet today to certify the final results in the race.