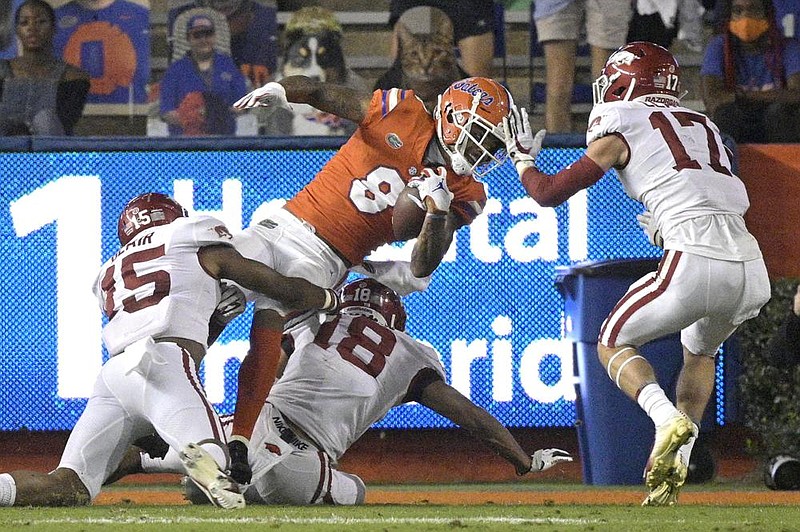 Florida wide receiver Trevon Grimes scores on a 9-yard reception among Arkansas defenders Simeon Blair (15), Myles Mason (18) and Hudson Clark (17) during the first half Saturday in Gainesville, Fla. It was one of five first-half touchdowns for Gators quarterback Kyle Trask, who threw for 356 yards and six touchdowns overall in Florida’s 63-35 victory. More photos at arkansasonline.com/1115razorbacks/ (AP/Phelan M. Ebenhack)

GAINESVILLE, Fla. -- Kyle Trask had a monster performance to add to his growing Heisman Trophy candidacy, throwing six touchdown passes as No. 6 Florida won a 63-35 shootout against the University of Arkansas and former Gator quarterback Feleipe Franks.

Florida flexed its offensive versatility with potent strikes on the ground and through the air, but when the Gators (5-1) got in scoring range the honors went to Trask, who threw five touchdown passes in the first half before a crowd of 16,116 at Ben Hill Griffin Stadium.

The Razorbacks (3-4) played without Coach Sam Pittman, who stayed home in Fayetteville after testing positive for covid-19 early in the week. Defensive coordinator Barry Odom served as interim head coach and tried different fronts, pressures and coverages against the refined Florida attack but could not slow down the Gators. They punted just once, went 9 of 12 on third-down conversions and outgained the Razorbacks 593-458 in total offense.

"Credit to Florida," Odom said. "They're really, really explosive and an experienced team, and they probably deserve every accolade and ranking that they've gotten.

The Gators improved to 10-2 against Arkansas, including 5-0 in The Swamp, and posted their highest point total against the Razorbacks.

"The wideouts did a really nice job, and Kyle Trask did a really good job distributing the ball, not getting panicky, taking what they were going to give us all night," Florida Coach Dan Mullen said. "They played a lot of dime, three down, soft dime defense.

Arkansas lost another chance to win back-to-back games for the first time since late in the 2017 season.

Pittman posted this tweet after the game: "I love this team. We will be back. Get out to the stadium Saturday if you can and watch these kids play LSU."

Trask pushed his streak to six consecutive games with four or more touchdown passes, extending his SEC record. He threw six touchdown passes for the second time this season, prompting giddy Florida fans to start a "Trask for Heisman" chant in the second half.

Franks, the Florida starter for parts of three seasons until suffering a broken ankle last year, completed 15 of 19 passes for 250 yards and 2 touchdowns with a 224.2 efficiency rating. He stayed on the field several minutes after the game getting hugs and handshakes from lots of his former teammates and coaches, including Trask. He had a conversation with Mullen and the pair shared a big hug when it was over.

Franks called the atmosphere awesome and said a minor injury to his left hand or wrist would work itself out.

"I think it came down to us executing, and then obviously Florida is a really good team," Franks said. "There's no doubt about that.

"But at the end of the day, when we get opportunities to go capitalize, we've just got to take advantage of them. That's what it boils down to, especially when you play a really good team like Florida."

Trask rated even higher with a 250.7 efficiency rating while completing 23 of 29 passes for 356 yards.

"He is really good with his eyes," Arkansas linebacker Grant Morgan said. "I know a lot of the other quarterbacks we've played, they say that we read the quarterback's eyes really well. He really looked us off a lot, even in man coverage."

Said Odom: "I'm super impressed with his patience and his ability to not only look off a receiver, but stay where he's at and stay on target. He's got a terrific arm. You can see how comfortable he is in this system. Playmakers around him and he's a heck of a quarterback, and I would suggest he's gonna win a lot of games moving forward."

Arkansas pulled within a touchdown at 21-14 on Trelon Smith's breakaway 83-yard score with 6:55 left in the first half, but the Gators closed the half with back-to-back touchdown drives.

Arkansas posted its highest scoring total of the season and got its big-play mojo cranked up with three scores of 47 yards or longer. Mike Woods hauled in touchdown passes of 47 and 82 yards for all of his game-high 129 receiving yards.

Penalties hurt the Razorbacks, one of the least-flagged teams in college football, with nine infractions for 79 yards.

Arkansas did not post a takeaway until Jalen Catalon's tipped pass interception off third-team quarterback Anthony Richardson with less than three minutes remaining. The takeaway resulted in a 12-yard touchdown run from reserve quarterback KJ Jefferson to set the final score.

Florida logged the biggest takeaway on Zachary Carter's 35-yard fumble return for a touchdown in the fourth quarter to put the Gators ahead 49-21.

Each team rushed for 208 yards. Smith ran for a career-high 118 yards on 8 carries, averaging 14.8 yards per carry. Rakeem Boyd added 56 yards and had a 12-yard touchdown as Arkansas put up three rushing touchdowns, one more than in its previous six games combined.

The Razorbacks mixed up three-man and four-man fronts and brought different blitz pressures, but they could not push the right buttons to make Trask uncomfortable in the pocket.

"We were dropping in the zone and not bringing pressure," Odom said. "They're good up front, and we weren't able to hold up long enough in our zone coverage concepts. Then when we tried to go man, we got beat."

Trask completed passes to 10 different receivers for the second consecutive game. He did not have the services of ace tight end Kyle Pitts, but didn't need him. Trevon Grimes and backup tight end Keon Zipperer had two touchdown catches each to lead the Gators.

Florida mixed the run and pass effectively against a three-man front on its first drive, a 14-play march that ended on Trask's 9-yard scoring pass to Grimes on a tunnel screen.

The Razorbacks notched the first of its big plays moments later, as Woods released beyond corner Kaiir Elam down the right sideline and Franks dropped in a 47-yard touchdown pass.

The Arkansas defense got its only stop of the first half on the next series after Florida drove to the Hogs' 16. Zach Williams pressured Trask into an incomplete throw on fourth and 1.

Arkansas could not capitalize on its only chance to gain the lead. A 15-yard screen pass to Boyd and a 15-yard low-block call on Florida moved the Razorbacks to midfield, but linebacker Ventrell Miller got a hand on Franks' fourth-and-1 pass for Woods to break it up.

Trask threw touchdown passes to Grimes and Justin Shorter on the Gators' next two possessions to make it 21-7 and push the Hogs toward the danger zone. 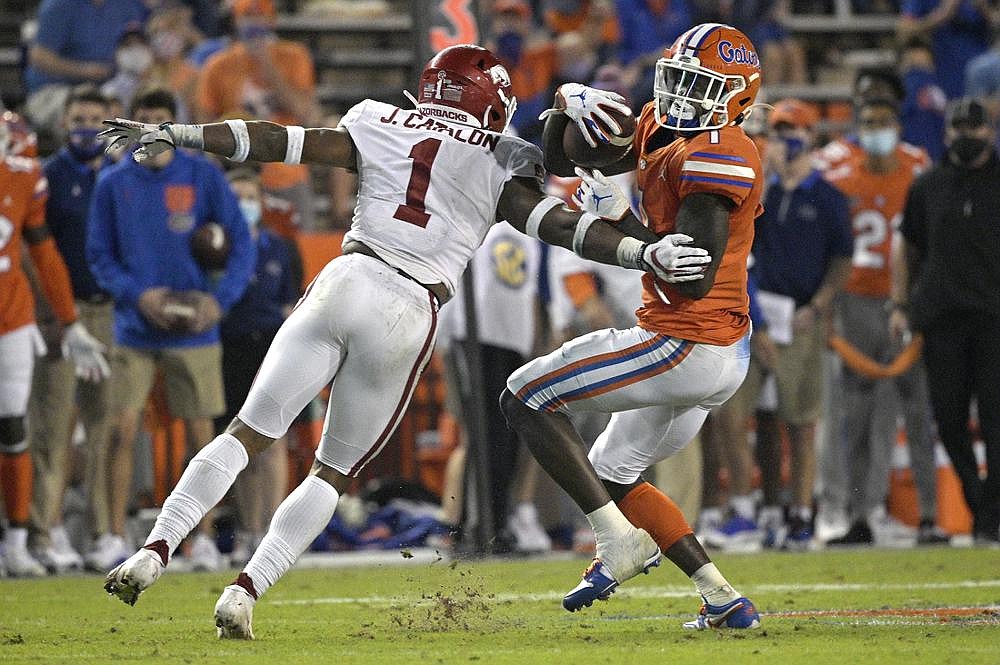