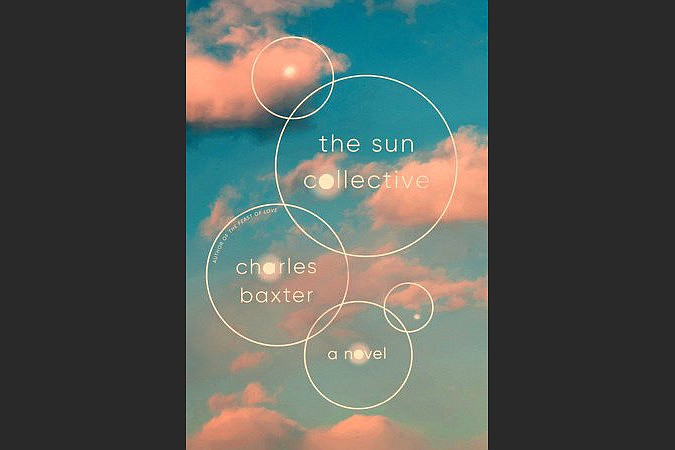 Charles Baxter had a moment about 20 years ago when it seemed that everybody (at least everybody on the internet) was reading his "Feast of Love," a playful attempt to transpose "A Midsummer Night's Dream" into a modern key. While the style and the execution are admirable, I nevertheless found it put-downable. Life is too short to allow us the chance to read even all the good books we encounter.

On the other hand, I was taken with Baxter's 2003 novel "Saul and Patsy," to the point that I went looking for it after receiving a copy of his latest novel "The Sun Collective," (Pantheon, $27.95) being published Tuesday.

I wanted to check my vague fondness for the novel against the text; unfortunately I don't have it anymore and the internet yielded only five unhelpful results. (We are long past the time when even books from big New York publishing houses can count on at least a handful of thoughtful reviews in publications aimed at a general readership. On the other hand, I didn't review it either. So "Saul and Patsy" remains only a pleasant rumor to me; maybe when the pandemic finally passes I'll spend some time in second-hand bookstores looking to retrieve my lost copy.)

There was something about "The Sun Collective," Baxter's sixth novel, reminiscent of "Saul and Patsy," and not in the superficial resemblance some characters in the present book bear to some in the older one. It's more in Baxter's reflexive humanism, or the reflexive humanism expressed by his characters.

Harold Brettigan is a retired engineer, the sort of semi-invisible good citizen we see now and then waiting on line in a hardware store or taking long walks in cemeteries around dusk. He doesn't look wounded or broken, though he is watchful for Tim, his son who has slipped from a comfortable middle-class station into the ranks of the economically unchurched — what Harold calls a "victim of capitalism."

Tim was once an actor with some reason to be hopeful, but now he's gone, driven off the grid by guilt over a girl he didn't love. Harold thinks he saw him once among the homeless, but that Tim saw him too and hustled away.

Harold is married to Alma, who he loves and who he understands is leaving him too, her mind increasingly untethered, her attention now and again wandering toward conversations with animals. She is also searching for Tim, on the streets of Minneapolis, in churches, in the great Utopia Mall — the fictional counterpart to the Mall of America, the sprawling New Jerusalem of consumerism capable of "a disorienting spatio-temporal rupture" in its visitors — and the Skyway, the matrix of enclosed pedestrian footbridges constructed to keep the Minnesota Nice from the cold. It's there Alma suffers an awful vision of a Caliban — a "human shape, someone groaning, smelling of excrement ... wearing blue jeans and a torn T-shirt or pajama top."

Harold and Alma are a credible couple; they have their own ways of conversing and digging at each other. Like twins who've created their own language, they have an understanding not entirely parseable by outsiders.

Meanwhile, 20-something Christina Lubdell finds herself adrift, working in a bank but increasingly reliant on a designer drug called Blue Telephone that causes the same sort of space-time distortion in its users as Utopia Mall does its shoppers. She aimlessly falls into a relationship with a young revolutionary who calls himself Ludlow.

Ludlow is an extreme anti-capitalist who, having divested himself of all possessions, breaks into the houses of vacationers and snowbirds to sleep. Ludlow darkly alludes to the need for "effective microviolence" to shake society from its materialistic stupor and is loosely affiliated with an amorphous community group called the Sun Collective that offers resources to the poor, which might be harboring Tim.

Meanwhile, terrible accidents that defy explanation are occurring among the city's upper-middle class, and there's a rumor of a violent cadre of upwardly mobile young men who call themselves "the Sandmen" preying on the city's homeless population. On every television, loud authoritarian President Amos Alonzo Thorkelson ("Call me 'Coach'") is shutting down the Supreme Court by calling out his New Executive Army.

After Alma suffers an episode in a city park, Christina and Ludlow helpfully intervene. In gratitude, Alma invites them to dinner, which gradually leads the Brettigans into the orbit of the Sun Collective. Tim reappears, having apparently been rescued by the group. Toward the end of the novel events begin to pile up like a chain reaction of rear-enders on a freeway, but Baxter manages to retain control of the narrative, delivering us to our destination even as firecrackers explode and shrapnel sings through the air.

It's not a criticism to say "The Sun Collective" feels like an ambitious HBO mini-series (maybe like "The Leftovers").

Still, though one can imagine the details and the casting (Richard Jenkins might make a fine Harold, I wonder about Jessica Lange for Alma), its highest and best purpose is as a novel of ideas. Some are inchoate, some might present as obvious, but taken together "The Sun Collective" is a book meant to colonize your mind.