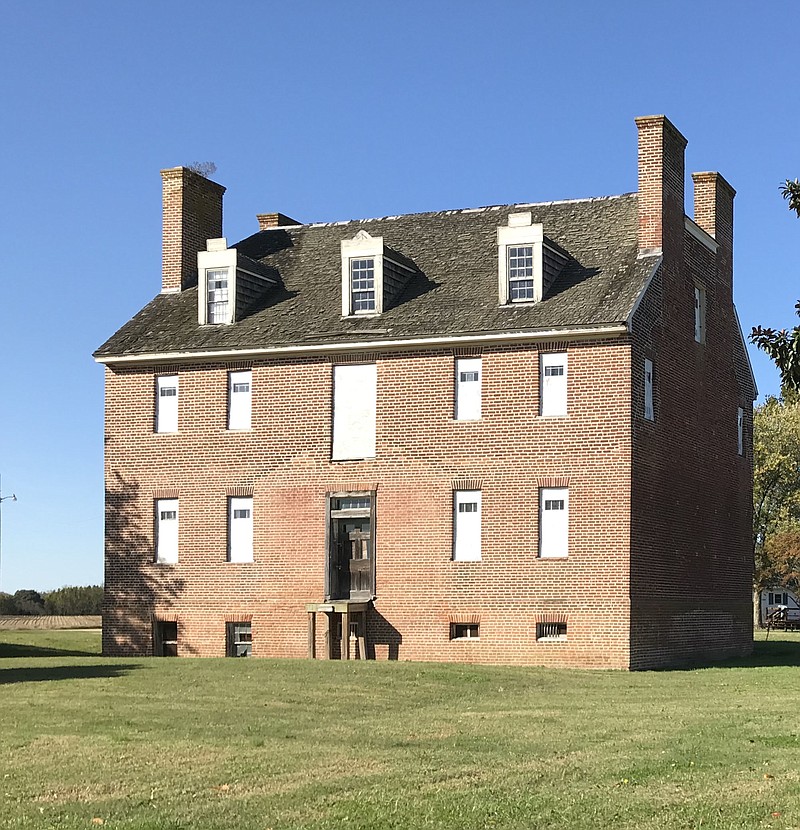 The old manor house was once part of the 700-acre Jesuit plantation at Newtowne in St. Mary’s County, Md. (The Washington Post/MICHAEL E. RUANE)

The midday chimes of St. Francis Xavier Church ring out over the old Jesuit plantation — across the fields of stubble and down toward the Potomac River and Breton Bay.

Crows call in a distant tree line, and the wind rustles the stand of dry corn where the archaeologists have dug their test pits.

Here, where the religious order that founded Georgetown University once kept scores of enslaved people, experts say they have found the first archaeological evidence of those enslaved at the former plantation at Newtowne in St. Mary’s County.

A dig that ended late last month confirmed the outline of an unusual rectangular structure on the site, as well as artifacts such as ceramics and clay pipe stems, said Julie Schablitsky, an archaeologist with the Maryland State Highway Administration who directed the project.

They are the first physical links to slavery on the site and support the extensive written narrative of the Jesuit plantations, Schablitsky said. The findings are at least 300 years old and date to the early decades of the Maryland colony.

The story of the Jesuits is well known, she said: “Their history and their stories are in the libraries and the archives.”

“The stories of the enslaved are in the ground,” she said.

The discovery is another piece in the saga of the early Catholic plantations in Maryland, their link to Georgetown and the culminating sale by the Jesuits of more than 200 enslaved people in 1838 to save the college.

“This is a very, very rare” find, Schablitsky said.

During ground-penetrating scans this year, the rectangular design, which looked like a palisade, “jumped out at us, and screamed, ‘Something’s here!’” she said. The scans also suggested the existence of a door and the base of a chimney inside.

“Usually what happens when you have a palisade, it’s a defensive work, and inside, you would have had the buildings and the structure,” she said. Soil stains hint that there may have been such structures inside and that people were living there, she said.

“Based on the artifacts … and just the location on the landscape, it’s suggestive of being lived in by enslaved Africans and African Americans,” Schablitsky said.

In addition, when she and other experts dug down last month, they found a pit for refuse outside the door, as if trash had been swept there from within.

“It was filled with all sorts of animal bones,” she said. “The preservation was so amazing that we had fish scales that were 300 years old … bits of ceramics, bits of pottery from England [that] told us that these people had been here since at least 1700, maybe even longer.”

“We know so little about the enslaved during that time period,” she said. “This is the opportunity of a lifetime for archaeologists in southern Maryland to learn more about the people who came here that were enslaved.”

After the Maryland colony was founded by English Catholics in the 1600s — the Ark and the Dove landed on St. Clements Island in the Potomac River in 1634 — the Jesuits began establishing missions, later supported by the work of hundreds of enslaved people, historians have said.

At Newtowne, their plantation occupied much of the current 790-acre Newtowne Neck State Park, on a remote peninsula bounded by Breton Bay, St. Clements Bay and the Potomac River, southwest of Leonardtown.

The property had been acquired by the Jesuits in 1668.

By the early 1800s, the Jesuits had bought or been given more than 300 enslaved people, who labored at several different plantations in eastern Maryland, according to Georgetown University historian Adam Rothman.

The Jesuits were among the biggest planters in Maryland, Rothman has written, and historians have long known that the work of those they enslaved helped maintain and preserve institutions such as what was then Georgetown College.

As early as 1717, when records show there were 15 enslaved people on the property, they built a manor house on the Newtowne plantation and in 1789 replaced it with the stately brick house that stands near the church today.

“The Jesuits were very wealthy,” said Julia King, professor and chair of the anthropology department at St. Mary’s College of Maryland, who worked on the project. “That brick house is a huge statement …. These are no slouches when it comes to finances.”

Newtowne was also an important educational site, Rothman said in a talk last year at St. Francis Xavier Church. There were schools present there in the 1640s and 1670s.

The rise of Catholic education was “intimately connected” to the institution of slavery, Rothman said.

But in 1838, with Georgetown in debt, the head of Maryland’s Jesuits sold 272 of their enslaved people — 56 from Newtowne — to buyers in Louisiana to pay the college’s bills.

The sale, which netted the equivalent today of roughly $3 million and saved the school, displaced and broke up families who had worked on the Jesuit tobacco farms for generations, according to Rothman.

Older men, women, teenagers, toddlers and infants were included in the sale.

Many were sent from Alexandria, Va., to New Orleans aboard the Katherine Jackson, a ship used for domestic transport of enslaved people, recalling a journey their forebears made from Africa years earlier, according to the Georgetown Slavery Archive.

The “palisade” archaeological site had been discovered in 2015. King said she and her students found it during a field survey to assist Maryland’s Department of Natural Resources, which was studying the area.

“Nobody had found that site before,” King said.

But it was not clear what it was. “You have to remember that enslaved-person quarters in this period could have been just log structures that sat on top of the ground,” she said. “So you’re not necessarily going to see foundations that go into the ground.”

Meanwhile, not all the Jesuits’ enslaved had been sold south.

“For the past four years, the focus has always been on the 1838 sale,” said the Rev. Dante Eubanks, of Leonard-town, Md., who said he has done extensive research on the history.

Some of the enslaved the Jesuits sold went to people in Maryland, Eubanks said. Some stayed at Newtowne. He believes his ancestors were among those who remained at Newtowne.

Eubanks, a program manager at the Naval Air Station Patuxent River and pastor of the New Covenant Christian Worship Center in Hollywood, Md., said many of the local Catholic farmers gave the priests enslaved people in their wills or “as an offering.”

He said he believes his ancestors were probably part of such a donation.

“Back then, currency was in tobacco,” he said. “It was in the enslaved, and unfortunately the enslaved were considered property.”

“That’s why this archaeological dig is very important to me and important to my family,” he said. “It’s no longer just saying, ‘Oh, my family came from St. Mary’s County.’ I can say, ‘My ancestors worked and lived, endured and survived at Newtowne Manor Jesuit Plantation.’”

“It’s overwhelming,” he said. “It’s calming. It’s alarming …. But when I stand back and look, I can breathe and say, ‘I know where they were.’”