Exorcism: More frequent in US, post-violence 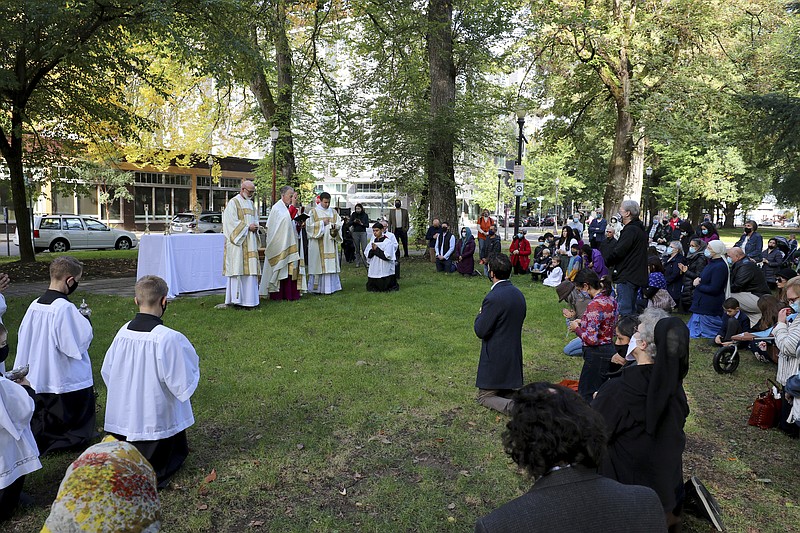 Archbishop Alexander Sample conducts an exorcism to rid the city of evil influences in the North Park Blocks of Portland, Ore., during a rosary and exorcism for peace and justice in the city. They performed the rite in well-attended outdoor ceremonies to drive out any evil spirits lingering after acrimonious protests. (Catholic Sentinel via AP/Ed Langlois)

The events’ distinctive character gave a hint of how exorcism — with roots in ancient times — has evolved in some ways as it becomes more commonplace in many parts of the world.

In Portland, Ore., Archbishop Alexander Sample led a procession of more than 200 people to a city park on Oct. 17, offered a prayer, then conducted a Latin exorcism rite intended to purge the community of evil. The event followed more than four months of racial justice protests in Portland, mostly peaceful but sometimes fueling violence and riots.

On the same day, 600 miles to the south, San Francisco Archbishop Salvatore Cordileone performed an exorcism ceremony outside a Catholic church in San Rafael, Calif., where protesters had earlier toppled a statue of Father Junipero Serra.

“We pray that God might purify this place of evil spirits, that he might purify the hearts of those who perpetrated this blasphemy,” Cordileone said.

Serra was an 18th-century Spanish missionary priest, long praised by the church for bringing Roman Catholicism to what is now the western United States. His critics say that Serra, in converting American Indians to Catholicism, forced them to abandon their culture or face brutal punishment.

Cordileone said the exorcism prayers in Latin, remarking that “Latin tends to be more effective against the devil because he doesn’t like the language of the church.” The prayers were different from those offered when a person is believed to be the subject of demonic possession.

Two experts on exorcism — religious studies professor Andrew Chesnut of Virginia Commonwealth University and the Rev. Pius Pietrzyk of St. Patrick’s Seminary and University in California — recalled no other recent exorcisms in the U.S. similar to those in Oregon and California.

Chesnut noted that in Mexico, some high-ranking Catholic clergy performed an exorcism in 2015 seeking to expel demons nationwide. Participants said they were responding to high levels of violence, the practice of abortion and the crimes of the drug cartels.

More broadly, Chesnut said exorcism, in its traditional form as a demon-chaser, is increasingly widespread around the world, though there are no official statistics.

“The Exorcist,” the classic horror film from 1973, depicts exorcism as a relatively rare and secretive endeavor. But it’s now so common that some exorcists combat demons remotely using their cellphone, according to Chesnut.

He says the driving force behind the surge since the 1980s has been the spread of Pentecostal churches that highlight the conflict between demons and the Holy Spirit, especially in Latin America, Africa and parts of Asia, including the Philippines.

Brazil is a particular hot spot for exorcisms, sometimes featured on televised broadcasts of church services. Priests wave their hands over a person deemed to be possessed, shout orders for the devil to depart, then hold their hand to the person’s forehead and push them backward, occasionally resulting in their collapse.

The Catholic church is not ceding the practice of exorcism to these other faiths. Pope Francis has acknowledged the legitimacy of the practice, and a Vatican-approved university in Rome has been conducting exorcism training sessions during Francis’s papacy for priests from around the world.

In the United States, one of the premier Catholic entities focused on exorcism is the Pope Leo III Institute in the Chicago suburb of Libertyville. Though operating with approval of the U.S. Conference of Catholic Bishops, it is independent and privately funded, with a focus on training and educating priests about exorcism.

In a statement on its website, the institute acknowledges there is some skepticism about exorcism and demonic possession.

“Many Catholics are even among those who don’t believe in the devil or his influence upon them,” it says. “It is important to recall that Pope Francis has never been shy about speaking about the devil, and has warned many times against naiveté in the fight against Satan, even in the 21st century.”

One perennial challenge for modern-day exorcists is to determine if a person potentially possessed by the devil is in fact suffering problems better addressed by mental health professionals.

In light of this, the institute says its curriculum “is devoted to the importance of knowing how to discern whether someone is truly possessed, or whether they have some sort of psychiatric or psychological illness.”

The institute says it agrees with those who say exorcisms have increased in recent years but adds that “there is no serious statistical study of the practice.”

The U.S. bishops conference has placed a detailed Q&A about exorcism on its website, “in hopes that clear information is brought to bear on a topic that is often shrouded in mystery or misinformation.”

Some of the basic points in the Q&A:

There are two kinds of exorcisms: minor and major. The minor form is performed routinely during baptisms; the major form entails the expulsion of demons and should be performed only by a bishop or a priest who has a bishop’s permission.

A person should be referred to an exorcist only after undergoing a thorough examination including medical, psychological, and psychiatric testing.

It’s permissible, under certain circumstances, for a Catholic priest to perform exorcism on a Christian who is not Catholic.

In cases involving demonic possession of an individual, the identity of the exorcist should be kept secret or at most known only to the other priests of the diocese so as not to overwhelm the exorcist with random calls and inquiries.

When the person undergoing the exorcism is female, there should be at least one other female present “for the sake of propriety and discretion.”

Information for this article was contributed by Mauricio Savarese of The Associated Press.