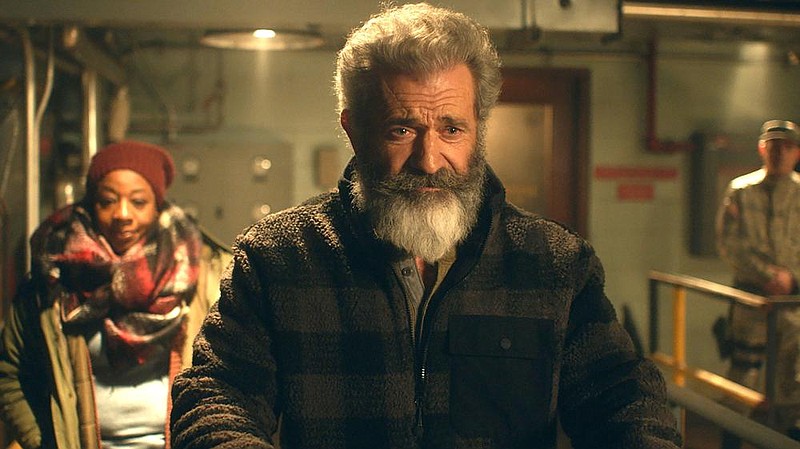 Ruth Cringle (Marianne Jean-Baptiste) has some encouraging words for her husband, Chris (Mel Gibson), aka Santa Claus, in the gritty and surprisingly earnest “Fatman."

If you've seen the "Fatman" trailer on the internet or elsewhere, you may have seen enough.

The trailer is brilliant. A little tone poem work of art, a miracle of compression. It tells all the story that need be told, it gives up images to furnish the imagination. Mel Gibson as a depressive Bukowski-esque Santa Claus, contemplating retirement, "full of a loathing for a world that's forgotten." An evil Alex Keaton-esque kid disappointed by Christmas day coal. Walton Goggins as the preternaturally competent hitman retained to murder the jolly elf. Intimations of a secret military project that has hijacked Santa's workshop. A violent showdown that requires Santa to suit up one last time ...

But the movie itself, probably not.

Or rather, definitely not, though it's better than it might have been. Gibson, once again on the prowl for something like redemption, is quite enjoyable as Chris Cringle, aka Santa Claus, aka the titular fat man. You can feel his weariness and disappointment, which commingles with the weariness and disappointment that Gibson probably feels in real life. (Though he's got his net worth to keep him warm.)

And, as usual, Goggins is fun to watch, especially when he's intimidating a middle school science fair winner by threatening to kill her entire family, including her dog, Jo Jo Buttons.

But compared to the trailer, the movie is a slog. It's ordinary, and the obvious cynicism of the project -- meant to be part of the fun -- only makes it feel tawdry and lame. As a trailer, it's a post-modern meta-joke. As a movie, it's unsustainable.

Brothers Ian and Eshom Nelms, co-writers and co-directors, try really hard to make this more than just another instant would-be cult classic, which defeats the whole idea. It's always a problem when good filmmakers -- and the Nelmses made 2017's "Small Town Crime," a smart and satisfying neo-noir that stars John Hawkes as an alcoholic ex-cop compelled to investigate a lurid murder -- set out to make a deliberately "bad" movie aimed at that demographic, primarily male and adolescent in outlook if not age.

The lack of genuine ineptness in "Fatman" works against it. There's no inadvertent humor here, just a jokey premise to which the filmmakers grimly keep faith. Bless their hearts, they're committed to this doomed campaign, to making as good a movie as they can under the circumstances.

This means "Fatman" isn't actually bad, just curiously dull in the parts where it isn't pushing its outrageousness. Which, come to think of it, are pretty dull too. There are nice touches, like how Goggins' "Skinny Man" attempts to compensate for his deprived childhood by buying up the favorite gifts of those in financial distress, or Gibson's Chris dressing a Christ-like wound in his side suffered during one of his yearly sorties.

The business about the U.S. government propping up Santa's operation because of the perceived economic benefits of Christmas giving is promising -- there might be an interesting movie in Chris' less exciting off-duty adventures. I like the idea of a barfly Santa who knows who's naughty and who's nice and how they got to be that way. The scenes between Chris and his wife, Ruth (Marianne Jean-Baptiste), are authentically touching.

Yet, we have to have the shooting and the blowing-up parts. And it has to be 100 minutes long. Oh well.

"Fatman" is in theaters today, though the distribution will move to streaming platforms in a couple of weeks. But the trailer is all you need.

Elsewhere the theaters are fairly busy, with "Freaky," "Ammonite," "Echo Boomers" and Ron Howard's "Hillbilly Elegy" all opening. Our Courtney Lanning says that "Wolfwalkers," an animated film, is getting a theatrical release in advance of it taking up residence on Apple TV+.

If you're looking to go deeper into streaming land, Spanish director Oliver Laxe's "Fire Will Come" -- a Jury Prize winner in the Un Certain Regard side competition at the 2019 Cannes Film festival -- is available for streaming at afisilver.afi.com. It's about a convicted arsonist (Amador Arias) trying to get back on his feet after his release from prison while living on his family farm with his mother (Benedicta Sánchez).

Also available on the site is the documentary "Harry Chapin: When in Doubt, Do Something" which explores the singer-songwriter's campaign to end world hunger and poverty. (Chapin died in 1981 in a car wreck that occurred after he had a heart attack while driving. He was 38 years old.)

Netflix offers Jay Duplass starring in "Prospect," the R-rated story of a prospector who travels to a distant moon with his daughter (Sophie Thatcher), in search of mineral riches. Slashfilm calls it "the best indie science fiction movie since 'Moon,'" which is pretty high praise.