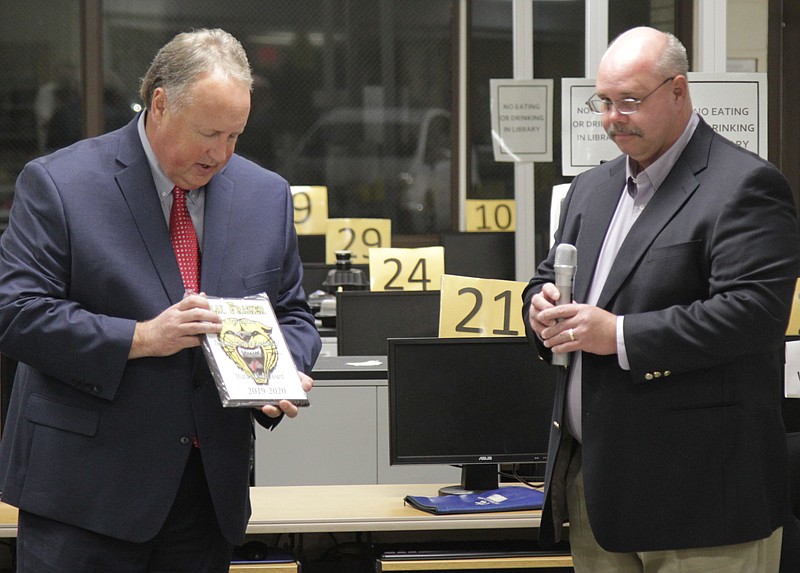 Incoming Watson Chapel School Board President Kevin Moore, right, presents Alan Frazier, the outgoing president, with a plaque honoring him for his service as president. As new board officers were selected Monday night, the board also voted in Sandra Boone as vice president and Goldie Whitaker as secretary. (Pine Bluff Commercial/Dale Ellis)

Enrollment in the Watson Chapel School District has stabilized over the past few weeks, Superintendent Jerry Guess told the School Board Monday night, with Monday's enrollment recorded at 2,169 students, 44 students below last year's three-quarter average.

"Frankly, it's staying pretty stable," he said. "It's actually inching up a little bit. It's been in the low 2,160s and at least it's not going down quickly; we just didn't know what to expect this year."

Kristy Sanders, chairman of the Ready for Learning Committee, said that the number of virtual students had gone down to 1,011 students, the last one arriving on school grounds at 1:30 Monday afternoon. Since Oct. 16, which was report card time, Sanders said, 92 virtual students had resumed on-site classroom instruction. Since the beginning of school, she said, a total of 362 students had returned.

"So our babies are coming back," Sanders said.

She said the district has engaged numerous staff members in an effort to track down students that were having trouble with virtual learning and to talk to them and their parents to encourage the students to come back to school for on-site instruction.

"Lots of phone calls were made to parents from secretaries, counselors, principals," Sanders said. "Everybody got involved after looking at report card grades and saying, 'Well, hey, do you think this is just not working well for you since your child is not being successful? Why don't you consider coming back?'"

She said with all of the protocols put into place for sanitizing the schools, the campus is one of the safest places students can be.

Guess reported that the district's ROTC unit had received a visit and a unit inspection from the U.S. Army Cadet Command 5th Brigade from Fort Sam Houston and had come through with flying colors.

"They spent a lot of time here," he said. "It is chilling to think about the service of these young people to our country and the ambition they have to serve in the military. It's also inspiring to know how great a job they did."

Guess said he received a letter from the 5th Brigade informing him that the unit had been selected as an honor unit after achieving excellent status, placing it among the top of ROTC units nationwide.

"For them, to be rated excellent or an honor unit means that they've achieved that level of excellence anywhere in an ROTC unit," he said.

Guess reported that 84 school districts across the state have been reported to have five or more active coronavirus cases.

"We are not on that list," he said, but he then cautioned against getting complacent. "That's not to say we won't be on it next week. You all know that it's a matter of the contact our students and staff have out in the community as well as here, and we believe that a lot of our quarantine situation results from contact out in the community."

Guess said that school administrators have been closely watching to ensure that everyone wears a mask on campus, uses water bottles and avails themselves of sanitizer located around the district campuses. He said the hallways, classrooms and other areas of the school campuses are sanitized nightly using a high-volume mister.

"I believe we are doing a really good job of keeping our buildings and our grounds clean and sanitary," he said. "So, it's great to notice that we aren't on that list, and I think that's due to the hard work of a lot of people here in this audience."

Following a 20-minute executive session the board accepted the resignation of a bus driver and the termination of a cafeteria employee.