The World in Brief 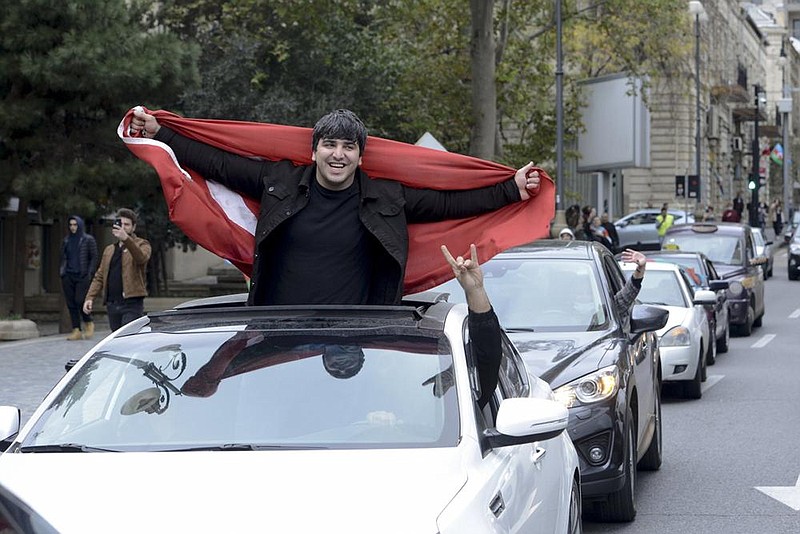 Azerbaijani man with the national flag celebrates after the country's President claimed Azerbaijani forces have taken Shushi, a key city in the Nagorno-Karabakh region that has been under the control of ethnic Armenians for decades in Baku, Azerbaijan, Sunday, Nov. 8, 2020. (AP Photo)

MOSCOW -- Azerbaijani forces have taken control of the city of Shushi in Nagorno-Karabakh, where fighting with Armenia has raged for more than a month, Azerbaijan's president said Sunday.

In a televised address President Ilham Aliyev said that "Shusha is ours -- Karabakh is ours," using the Azerbaijani version of the city's name.

However, Armenian Defense Ministry spokesman Artsrun Ovannisian said on Facebook after Aliyev's claim that "fighting in Shushi is continuing. Wait and believe in our troops."

Nagorno-Karabakh's emergencies committee reported intense fighting in other parts of the region.

Shushi is of significant military value because it sits on heights about 6 miles south of the region's capital, Stepanakert, and lies along the main road connecting Nagorno-Karabakh with Armenia.

Along with its strategic value, Shushi is culturally significant as a onetime center of Azerbaijani culture, noted for music and poets.

Aliyev vowed to continue the fighting until Armenia withdraws from the territory.

No one immediately claimed responsibility for the attack. But Wahidullah Jumazada, a spokesman for the provincial governor, blamed insurgents who he said often fire mortar rounds or rockets toward military bases in the area but miss their intended targets.

At least four children and three men were wounded in the attack, he said.

Violence has soared in Afghanistan in recent months, even as the Taliban and government negotiators hold peace talks in Qatar to seek an end to decades of relentless war in Afghanistan. The two sides have made little progress.

The U.S.' peace envoy for Afghanistan, Zalmay Khalilzad, has been pressing for an agreement on a reduction of violence or a cease-fire, which the Taliban have refused, saying a permanent truce would be part of the negotiations.

The talks are part of a negotiated agreement between the United States and the Taliban to allow U.S. and NATO troops to withdraw from Afghanistan, ending 19 years of military engagement.

Earlier this month, Islamic State militants stormed Kabul University as it hosted a book fair attended by the Iranian ambassador, sparking an hourslong gunbattle that left at least 22 people dead and 22 wounded at the war-torn country's largest school.

The former economy minister inherits a deeply polarized nation struggling with the coronavirus pandemic and the economic hardships it has caused as well as sharp divisions over the 14 years in power for Morales, the country's first Indigenous leader.

Arce promised "to rectify what was bad and deepen what was good" as he took office after an election in which his Movement Toward Socialism party won 55% of the vote.

Arce, 57, is remembered by many Bolivians for overseeing a boom time for Bolivia's economy as the country benefited from rising global prices for its commodities and as the leftist government's social policies helped reduce poverty.

He has promised to retake that state-led model to rebuild and stabilize the economy.

Police crack down on Belarus protest

KYIV, Ukraine -- Police went after demonstrators in Belarus' capital who were demanding the resignation of the country's authoritarian president on Sunday, the 90th consecutive day of protests.

Thousands of demonstrators tried to enter the center of Minsk from several directions, but police cordoned off the area with armored vehicles and riot officers and prevented the protesters from assembling in a single place.

The wave of protests began after the Aug. 9 election that official results say gave President Alexander Lukashenko a sixth term in office. The opposition and some poll workers say the results were manipulated.

Lukashenko, who has suppressed opposition and independent news media since coming to power in 1994, has refused dialogue with opponents and has alleged that Western countries have incited the protests.