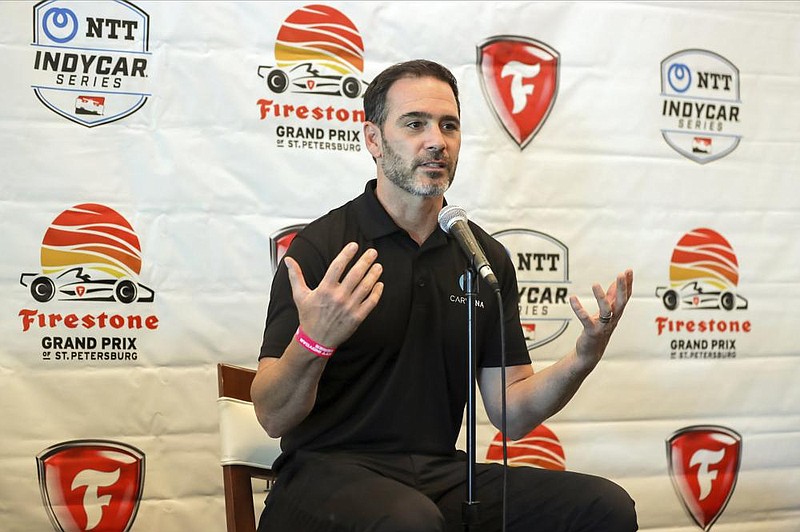 Jimmie Johnson speaks about joining the team of Chip Ganassi for the IndyCar series at a press conference during the IndyCar race weekend Saturday, Oct. 24, 2020, in St. Petersburg, Fla. (AP Photo/Mike Carlson)

AVONDALE, Ariz. -- Jimmie Johnson was the first one down the stairs in a diving competition at Tony Stewart's birthday party. He playfully tossed mini hamburgers across a suite Denny Hamlin had rented in Las Vegas, and later wrestled Chad Knaus on the floor of the same casino.

The two revelers were capping a raucous night of celebrating yet another title when one of their jumbo championship rings slipped away and rolled across the casino. Another time, Johnson broke his wrist surfing atop a moving golf cart at his foundation's tournament. He had Snoop Dogg play at his seventh championship party.

Those are just a sampling of the tales about Johnson, who is retiring from full-time NASCAR competition in Sunday's season finale at Phoenix Raceway. He leaves the sport as a seven-time champion ranked sixth on the all-time wins list with 83.

"He's as close to perfect as you can get," team owner Rick Hendrick said Friday, hours after Johnson told a story about the late Ricky Hendrick that his father had never heard before. The story was not suitable for a family audience so Hendrick chose not to share it.

Johnson's two decades as driver of the No. 48 established him as the best of his generation -- he won five consecutive titles during a jaw-dropping run of 35 victories from 2006-2010. That run made him the only race car driver to win The Associated Press' Male Athlete of the Year award.

His seven championships are tied with Hall of Famers Richard Petty and Dale Earnhardt. Kevin Harvick with 58 victories is the closest active driver to Johnson's win total.

The reign of supremacy from Johnson and Knaus, his longtime crew chief, frustrated NASCAR fans, many who argued Johnson was so boring they just couldn't watch anymore.

"Jimmie did it without a lot of fanfare. He could have been cocky. He could have been challenging other drivers in the media, whatever. But he wasn't that way," Hendrick said. "I think the success he had got to be almost so routine that people just didn't appreciate the talent."

All that winning for the No. 48 perhaps was a little tired.

Yet Johnson, the renaissance man, is far from boring.

He's generous and genuine, a true professional who glides seamlessly from meetings with executives to mingling with fans and partying with world-famous friends and workout partners. The 45-year-old Californian considers Charlotte, N.C., his home, but Johnson and his family have a place in Aspen, Colo., where he fly fishes, skis and rides dirt bikes with his two daughters.

He's donated more than $12 million to children's educational causes, and his wife owns a respected art gallery in Charlotte. His family is close and well-traveled and after 19 years driving for Hendrick Motorsports, Johnson is ready to do other things.

First on his list is a mind-blowing move to IndyCar, where he plans to race 14 events on road and street courses next season. He'll be a 45-year-old rookie when he fulfills his childhood dream of hurtling an open wheel car through the streets of Long Beach, Calif.

Johnson is already immersed in this next venture: He sold the sponsorship to Carvana himself and spent Monday of his last week as a NASCAR driver testing with Chip Ganassi Racing in Alabama.

He may enter sports car races, domestically or even internationally, run marathons or triathlons, perhaps enter some cycling competitions.

Since his final title in 2016, Johnson has had a rough run. His last victory was in 2017, and he failed to make the playoffs in his final season in part because he missed the first of 685 Cup races when he tested positive for covid-19 in June.

Some thought he'd come back in 2021 because the pandemic spoiled any farewell tour and because NASCAR has adjusted its scheduling to one-day events instead of three-day weekend shows.

Johnson indeed wishes he'd been able to visit with fans this final season but is ready to go.

"I feel good and I am so excited to finish the season, to be an athlete that can choose when their final season is going to take place," Johnson said. "I know how fortunate I am to be in that place. The year has not turned out how I wanted, but I am very excited to reach the end of this chapter of my life.

"I'm in a celebratory place," he said. "I've told the world it's happening and I feel good about it."

WHEN 2 p.m. Central on Sunday