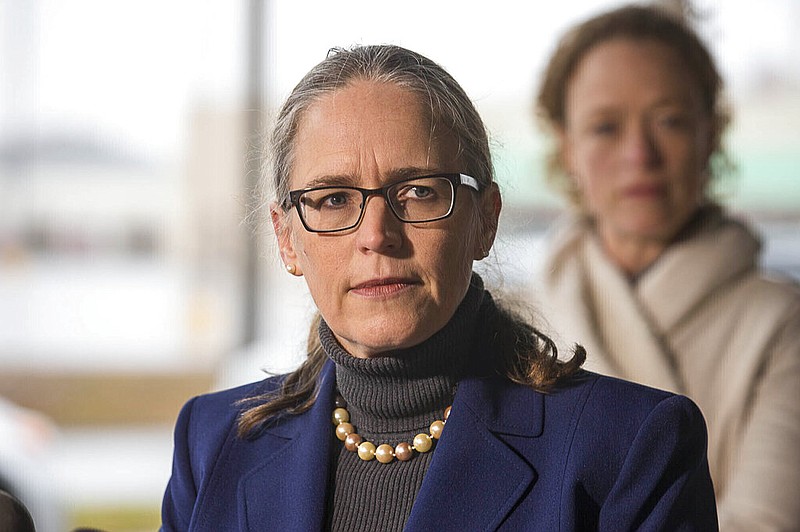 Democrat Carolyn Bourdeaux is shown in Lawrenceville, Ga., in this Nov. 12, 2018, file photo. Bourdeaux officially won Georgia's 7th Congressional District seat on Friday, Nov. 6, 2020, marking the first seat that Democrats picked up in the House in the 2020 election.

Counting of absentee ballots and in-person votes cast early continued long past election night, forcing a tense wait before the race could be called Friday.

Bourdeaux had come close to winning in 2018, falling fewer than 500 votes short of defeating Republican incumbent Rep. Rob Woodall in that race. Woodall didn’t seek another term in the district northeast of Atlanta.

Bourdeaux is a college professor who previously worked in government. She emphasized expanded health care in her campaign and used the momentum she built two years ago to push past McCormick, an emergency room physician and Marine Corps veteran making his first-ever bid for office.

It’s the first time a Democrat has won the seat since Buddy Darden lost to Republican Bob Barr in the 1994 GOP takeover of the U.S. House, and reflects the rapidly diversifying population of the district.

“Georgia’s 7th Congressional District is ready for change,” Bourdeaux said Thursday, when she declared victory before The Associated Press called the race in her favor. “I am here to be an advocate on behalf of the people of this district.”

McCormick had no immediate comment after the race was called Friday. Campaign spokesman John Simpson said McCormick planned to make a statement after the remaining ballots were counted in Gwinnett County, where most of the district’s voters live.

Bourdeaux, befitting her background as a public policy professor and former budget director for the Georgia state Senate, took a plan-heavy approach to her race. She barely paused after her 2018 loss to Woodall, winning a majority against a crowded Democratic field that smelled opportunity in the northeastern suburbs.

McCormick, backed heavily by the free-trade, anti-regulation Club for Growth, also posted an outright victory against heavy primary opposition. McCormick sought to appeal to immigrants and native-born Americans on a platform that emphasized growth and economic opportunity, dismissing government as a “necessary evil” in one debate.

Bourdeaux and McCormick clashed most on health care and the covid-19 pandemic. The Democrat pushed for more expansive government support for health care, while McCormick called for deregulation and further loosening of the rules under former President Barack Obama’s health care overhaul.

Bourdeaux lambasted McCormick for what she called the Republican’s lackadaisical approach to pandemic precautions, while McCormick bristled at having his physician’s expertise called into question and said an approach that emphasized economic reopening was justified by declining coronavirus cases.

In the neighboring 6th District, Democrat Lucy McBath was reelected Tuesday, defeating Karen Handel in a rematch of the 2018 election. Handel, a former Georgia secretary of state, was the incumbent in the district that covers parts of Cobb, Fulton and DeKalb counties when she lost to McBath.