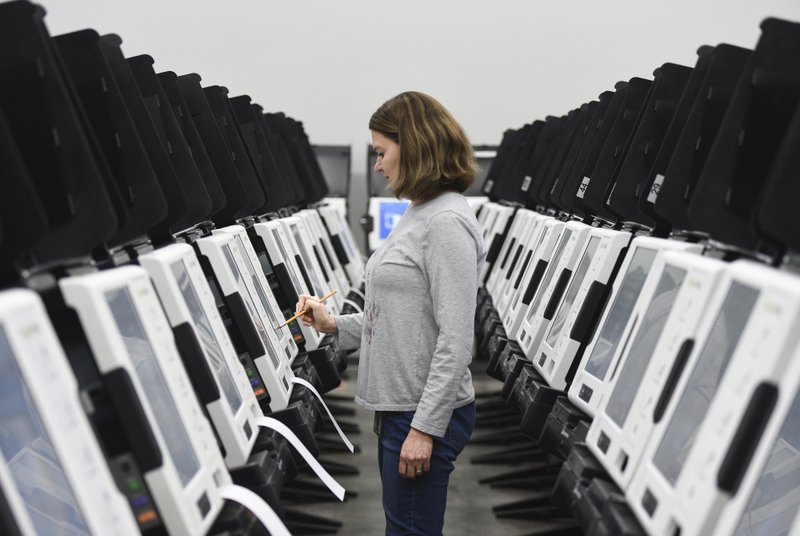 No incumbent legislators in Benton nor Washington County districts lost in Tuesday’s election.

Reps. David Whitaker and Nicole Clowney, both Democrats of Fayetteville, won reelection. So did Republican Reps. Robin Lundstrum of Elm Springs and Clint Penzo of Springdale.

Sen. Bart Hester, R-Cave Springs, is known in particular for his attempts to protect businesses from what he sees as over-regulation.

One of the reasons Ronetta Francis ran against him, she said, was to work to repeal a state law Hester backed that prevents city governments from passing civil rights laws to protect people from discrimination based on sexual orientation and other traits.

Final, though unofficial, results from Benton and Washington counties are:

Sen. Jim Hendren, R-Sulphur Springs, is the outgoing president of the Senate, a position traditionally held for only one Senate term. Ryan Craig is a first-time candidate who announced, but campaigned little.

Final though unofficial results from Benton and Washington counties are:

Rep. Charlene Fite, R-Van Buren, is chairwoman of the House Committee on Aging, Children and Youth, Legislative and Military Affairs. She is known as an advocate for disadvantaged and at-risk youth.

Democratic challenger Lou Reed Sharp is a nurse, a business owner and advocate for rural development. The district includes parts of Washington and Crawford counties.

Final results from Washington County and partial Crawford County results on Tuesday are:

Rep. David Whitaker, D-Fayetteville, is a four-term House member who is both a former House minority leader and, before politics, was an assistant city attorney for Fayetteville. Republican challenger Brian Hester is a brother of Sen. Bart Hester.

Rep. Nicole Clowney is a first-term House member known as the co-sponsor of the prefiled Hate Crimes bill for the next regular legislative session, which starts in January. Republican challenger John La Tour is a former member of the Fayetteville City Council who ran as a pro-business candidate.

Final though unofficial results from Benton and Washington are:

Rep. Robin Lundstrum, R-Elm Springs, is one of the most fiscally conservative members of the House. She has said she’d eliminate the property tax if she could. Michael Bennett-Spears is a Democrat in his first race. He criticized Lundstrum for policies that penalized employees too much while benefiting business.

Complete but unofficial votes released Tuesday from Benton and Washington counties are:

Rep. Clint Penzo, R-Springdale, is known for his efforts to protect the region’s minority population from exploitative adoption practices. Hawley Woods is a first-time candidate and Democrat who ran on the issue of providing better, less bewildering laws to ensure every Arkansan received adequate health care.

Godfrey, D-Springdale, provided Northwest Arkansas’ biggest election shock in 2018 when she defeated the incumbent in a traditionally Republican downtown district.

This year, Republican challenger Jed Duggar ran as a more socially conservative and pro-business candidate. The district has historically had one of the lowest turnouts of any in the region. Tuesday was no exception.

Kelly Krout is a a foster parent and children’s book author in her first race. The Democrat described herself as a better-rounded candidate who would represent all the voters in the district.

Delia Haak is a local businesswoman, college professor and former chairwoman of the federal Illinois River Compact Commission between Arkansas and Oklahoma. She prevailed in both the Republican primary in March and a subsequent runoff election.

Nick Jones is a first-time candidate who is a substance abuse counselor who advocated treating the abuse as a health care issue. The two ran for the seat left vacant by Rep. Dan Douglas, R-Bentonville, who didn’t seek reelection.

Rep. Jim Dotson, R-Bentonville, is a social conservative who ran on his record of pro-school choice and anti-abortion, along with his experience as legislator and leader of House Republicans.

Daisy Bonilla, his Democratic opponent, is a social worker who ran on expanding Medicaid and improving mental health care.

Jene Huffman-Gilreath, the Democrat in the race, is a manager at Rogers Water Utilities. Although a Democrat, she formerly worked on the staff of then-U.S. Sen. Tim Hutchinson, R-Ark. She ran on meeting this growing region’s infrastructure needs.

Republican Josh Bryant is a member of the Benton County Quorum Court and a contractor who ran as a pro-business candidate.

Jon Comstock is an attorney who owns a mediation services company and is a former circuit judge. He ran on providing alternatives to prison for drug offenses.