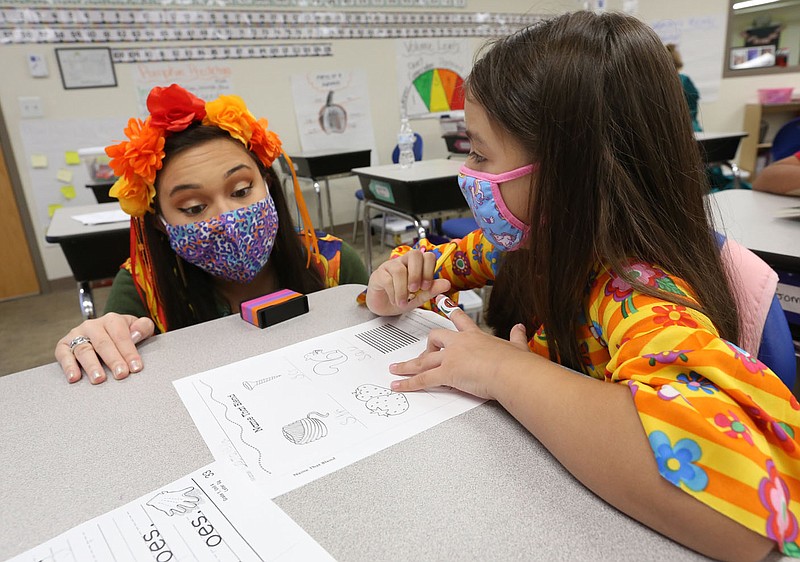 First grade teacher Kailan Johnson works with Cataleya Orozco-Rodriguez Thursday, October 29, 2020, on an english assignment in class at LISA Academy in Springdale. Most Northwest Arkansas districts saw a decline from last year. Likely culprit is parents keeping their kids home who otherwise would have been kindergartners this year. LISA Academy in Springdale is one of the few public schools in Northwest Arkansas that's seen a substantial enrollment increase this year. Check out nwaonline.com/201101Daily/ and nwadg.com/photos for a photo gallery.(NWA Democrat-Gazette/David Gottschalk)

SPRINGDALE -- A long streak of enrollment increases in Northwest Arkansas' public schools ended this fall as fewer students showed up for kindergarten and more families chose to home-school.

Enrollment across the public schools in Benton and Washington counties dropped 1.1% this year over last -- the first time in at least 15 years, according to the Arkansas Department of Education.

A total of 87,973 K-12 students enrolled in Benton and Washington counties' public schools as of Oct. 1, the date on which the official enrollment count is recorded each academic year. There were 88,931 students enrolled at the same time in 2019, according to state data.

Enrollment affects how much money the state sends districts. State funding is based on the average kindergarten through 12th-grade enrollment in the first three quarters of the preceding school year.

"Perhaps families whose child was old enough to attend kindergarten decided because of the pandemic to delay that start for a year," said Kelly Hayes, Springdale's deputy superintendent. "So, we could be in for a bigger kindergarten than normal next year."

Parents of a child who has not turned 6 years old on Aug. 1 of a school year may submit a waiver form to their local school district indicating their child won't attend kindergarten that year. That child may be placed in either kindergarten or first grade the following year, depending on the school's evaluation of the child and the parents' preference.

Rogers saw a 2.3% drop in enrollment overall and a 4.7% drop at the kindergarten level. Anecdotally, district officials have heard people are keeping their kindergarten-eligible children home this year because of the pandemic, said Superintendent Marlin Berry.

The district will feel the financial effects of its enrollment loss next year with state funding based on the previous year's enrollment numbers, Berry said.

"So as we go into the spring, that's when we'll really start to focus on the numbers and make adjustments," he said, adding he didn't anticipate any layoffs would be necessary.

Elkins had the highest percentage increase in enrollment among Northwest Arkansas' traditional school districts at 1.5%, as its enrollment increased from 1,250 to 1,269.

Superintendent Jeremy Mangrum said he was pleasantly surprised. He attributed it to the district's efforts to provide a good online option for students this school year.

The state directed school districts to prepare an education program for the coming school year that relies on face-to-face and online instruction with the flexibility to blend them and to pivot from one to the other.

Elkins' enrollment has hovered around 1,250 the past few years. The district in May completed an 8,500-square-foot, six-classroom addition at its primary school in anticipation of growth.

The number of home-schooled children in Arkansas was rising steadily before the pandemic hit, but that number soared this fall.

There are 26,039 children being home-schooled this school year, an increase of 17.6% from last year's 22,151 children, according to the Arkansas Department of Education.

State law requires every child ages 5 through 17 be enrolled in a public or private school unless a child is home-schooled. Parents who choose to home-school are required to notify the superintendent of the school district in which they live. Meeting this annual requirement maintains legal home-school status for the parents or guardians. Districts must submit a copy of each form to the state.

A long-term trend of declining enrollment for three school districts in Washington County continued this year.

The West Fork School District had 907 students on Oct. 1, a 7.2% decline from a year earlier. Lincoln and Greenland sustained enrollment losses of 4% and 1.3%, respectively, from last year.

West Fork, Lincoln and Greenland collectively have seen their enrollments decline 15% in the past five years, from 3,140 students to 2,657 students. The decline is "discouraging," said John Karnes, West Fork's superintendent.

Of the 70 students West Fork lost from last year, about half are being home-schooled, Karnes said.

"I'm hoping we'll get those kids back at some point, maybe some kindergartners we don't even know about," he said. "I feel like we're providing our kids a quality education. Covid has changed how things are done here at school, but overall we feel we've handled it well."

About 30% of the students enrolled in West Fork schools are doing school online, an option the district has worked hard to promote. There were some "hiccups" with the online platform early in the school year, but the glitches have been worked out, Karnes said.

The area's five open-enrollment charter school districts, which are public schools, saw an overall enrollment increase from 3,610 students last year to 3,841 students this year, a 6.4% gain.

Charter enrollment makes up 4.4% of all public school enrollment in Benton and Washington counties, up from 1.9% seven years ago.

Not counted in those numbers are Arkansas Virtual Academy and Arkansas Connections Academy, two online charter schools that draw students from all over the state. Their combined enrollments rose from 4,071 last year to 6,708 this year, a 64.8% increase.

Arkansas Virtual Academy's enrollment was 3,872 as of Oct. 1. The state Board of Education approved two increases to the school's enrollment cap this year, raising the cap from 3,000 to 5,500.

Amy Johnson, the Virtual Academy's principal, said the school's initial enrollment surge this year stemmed from the fear some families had of sending their children back to school during a pandemic.

As the school year progressed, additional students sought to enroll in the Virtual Academy after their former school had sent them home to be quarantined, and families "just want to ensure that their education experience can move forward smoothly without any disruption," Johnson said.

LISA Academy increased its enrollment from 226 last year to 290 this year at its Springdale campus for grades kindergarten through eighth. LISA Academy also operates several campuses in the Little Rock area. This is LISA's second year in Springdale after taking over Ozark Montessori Academy, an open-enrollment charter school that operated for four years. 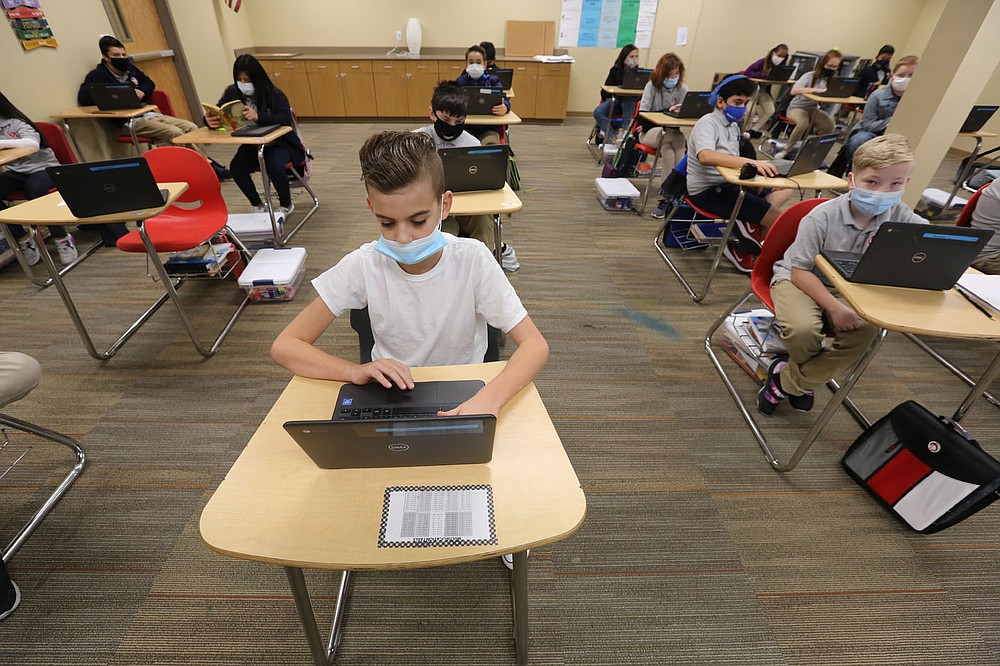 Thomas Taylor, a sixth grade student, studies after taking at test Thursday, October 29, 2020, at LISA Academy in Springdale. Most Northwest Arkansas districts saw a decline from last year. Likely culprit is parents keeping their kids home who otherwise would have been kindergartners this year. LISA Academy in Springdale is one of the few public schools in Northwest Arkansas that's seen a substantial enrollment increase this year. Check out nwaonline.com/201101Daily/ and nwadg.com/photos for a photo gallery.(NWA Democrat-Gazette/David Gottschalk) 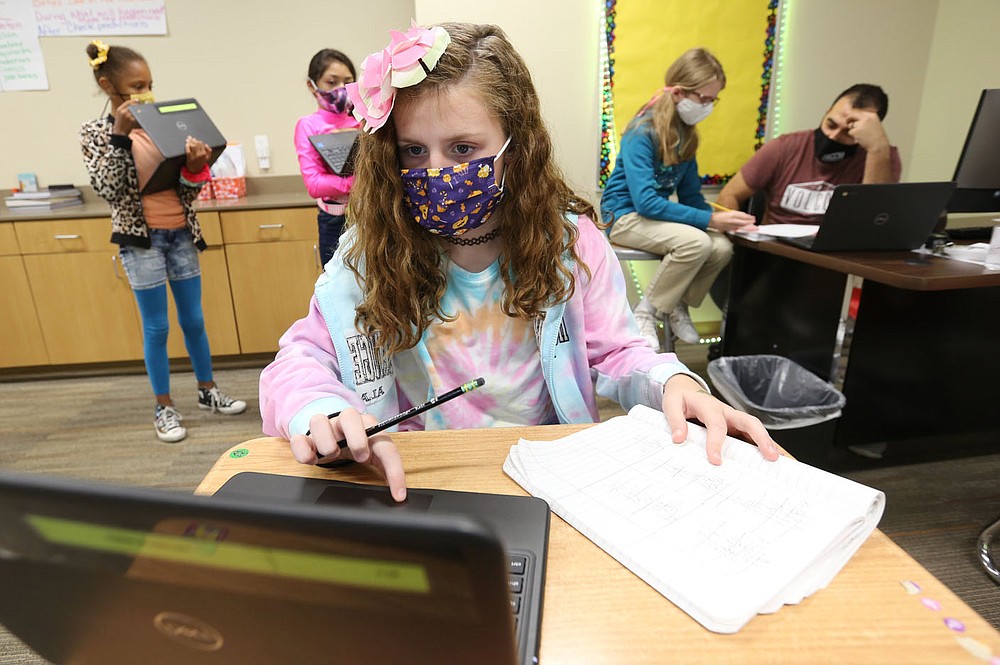 Brooke Powers, a fifth grade student, works with long division Thursday, October 29, 2020, in the math class of Murat Yasar at LISA Academy in Springdale. Most Northwest Arkansas districts saw a decline from last year. Likely culprit is parents keeping their kids home who otherwise would have been kindergartners this year. LISA Academy in Springdale is one of the few public schools in Northwest Arkansas that's seen a substantial enrollment increase this year. Check out nwaonline.com/201101Daily/ and nwadg.com/photos for a photo gallery.(NWA Democrat-Gazette/David Gottschalk) 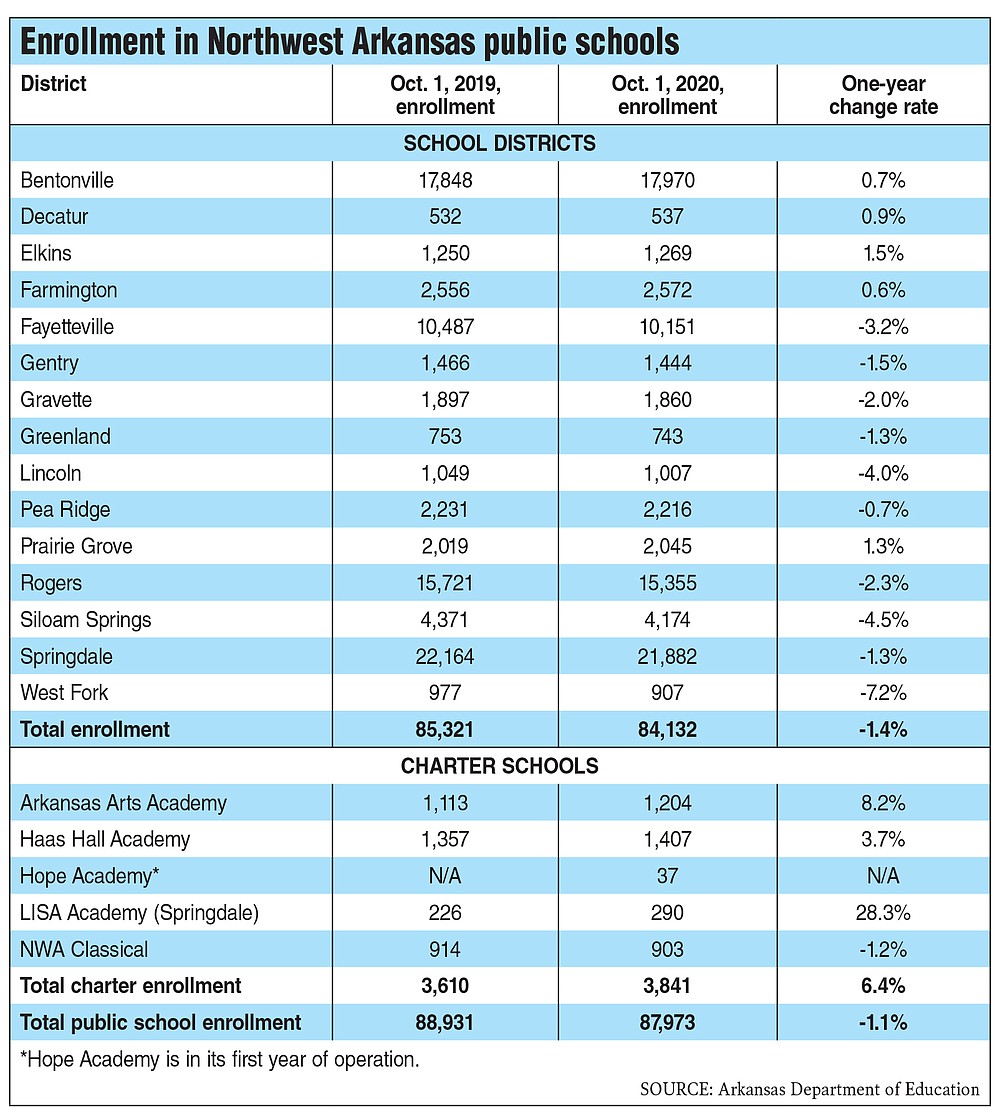 Here’s the number of children home-schooled in Arkansas for the past five school years and the percentage change from the previous year.