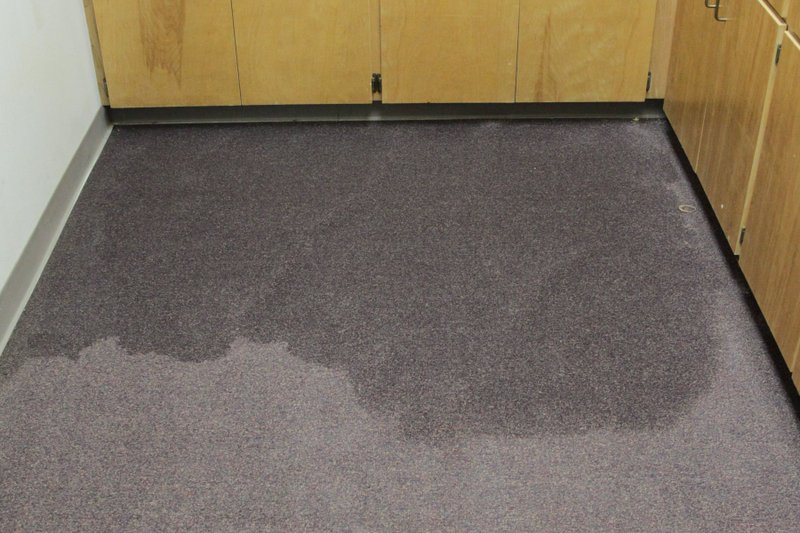 A water leak in a supply room in the Election Commission office covered about a 6-foot-by-4-foot area Wednesday morning. By that afternoon, according to commission Chairman Michael Adam, the leak had spread to a small electrical room next to the supply closet. (Arkansas Democrat-Gazette/Dale Ellis)

Two semitrailers were filled to capacity with 148 ballot markers, 148 stands, 80 poll tablets and printers, 41 vote tabulators, and assorted equipment intended to get the county up to the latest standard in voting hardware and software.

The equipment, supplied by Omaha, Neb.-based Election Systems and Software, was part of a $2.7 million purchase made by the Arkansas secretary of state's office using state and federal funds to provide new voting equipment to nine Arkansas counties that lacked adequate funding to share the cost with the state.

By the March 3 primary, 64 Arkansas counties had upgraded to the new ExpressVote system, purchased through a mixture of local, state and federal funds. Pulaski and Scott counties signed contracts in February to receive new voting equipment. The nine remaining counties -- Bradley, Conway, Fulton, Jefferson, Lee, Monroe, Newton, Searcy and Stone -- were notified last month that they would receive the equipment without having to come up with matching funds after the coronavirus pandemic resulted in a sharp economic downturn.

Even before the pandemic, Jefferson County had made clear that it would be hard-pressed to come up with matching funds to qualify for state assistance to make the purchase. The estimated $940,000 cost of the machines would have required Jefferson County to pay just over $321,000 out of county funds. County officials had been saying for months that declining revenue had left the county with barely enough funds to cover its ongoing obligations.

County employees spent Wednesday morning unloading the trailers, breaking down pallets of equipment, then sorting and stacking all of the containers inside the Jefferson County Election Commission office.

By the time they were finished, boxes of equipment had filled two storage rooms to capacity, more boxes filled the entire back half of the office workroom, and boxes were stacked alongside a wall in a hallway leading to the public meeting room.

"I don't think they realized just how big these things are," said Election Administrator Sven Hipp. "I went to Lincoln County a few months ago, and they had just received 24 machines. They had the whole hallway of their City Hall filled up with boxes."

"I really don't think we've got enough room for it all," Adam said. "We've got stuff stacked everywhere."

One concern about storing the equipment at the Election Commission office, on South Main Street less than a block south of the county courthouse, is the condition of the building, which in the past has been plagued by water leaks, mold and mildew, and which is in generally poor condition. Attempts to stop water leaks in the building had been successful, Adam said, but during heavy rains over the weekend, the building began leaking again.

Boxes containing the stands for the voting machines, which were by far the largest components of the system, were stacked almost to the ceiling in two 16-foot-by-16 foot storage rooms that sit right next to the supply room that has the leak.

"The reason they put them there is because we've got moisture in the building," Adam said. "The stands won't be affected by the moisture like the rest of it."

Adam said the leak, which covered an area in the supply room about 6-feet-by-4-feet Wednesday morning, had grown by the afternoon and had spread into an adjacent electrical room for the office's power supply and internet connections. He said the chronic moisture problem, which had damaged voting machines in the past, is a continuing concern.

"We've been through this twice before," he said. "ES&S was very adamant in a meeting we had just a week ago that moisture was a definite problem and any moisture damage would render all the equipment de-certified, so I'm very concerned."

Pamela Jenkins, chief of staff for County Judge Gerald Robinson, was on-site Wednesday and said the county judge's office had notified Jerry Amick, the state manager for Election Systems and Software, to advise him of the situation.

"The judge advised him of the leak and told him we aren't going to use that room for storage," Jenkins said. "We advised him that we'll keep the machines covered as well to protect them from any contamination."

Robinson said in a telephone interview that he is preparing a storage area inside the county courthouse to put the machines once they are removed from the packaging and assembled. But he said that as a short-term solution, the Election Commission office was adequate to store the machines.

"Right now, the equipment is stacked on pallets inside the building, and we're going to wrap everything up well so that no moisture contamination can get to it," Robinson said. "The state made a big investment on this equipment, and our voters deserve to have the best equipment available to use in elections. We aren't going to let anything happen to it."

Storage issues aside, Adam said the new equipment should make the whole process of conducting elections in Jefferson County much easier. 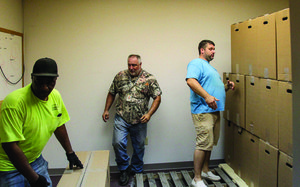 "The old iVotronics really weren't a problem as long as they were in good shape," he said. "But these new machines will be much easier to program, much easier to download the data at the end of the night, and much easier to compile all of the data. It should make our election night reporting much easier and much quicker."