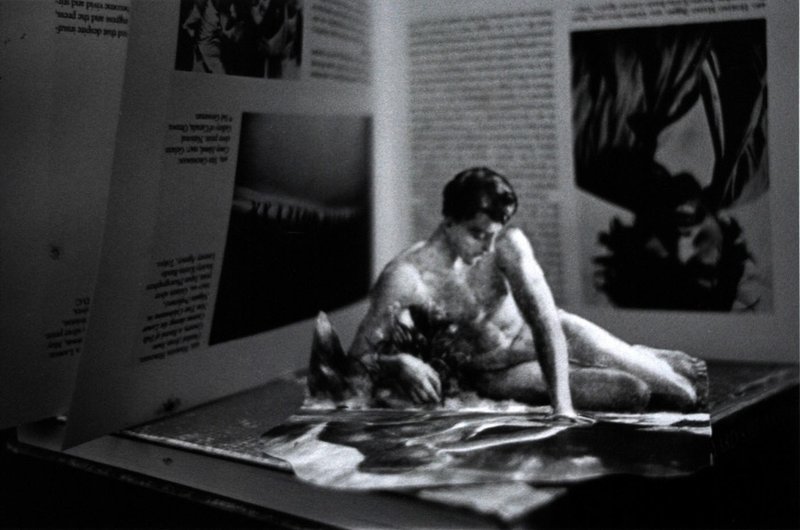 'Unfulfilling Reflections' CJ Branaman Gelatin Silver Print I grew up being read myths. Being Greek, I was told I and my sisters were somehow descended from these larger-than-life characters. These stories became our identity. Stories became my fuel for not only my higher education but my creative endeavors. They became quintessential to my philosophy and how I approached the visual arts. "Unfulfilling Reflections" was directly influenced by the book art of Thomas Allen, who turned mid-century books and pulp fiction paperbacks into still-life scenes.

Here's the good news: Brews -- the coffee shop, craft beer purveyor, music hall and art gallery where all the Eureka Springs locals hang out -- is open for business. The bad news -- because in the time of covid-19, there's always bad news -- is that no art will hang on its walls for awhile.

But more good news comes from John Rankine, one of the owners and an artist himself.

“Right now we are following strict guidelines at Brews,” says co-owner John Rankine. “Everyone must wear a mask to get in, sanitize hands at the door and be at least 6 feet away from other people. Tables will be routinely disinfected after each use; bathrooms and door handles regularly cleaned. All staff must wear masks and wash hands after servicing every table. We have curbside takeout where you can call in your order.” Masks are also available for purchase.

WHERE — 2 Pine St. in Eureka Springs

John Rankine says he is the “baby” among current members John Robert Willer, Drew Gentle, Ernie Kilman, Cynthia Ré Robbins and Larry Mansker, so “covid-19 did play a major part in our decision. It was simply not worth the risk of putting JR and our elder members out in front of the public at this time.

“Like most businesses in town, we struggled, but made it through the winter and were looking forward to a new season that started off promising,” Rankine adds. “When the virus hit and saw the May Festival of the Arts canceled, it was deflating to all of us.”

Art is available for purchase directly from the artists. Visit the Facebook event at https://www.facebook.com/Brews-online-art-exhibition-115300743496377.

"For May I had planned the 'Inspired' exhibition to coordinate with the Eureka Springs May Festival of the Arts," he explains. "It was a group exhibition where I asked the invited artists: Who were their creative influences? Who or what event inspired them to be artists? Did they have a muse? And I asked them to create a piece of work with those influences in mind. They were also asked to write 200 words on who inspired or influenced them. These statements were to be printed out and hung next to their pieces.

"Knowing that it was unlikely Brews would be open the beginning of May and that an opening artists' reception would be out of the question, I decided to organize a Facebook online exhibition where I would post the artists' work alongside their artist statements. Almost all the artists came on board and were excited about the idea.

"We just recently opened Brews up after a major facelift with paint and some minor renovations. Alas, because of social distancing guidelines there will be no art on the walls for the time being," Rankine goes on. "We felt it would not be safe to invite people to wander around table to table looking at art with the virus still happening. I'm hoping this will be the first show on the walls at Brews if we ever get this virus under control."

Meanwhile, the show must go on, even virtually. 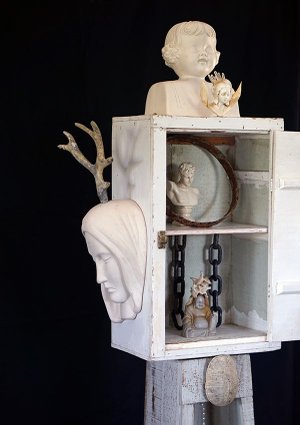 'Blind Desire' John Rankine Found Object Assemblage As a kid growing up in the suburbs of Toronto, I was fascinated with objects -- marbles, rocks, Disney figurines, bones, shells, for example, and according to my mother, would spend hours arranging these objects in some kind of "special" order. At the age of 16, a brilliant English teacher, a course on Carl Jung on his book "Man In His Symbols," and a book featuring the works of Salvador Dali changed the way I looked at art and life. In my early 20s, I discovered the constructed boxes of Joseph Cornell, the photographs of Man Ray and the mixed media collages of Robert Rauschenberg. These art vanguards gave me permission to carry on what I instinctively was already doing -- combining and arranging different objects in an attempt to breathe symbolic life into the inanimate. Found object assemblage is an intuitive art form combined with a basic understanding of color, form, placement and perspective. The process and meaning is deeply personal. The work is open to interpretation, or not, with its meaning best left to the viewer. 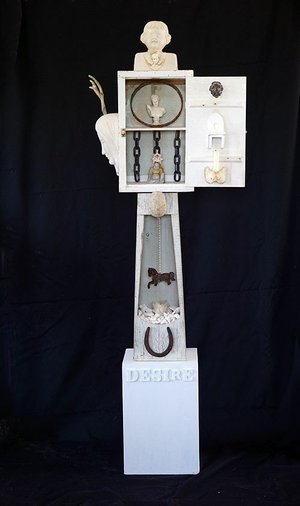 'Blind Desire' John Rankine Found Object Assemblage As a kid growing up in the suburbs of Toronto, I was fascinated with objects -- marbles, rocks, Disney figurines, bones, shells, for example, and according to my mother, would spend hours arranging these objects in some kind of "special" order. At the age of 16, a brilliant English teacher, a course on Carl Jung on his book "Man In His Symbols," and a book featuring the works of Salvador Dali changed the way I looked at art and life. In my early 20s, I discovered the constructed boxes of Joseph Cornell, the photographs of Man Ray and the mixed media collages of Robert Rauschenberg. These art vanguards gave me permission to carry on what I instinctively was already doing -- combining and arranging different objects in an attempt to breathe symbolic life into the inanimate. Found object assemblage is an intuitive art form combined with a basic understanding of color, form, placement and perspective. The process and meaning is deeply personal. The work is open to interpretation, or not, with its meaning best left to the viewer.

'Mother Of Invention' Jeff Danos Mixed Media on Wood Plank When working on art, I often feel like the work takes on a life of its own. While I do my best to finesse it one way or another, to avoid complete chaos, I am ultimately a slave to the inspiration, not its master. In the case of my latest piece, titled "Mother of Invention," many muses are at battle behind the scenes, with no clear victor. If man is a repository of his haunts and experiences, I suspect that his art is sometimes a subconscious attempt to make room for them all in the clown car ... for the brief and captive audience of his lonely circus. 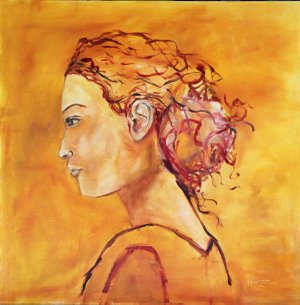 Hilka West-Irvin Oil On Wood When I was a kid, my heroes in life were my grandmother, Sally Field and Leonardo Da Vinci. My grandmother because she gave me cookies and kisses on the forehead. Sally Field because I thought she was the coolest chick I had ever seen (I was 7). She was fiercely independent, funny, intelligent, and she wasn't scared of men. I looked up to her in a way most kids look up to their mom. And my dear Leonardo was the first man I ever loved. I always admired the way Da Vinci captured the essence of the women he painted. My introduction to art through Leonardo Da Vinci was my gateway to freedom of mind and heart. I didn't want to be solitary and confined like a tree. I wanted to be the wind that danced around it. That is what Leonardo DaVinci taught me. 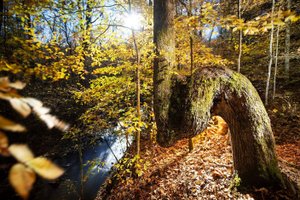 'River, Arkansas' Edward Robison Light Painted Photograph I began my artistic journey as a painter. When I was painting, I almost always sought to paint realistic and sometimes surrealistic scenes. Early in my artistic journey I was inspired by the illumination paintings of many of the 16th-18th century Baroque painters. I was attracted to their use of dark subjects dramatically lit from a single constricted and often unseen source. The combination of painting with light and photography fuses two artistic disciplines I am passionate about and creates the look and feel of the early luminous and chiaroscuro styles I have been drawn to since I began my artistic journey over 30 years ago. https://www.edwardcrobisoniii.com/ 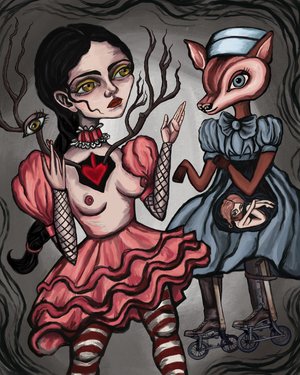 'Lost &; Found' Janalee Robison Digital Painting I gather inspiration from countless visual sources, ranging from movies, artists and travel to toys, advertisements and fashion catalogs. When I was young, I remember being enthralled by the tight composition, curvilinear shapes and bold coloring in the works of Thomas Hart Benton, qualities which have greatly influenced my work to this day. I was also mystified by the Spanish surrealist painter, Remedios Varo, whose narrative, dreamlike imagery was unlike anything I had been exposed to before. She had created what I wished I had dared to draw myself. Presently, I find myself most drawn to my fellow pop surrealists. Pop surrealism nods to pop culture, has a whimsical and playful nature, and often combines humor and the bizarre. https://www.janaleerobison.com/ 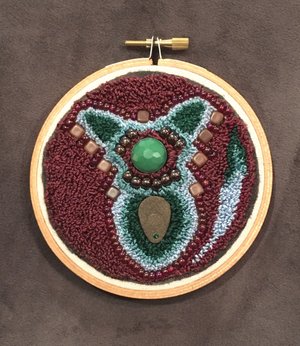 'Cyclopian Fox Totem' Josh Clark Mixed Media Embroidery Like so many of us and so many things, my work here started as one thing and ended up another. This started as an experiment to combine materials and colors together. I intended the central figure to be a jewelry piece, but I quickly lost confidence in its ability to be successful -- until a friend pointed out what he saw as a fox. And as you know, once a thing has been seen, it cannot he unseen. And the choice was made to complete the fox. Who just happens to be a cyclops. 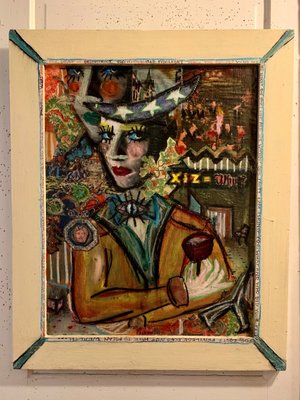 'Whose Blood Did Your Ancestors Spill' Booker Garrett Mixed Media For me the viewing of art has often been a catalyst for change, understanding or sometimes acceptance. I can't predict the reaction or interpretation a viewer will have of my work. I simply sit down with thoughts about something and create. 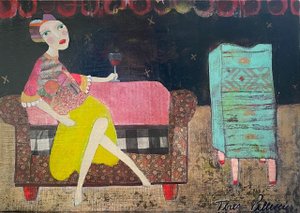 'Room With A View' Teresa Pelliccio Devito Acrylic And Paper On Canvas A number of years ago, I stumbled upon artist Mel McCuddin. Mel is 87 years old and has been painting since his early 20s. He has been described as a "figurative expressionist." He begins a painting with no idea in mind, randomly applying an undercoat and moving from canvas to canvas. At some point, he steps back from a piece and begins gazing at it from afar as you might gaze into the sky, looking for figures to reveal themselves in the clouds. And eventually an idea suggests itself. I have created many pieces over the years using this technique. I call them "magic" paintings." It's almost as if they create themselves. 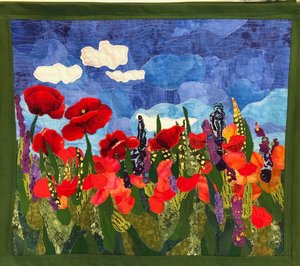 Edwige Denyszyn Art Quilt Artists are the sum of all their experiences. Growing up in France, surrounded by ancient relics, was probably my first imprints. My mother was the next to influence me. She was an haute couture seamstress and made all my stylish clothes while I grew like a weed. But the first great impression was my second grade teacher, Madame Dufour. What a wonderful person she was. Her forte was finding the abilities of each child. What she saw in me was art. What a gift that was! 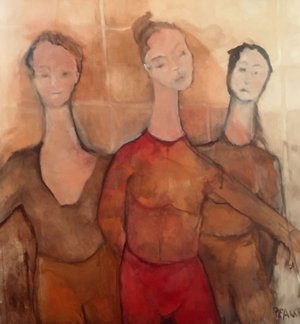 'Dancers' Carol Peacock Oil On Canvas The images I paint come from memories and pictures in my mind. Rarely do I look at anything when I paint! I hope that one day other artists are influenced by my paintings.