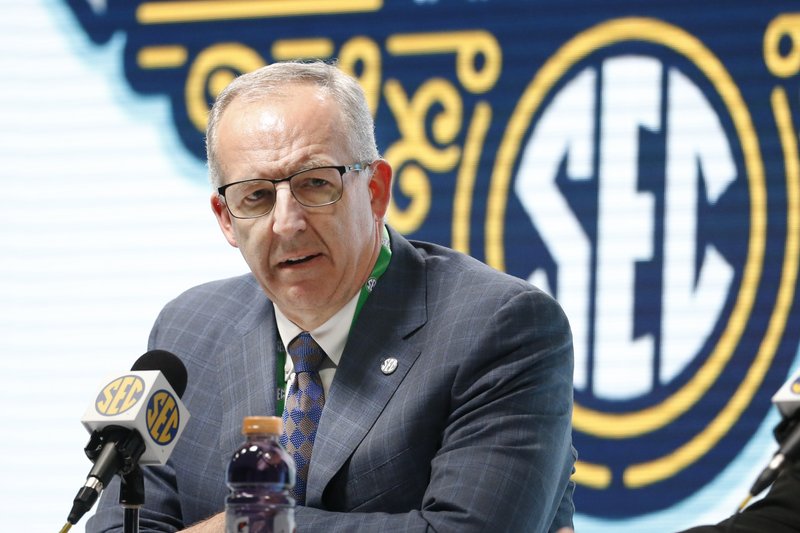 FILE - In this March 11, 2020, file photo, Southeastern Conference Commissioner Greg Sankey speaks at a press conference in Nashville, Tenn. The Power Five conferences spent $350,000 on lobbying in the first three months of 2020, more than they had previously spent in any full year, as part of a coordinated effort to influence Congress on legislation affecting the ability of college athletes to earn endorsement money. The Southeastern Conference was the biggest spender, hiring three lobbying firms and paying them a total of $140,000, according to lobbying disclosure forms reviewed by The Associated Press. (AP Photo/Mark Humphrey, File)

The Power Five conference commissioners are asking Congress to move forward with federal legislation regarding compensation for college athletes.

The commissioners of the Atlantic Coast Conference, Big Ten, Big 12, Pac-12 and SEC sent a letter dated May 23 to congressional leaders. The Associated Press obtained a copy of the letter Friday. Stadium, the online sports network, first reported on the letter.

The letter was signed by John Swofford of the ACC, Bob Bowlsby of the Big 12, Kevin Warren of the Big Ten, Larry Scott of the Pac-12 and Greg Sankey of the SEC.

They encouraged federal lawmakers to not wait for the NCAA process to play out before passing a national law that would set parameters for college athletes to be compensated for use of their names, images and likenesses.

"I don't think it's indicative of anything other than our belief that the five of us bring substantial equity to college athletics and that our brands are strong," Bowlsby said Friday during a conference call with reporters.

Last month, the NCAA's Board of Governors signed off on recommendations that would make it permissible for college athletes to make money for personal endorsements, appearances and sponsorship deals that are currently against the rules. The board acted after California passed a law clearing the way for athlete compensation that takes effect in 2023; other states are moving to to have laws take effect earlier than that, including Florida.

The NCAA hopes to have legislative proposals crafted by November and ready to be voted on in January. Even with that, NCAA leaders have acknowledged the need for congressional help and a national standard that would ward off a wave of state-level NIL laws that are in the pipeline.

Some lawmakers are skeptical of the NCAA's desire to place what it calls guardrails on a compensation model.

College sports leaders have been working for months to get their message to lawmakers about what they believe are the best solutions for athlete compensation, long a thorny issue for the NCAA and its model of amateurism.

The Power Five commissioners said the letter was to ensure lawmakers "hear directly from us, as any NIL changes will have the greatest impact upon the (five autonomy) conferences and our member institutions."

The letter stressed guiding principles that echo what has come from the NCAA and other college sports leaders for months, including a ban on anything that resembles pay-for-play.