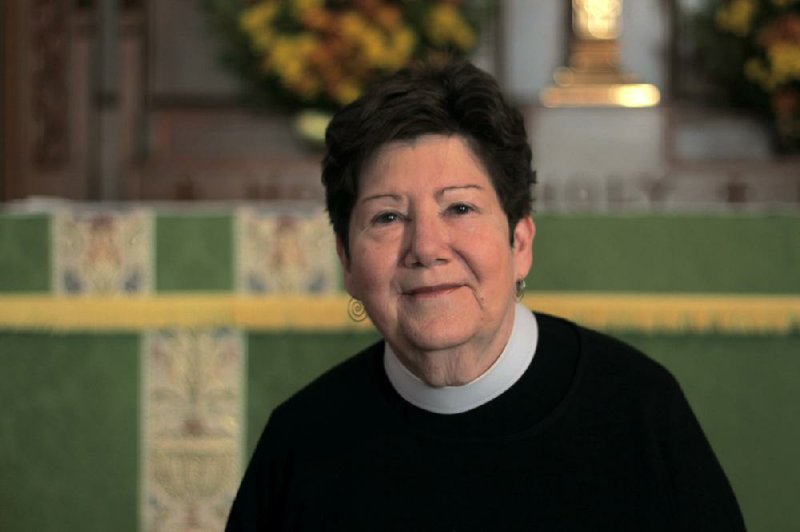 A portrait of Joyce Hardy shows her as the deacon at Christ Episcopal Church, who died earlier this month due to melanoma. Hardy is remembered for her activism, dedication and for having embodied the role of deacon. (Special to the Arkansas Democrat-Gazette)

One of the Rev. Joyce Hardy's favorite things was to stand in Little Rock's Christ Episcopal Church before services and welcome the people entering its narthex.

"I'm getting lots and lots of stories ... that Joyce is the first person somebody met when they came to Christ Church," said the Rev. Kate Alexander, rector of the church, where the 68-year-old Hardy served as deacon from 2005 until her death earlier this month of melanoma. "By the next week she'd remember their name and welcome them again."

Welcoming others was one of Hardy's duties as a longtime deacon in the Episcopal Church but only a piece of her legacy. The social justice advocate has been described as a champion for the marginalized and underprivileged, and as a person who truly found her calling.

Those discerning their calling as ordained ministers in the church are called to be a deacon or a priest, Alexander said. Priests work within the institutional church, while deacons mostly focus on the world outside their church buildings, seeing and helping to meet the needs of their communities.

"It can be a little harder to define what a deacon is, but we sort of say you know it when you see it, and Joyce was clearly that," Alexander said. "Just a deacon through and through, passionate about social justice and anti-racism work and those in poverty, and so she was not interested in the church staying too comfortable."

Among many causes, Hardy worked on a steady basis with St. Francis House, the Episcopal nonprofit in Little Rock dedicated to meeting the needs of the underserved through various ministries. She was involved with the feeding ministry Stewpot Little Rock at nearby First Presbyterian Church. She also advocated for the LGBT community through means such as helping with the Central Arkansas Pride parade.

"Whenever there was a protest at the [Arkansas State] Capitol, she was there," Alexander said.

"What I will remember most about Joyce is that she was the best advocate for the poor of almost anyone I have met," the Rt. Rev. Larry Benfield, bishop of the Episcopal Diocese of Arkansas, said in an email to the diocese's faith members.

"The very people whom society often tends to hide or forget about -- well, they were the people who were first and foremost in Joyce's life," Benfield added.

Born and raised in Oklahoma, Hardy came to Arkansas to earn her bachelor's degree at the University of Arkansas, Fayetteville in 1973 before teaching social studies and later English in Pryor, Okla., becoming a middle-school chaplain and an ordained deacon in 1985.

The Rev. Dennis Campbell, an interim rector at St. Mark's Episcopal Church in Jonesboro, said Hardy came to be considered part of his family after she came to Arkansas in 1989.

The Rev. Peggy Bosmyer -- Campbell's late wife and the first woman to be ordained an Episcopal priest in the South -- and Hardy were colleagues and influenced each other, he said.

An Oklahoma native without immediate family in the state, Campbell said Hardy was often at the home he shared with Bosmyer and their four children, and was often there for holidays.

"All my kids consider her a godparent," Campbell said. "[They] were really influenced by her. I know my twins were maybe in the fifth or sixth grade, and Joyce would come get them and take them to peace rallies. She was certainly a political activist."

Hardy, he said, also could be direct and "had no problems stepping on the toes of the wealthy and the powerful if it meant advocating for the disempowered."

Campbell recalled a sermon Hardy gave at Trinity Episcopal Cathedral during the early 2000s about wealth inequality that he said offended some of the congregation's members.

"She stirred up a bee's nest," he said with a chuckle.

The reaction to that sermon, Campbell said, became an opportunity for the congregation to start a dialogue and discuss concerns and views among poorer and wealthier members, which Campbell said turned out to be a "very positive event."

The Rt. Rev. Larry Maze, Episcopal bishop of Arkansas from 1994 to 2006, first met Hardy after beginning his time as bishop. Maze later made Hardy the diocese's archdeacon, a role she continued in until he retired at the end of 2006.

"Joyce had the clearest understanding of what it means in the Episcopal church to be a deacon," Maze said.

He recalled how they became fast friends through working with Hardy to set up a diaconal program for the diocese.

"She helped me shape [the program]," Maze said. "She understood more than I did about the diaconate."

One of Maze's favorite memories of Hardy came a few years ago, when he visited from where he now lives in Frankfort, Ky., and the two rode together in the backseat of a convertible during a Central Arkansas Pride parade, in honor of what he said was their work for LGBT causes.

"It was such a wonderful moment, for us to be sitting there on the back of a convertible waving to friends that we knew and [who] loved her," Maze said. "Her energy was wonderful ... it was just fun.

"When Joyce had fun, she had lots of fun. That's why people loved her."

"She did it so well," Gray said of the readings, which she said transitioned to Zoom once the congregation knew Hardy's illness was worsening.

"Someone said [during a teleconference], 'Joyce, will you read the Gospel?'" Gray said. "Little did we know that would be the last time we would hear her."

Her cousin, Jack Hardy of Pryor, Okla., said one of the things he will miss most about Hardy is that she was an "encourager."

"I think her life was her involvement in the church," he said, recalling that during a visit Alexander told him that Joyce had a lot of friends and "they would tell you that Joyce took care of them."

"I think her friends took care of her as well, and I would want them to know that we are thankful that they did."

Hardy will be given a funeral at 1 p.m. today at Christ Episcopal Church. It would be the church's first livestreamed funeral because of the coronavirus pandemic.

"Joyce found her calling as a deacon, and I will miss continuing to be inspired by her exemplary life of service," Benfield said in his email to Arkansas Episcopalians. "May God receive her into the glorious company of the saints in light."

Print Headline: Late deacon was the face of LR church