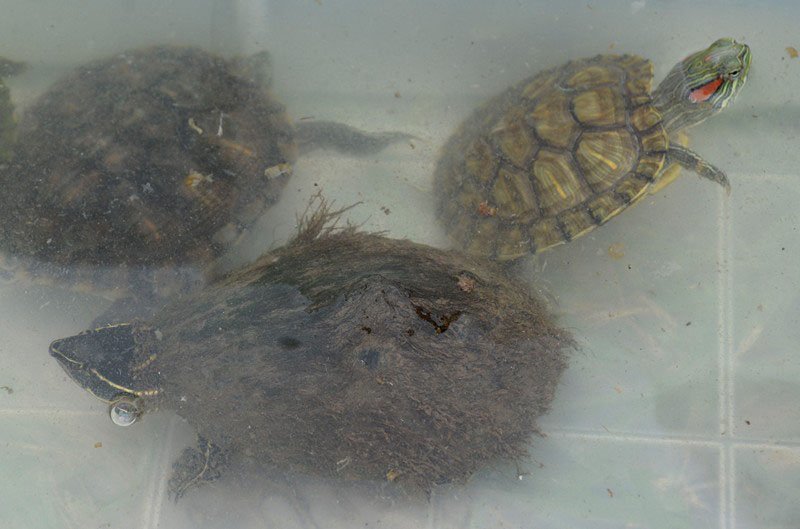 A musk turtle with algae growing on its shell swims in a tub with red-eared sliders before release. Musk turtles (also called stinkpots) can emit a foul-smelling odor released from glands on their plastron, the bottom half of their shells. (Courtesy Photo/Amanda Bancroft)

Quite unexpectedly, like something out of a fairy tale, the old male turtle swam back to the banks of the pond where he had just been released. Temporarily postponing freedom, his head broke the surface, and he stared at us for a long moment, perhaps to say thanks or goodbye -- or to see if we offered a to-go meal to accompany him on the next chapter of his life. Then he submerged, reversed direction, and headed for deeper waters.

He was just one of hundreds that wildlife rehabilitator Joyce Hicks has cared for in recent years. A certified Master Naturalist transplanted from Texas, Hicks moved to Arkansas five years ago and joined the Northwest Arkansas Master Naturalists chapter. Her Bella Vista home is also home to permanent and temporary turtle residents acquired over years of rescuing turtles and tortoises. She creates natural habitat enclosures suited to the needs of their occupants: burrowing places for box turtles, ponds for aquatic ones. 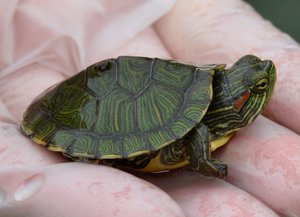 Turtle and tortoise rehabilitator Joyce Hicks holds a hatchling red-eared slider before release at a protected conservation property near Fayetteville. Although this one may look tiny, according to herpetologist Kory Roberts, the smallest turtle in the USA is the bog turtle, and the smallest in Arkansas is the mud turtle. (Courtesy Photo/Amanda Bancroft)

During a recent release at a protected conservation property near Fayetteville, Hicks explained that as long as they're healthy native species, mobile and can successfully hibernate and find food, she can release them. Last year alone, Hicks received 100 turtles. Each of them has a back story of how they came to be in her care.

Cinderella, a box turtle, came to her with a severe respiratory infection and is now doing great. She was lovingly released into a forested area away from highways and dangerous cars. Turtles often get mangled by lawnmowers or run over by cars, which cracks or fractures their shells. Hicks epoxies their domes and helps them regain mobility if their legs were injured.

Ninja, a young snapping turtle, was taken from the wild but was too aggressive, so the owners surrendered the turtle to Hicks. During Ninja's release at the pond, Hicks carefully placed the snapper on the banks, telling it not to jump and bite -- a favorite pastime of this individual. Ninja immediately swam into the murky water, pausing for a few moments to surface and breathe. Snappers are omnivores and keep waterways clear by eating algae and carrion. 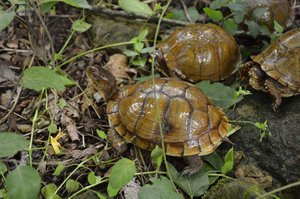 Three-toed box turtles are released into the woods after rehabilitation. Box turtles are so named because they can pull their extremities in and close the front and rear halves of their shells to better protect themselves. (Courtesy Photo/Amanda Bancroft)

A young red-eared slider's release took longer. "Cowboy was taken from the wild and kept without proper food, light and temperature for a year. They surrendered him to me because of his carapace (top shell) growing upward instead of the normal downward," Hicks explained, holding Cowboy for me to see his namesake "hat" appearance. His hat-shaped shell became deformed due to metabolic bone disease, which in Cowboy's case was caused by improper nutrition and lack of access to sunlight. After struggling in the shallow waters, Cowboy investigated leaves and twigs curiously. Eventually, he submerged, and we lost sight of him.

A tiny hatchling, smaller than the palm of one's hand, was vividly colored with patterns of yellow, green and red that will fade with age. It so quickly ran for the cover of water that it was impossible to get a clear photograph. The other small sliders were equally eager to begin the next chapters of their lives.

An eastern musk turtle, one of the smallest turtles in Arkansas after the mud turtle, had been brought to Hicks because the finder thought it was a snapper with worms. Actually, she was a musk turtle with leeches, which were removed before her release at the pond. Her unique shape resembled a hedgehog, her shell like the husk of a coconut. Algae and plants often grow on aquatic turtles' shells after they've spent a long time in the water, and this helps provide camouflage. 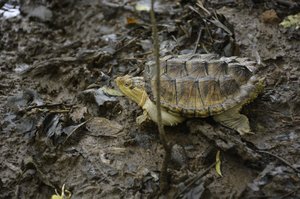 Ninja, a young common snapping turtle, before release at a pond. Alligator snapping turtles are rare and mostly found outside of Northwest Arkansas. If you see a snapper, it's probably a Common Snapping Turtle. They are omnivores, and their diet includes carrion and algae, which keeps ponds and waterways clean. (Courtesy Photo/Amanda Bancroft)

After apprenticing with Lynn Sciumbato of Morning Star Wildlife Rehabilitation Center in Gravette, Hicks became certified and licensed with the Arkansas Game and Fish Commission. She only accepts native, wild turtles, not exotic ones. Working exclusively with turtles provides some benefits, among them not working round-the-clock to feed baby bunnies and other more demanding species. Plus, she doesn't have to get a rabies shot!

"Turtles are good patients and very tough creatures," Hicks said. "Some are very shy; others are pretty bold. They each have their own personalities!"

This was obviously true as we released many box turtles -- some timidly frozen on a rock, others boldly exploring the forest -- and watched the differing reactions of aquatic turtles like Ninja and Cowboy.

The AGFC has a 24/7 hotline for wildlife rescue at (800) 440-1477 and also maintains two PDF lists of licensed Arkansas rehabbers -- one for those who accept only birds and another list for those who accept animals other than birds. These can be found on their website at agfc.com. If you've found a sick or injured wild native turtle, contact Joyce Hicks, Northwest Arkansas Turtle Rehabilitation Center, (972) 571-8247.

Readers know Amanda Bancroft for her column "Making Ripples," which appears in The Free Weekly and What's Up! Email her at [email protected] 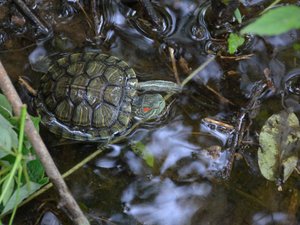 A young red-eared slider makes a swift swim to freedom at a pond. (Courtesy Photo/Amanda Bancroft)

World Turtle Day was May 23, so it’s a perfect time to learn about native wild Arkansas turtles and do what we can to help them.

• If you see a turtle traveling across a busy road or parking lot, carry it across in the direction it was facing until you reach a safer location.

• Another way we can help turtles is to never remove them from the wild to keep as pets.

• If you do have a pet turtle that you can’t keep, surrender it to a wildlife rehabilitator for evaluation before release. Exotic or sick turtles should not be released into the wild.

• Did you know turtle shells are a living part of their bodies? They can feel us touching them and detect pain, so don’t engrave or cut their shells. Painting shells is also bad for turtles.