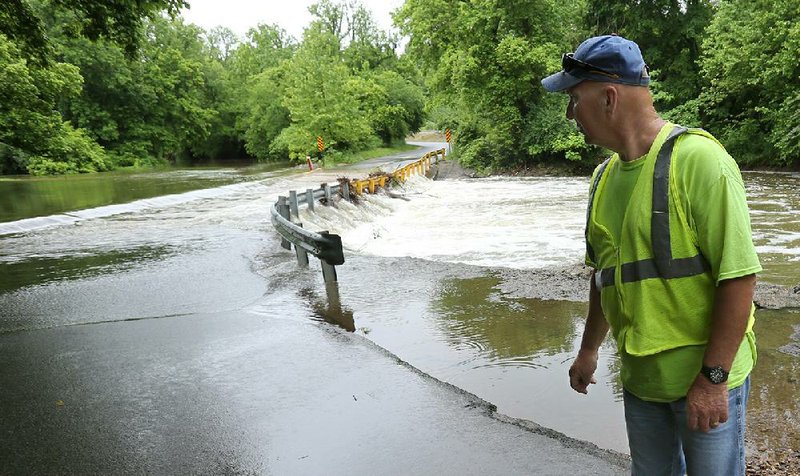 Terry Franks, with the city of Johnson Public Works, monitors the level of water and debris from Clear Creek Tuesday, May 26, 2020, running over the low water bridge on Ball Street. Heavy rains in Northwest Arkansas caused the closure. When the water recedes and the debris is removed the street will be reopened. Check out nwaonline.com/200527Daily/ and nwadg.com/photos for a photo gallery. (NWA Democrat-Gazette/David Gottschalk)

Despite steady rainfall, Northwest Arkansas received a fraction of what meteorologists anticipated during the early part of the week, so the risk of severe flooding throughout the state isn't as high as originally feared, meteorologists said.

A flash flood watch is still in effect for much of the state through today, and could be extended as the rainfall continues, according to the National Weather Service.

Joe Sellers, a forecaster for the weather service in Tulsa, Okla., which covers Northwest Arkansas, said the Fayetteville area received only 1 inch of rain as opposed to the predicted 3-5 inches, which could have been more problematic for communities along the Arkansas River.

"Fortunately, we didn't get the amount of rainfall we thought me might," he said. "The rain that we did get didn't overload the rivers.

"As long as there is enough of a break in between storms and the [U.S. Army Corps of Engineers] manages the rivers, we should be OK. They've been able to do that, so there hasn't been a problem." 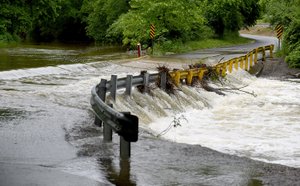 Photo by David Gottschalk
Water and debris runs over the low water bridge Tuesday, May 26, 2020, on Ball Street in Johnson from Clear Creek. Heavy rains in Northwest Arkansas caused the closure. When the water recedes and the debris is removed the street will be reopened. Check out nwaonline.com/200527Daily/ and nwadg.com/photos for a photo gallery. (NWA Democrat-Gazette/David Gottschalk)

Flooding remains a possibility along the Petit Jean, Fourche La Fave and Ouachita rivers, according to the weather service, and the Arkansas and Saline rivers could still see some rising.

The weather formation that started to move the rain to Northwest Arkansas shifted more to the east Tuesday, which gave Fayetteville and Fort Smith some relief, according to the weather service.

But because of that looming system, a flash flood watch remains in effect for portions of central, north-central and southwest Arkansas.

Tabitha Clarke, a National Weather Service hydrologist in North Little Rock, said the abundance of rain in recent months raises the hazard level in those areas.

"It isn't going to take a lot to cause a flash flood," she said. "That's because we've had so much rain. So people who are out camping near rivers should pay attention to that."

Melody Daniel, a spokeswoman for the Arkansas Division of Emergency Management, said flash flooding can affect any area, whether it's high-elevation or low-lying, if enough rain gets dumped in a short amount of time. 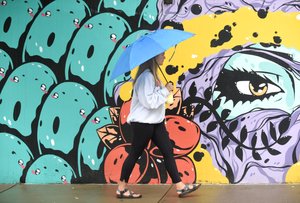 Photo by David Gottschalk
Allison Vincent, a recent graduate of the University of Arkansas, passes by a mural Tuesday, May 26, 2020, on the east facing side of The Academy at Frisco apartments in Fayetteville. The large mural, painted by artist Tiger Sasha in the summer of 2018, has two pieces with one 60 feet in length and other 80 feet in length. (NWA Democrat-Gazette/David Gottschalk)

"Flash flooding can be an issue regardless of topography or terrain," she said. "River flooding is where we would have different counties working on different things. Flash flooding is not as predictable. Everyone should pay equal attention to that."

The rain patterns are expected to "push out" of Arkansas sometime Friday, which will lead to a weekend of clearer skies, Clarke said.

Faulkner County's County Judge Jim Baker said he met with the Corps of Engineers on Tuesday and was told the Arkansas River "doesn't pose a big problem."

His county usually gets about 50 inches of rain for the year. As of mid-May, it had already seen 35 inches, he said. 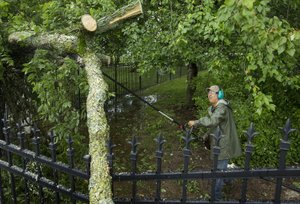 Photo by Ben Goff
Adolfo Lozada with Compton Gardens and Conference Center helps Tuesday, May 26, 2020, as staff clean up a downed American elm tree at The Peel Mansion Museum & Heritage Gardens in Bentonville. The tree was already compromised, and staff were planning to remove it, but severe storms Monday brought the tree down instead. Go to nwaonline.com/200527Daily/ to see more photos. (NWA Democrat-Gazette/Ben Goff)

"We were getting concerned that we'd start to see some problems with the river, but [the corps] felt like we're in good shape here," Baker said. "I feel more comfortable knowing that."

There is up to a 60% chance of rain for Central Arkansas today, Thursday and Friday, meteorologists said. For the weekend, the forecast calls for sunny skies and high temperatures in the low 80s.

By next week, the typical hot weather that encompasses the state is expected to come and stick around for a while, Clarke said.