We followed the morning routine. We leashed the girls together, three terriers on a string, and I hit the button to raise the garage door so Karen could take them out.

I didn't even see it as it went right past me, through the quarter-open door. Karen did.

What flew in the house? A bug?

I did not contradict her, but I doubted her. Surely, even in my dim and grainy morning mind I would have apprehended a bird flying past my head. But I went back in and switched on the living room light and made a quick scan. There was no furiousness, no batting of wings. I was about to open the door and tell my love she was mistaken, that there was no bird in the house when I saw it perched on the window sill alongside a row of toy cars. Calmly watching me.

So I stuck my head out the door and said I've got this, you and the girls go on and have a nice walk. I will get the bird out of the house. Don't worry about it.

I tried to sound confident when I said this, for I am not a hapless human being. I can change a tire. I can parallel park. And once, with the help of my good neighbor Larry, I removed an unwanted raccoon from my sunroom, though that took about an hour, and some (of my) blood was shed in the process.

Birds get into buildings all the time, so often that folklore has been erected around the event. Different cultures believe it means different things; a bird in the house can be lucky or a harbinger of doom. If the bird is white and/or dies in your house, that's bad. If the bird flies in from the north, tragedy awaits. If it flies in from the south, the harvest will be good. If it comes --as ours did--from the east, well, ooh la lah. True love.

I've seen birds in buildings before; they used to get into my high school gym, and on a couple of occasions into our newspaper office. But I had no clear idea how to safely and quickly remove one from a house.

Still, how hard could it be? A tiny bird does not present the same magnitude of problem as a 40-pound wild mammal. They can make a mess, they can be annoying, but the worst-case scenario is probably that they panic and bash themselves against a window with enough force that they injure themselves or even break their neck and die. Which, while not a good outcome for the bird, is nothing I couldn't handle with a broom and a dustpan.

But that didn't need to happen. All I really needed to do was to provide the bird--a Carolina wren, my Facebook birder friends would later confirm--better options than staying in the house. I could take off some screens and open windows and doors.

As I did this, C.W. remained perfectly still but for the occasional flick of his (her, its, their) eyes in my direction. And after I'd opened up the house, he remained there, preternaturally still, as though he belonged there. Maybe he enjoyed the gentle breeze. Maybe he had no particular place to go. Maybe, and I don't like to think this, he was seized with a paralyzing fear of his new situation. I don't know much about birds, but I know they are not stupid and that they are right to be suspicious of us. We throw rocks at them. We scuttle their habitats. We represent an existential threat.

I did not think I had much chance of getting this bird to trust me.

I did not want him inside the house when the girls returned, for a couple of reasons. First of all, because it would mean I had failed to handle a situation. I would have disappointed Karen, who would have probably said, "Away, little bird" and watched it fly out the window. I could imagine the dogs chasing the bird.

At our old house, with its big, semi-wooded backyard, Audi racked up quite a few bird kills; once every two or three months she'd carry in a blue jay or a robin and deposit it as tribute on the bedroom floor. Maybe she misses her murdering ways, maybe she would be happy to see the bird.

I couldn't be accessory to that.

I suppose I could have yelled at the bird to get out, made to grab it and it would have moved, but somehow none of that seemed necessary. I didn't want to frighten the bird any more than it was already frightened. I wanted to gently prod it out of the house, as one might a recalcitrant 30-year-old with a doctorate in art history. I didn't want to traumatize it, but I understood the dangers of it becoming too comfortable.

I also didn't want to get too close, to give it a chance to fly at me and peck my eyes out. (My reference for this is the scene in Hitchcock's The Birds where Jessica Tandy goes to her neighbor's farmhouse and finds him dead in his bedroom with his eyes pecked out. Hitchcock reveals the corpse with three quick cuts--feet, body, face--that feed nightmares and should be used in film classes as a example of how to build and release cinematic suspense in less than two seconds.) The fear is irrational, but real.

So I got the duster wand that extends to 12 feet and has a soft spiny thingy at its end and reached it toward the bird, hoping it would fly backwards out the open window. (Thinking that, if I have to, I can push it out.)

One of the soft spines almost touched the bird before he moved. He fluttered straight up and then turned and bumped into the upper half of the window, the part that wasn't open. Then he flew to the other open window and bumped into the glass above it as well. Then, for reasons that elude me, he flew straight into the door, rather than out the open doorway.

It was at this point I began to reconsider my views on the intelligence of birds, or at least this particular Carolina wren. I don't think he would have made the cut for the Cinderella-dressing team. As he lay there stunned on the floor I moved the soft spiny thingy toward him. Instead of flying out the door, he flew into the kitchen and crouched behind the toaster. Sigh.

I was starting to feel like Buffalo Bill in The Silence of the Lambs: "If it won't fly out the door/It gets the spiny ball once more."

It shot out of the kitchen, ricocheted off a light fixture and finally lit on the floor, in disgusted, defiant defeat in a corner. "Go ahead and stomp on me," he sneered.

But I didn't want to stomp on him, I just wanted him to find happiness in the wider world outside. Through the doorway a mere seven feet away. Spiny ball again. Closer it crept, inch by inch. Somehow he summoned a last-chance power drive from the very bottom of his inner depths and flung himself upward and into the door. He bounced off, outside! Onto the porch. I slammed the door behind and quickly closed all the windows.

I have not seen the poor Darwin Award winner since.

Unless those were, and they probably weren't, feathers around Audi's mouth. 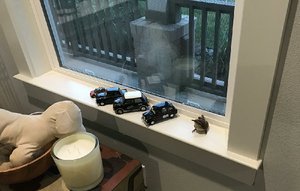 This feathered visitor found out it’s hard to leave when you can’t find the door. (Arkansas Democrat-Gazette/Philip Martin)