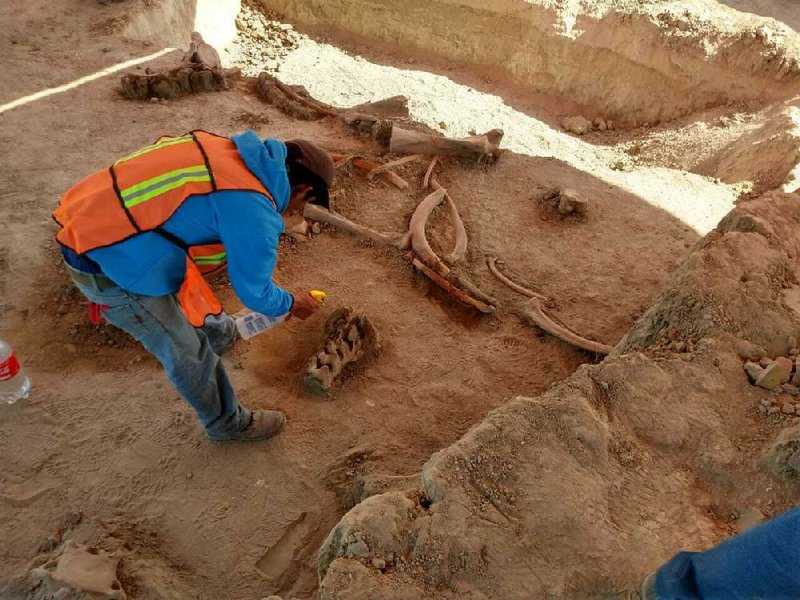 An archaeologist works at the site of an old air base north of Mexico City where the bones of about 60 mammoths have been uncovered. (AP)

MEXICO CITY — Archaeologists have found the bones of about 60 mammoths at an airport under construction just north of Mexico City, near human-built ‘traps’ where more than a dozen mammoths were found last year.

Both discoveries reveal how appealing the area — once a shallow lake — was for the mammoths, and how erroneous was the classic vision of groups of fur-clad hunters with spears chasing mammoths across a plain.

For the moment, however, Mexican archaeologists are facing a surfeit of mammoths, almost too many to ever excavate.

“There are too many, there are hundreds,” said archaeologist Pedro Sanchez Nava, of the National Institute of Anthropology and History.

The institute began digging in three large but shallow areas in October, when work started to convert an old military airbase into a civilian airport. In about six months, the bones of 60 of the huge, extinct herbivores were found, and Sanchez Nava said that pace — about 10 mammoths a month — may continue. The airport project is scheduled for completion in 2022, at which the dig will end.

The institute said hunters may have chased mammoths into the traps.

LONDON — The coronavirus pandemic is interrupting immunization against diseases including measles, polio and cholera that could put the lives of nearly 80 million children under the age of 1 at risk, according to a new analysis from the World Health Organization and partners.

In a new report issued Friday, health officials warned that more than half of 129 countries where immunization data were available reported moderate, severe or total suspensions of vaccination services during March and April.

“Disruption to immunization programs from the covid-19 pandemic threatens to unwind decades of progress against vaccine-preventable diseases like measles,” said WHO director-general Tedros Adhanom Ghebreyesus in a statement. The report was also produced by UNICEF, the Sabin Vaccine Institute and vaccine alliance GAVI.

UNICEF reported a significant delay in planned vaccine deliveries because of lockdown measures and a dramatic reduction in the number of available flights. More than 40 of Africa’s 54 nations have closed their borders, though some allow cargo and emergency transport.

WHO said it would issue advice next week to countries on how to continue providing vaccination services safely during covid-19.

ANKARA, Turkey — Authorities in Turkey’s western city of Izmir have detained an opposition politician after she shared videos of an Italian anti-fascist song being blared out of mosques’ loudspeakers instead of the call to prayer, the country’s state-run agency reported Friday.

The Turkish version of the song “Bella Ciao” was broadcast for a few minutes from several mosques in Izmir earlier this week, Turkish media reported. The incident, which occurred during the holy Muslim month of Ramadan, caused outrage in the country.

Ozdemir has denied any disrespect to religious values and said she shared the videos because she wanted to draw attention to the incident.

Authorities say the system that broadcasts the calls to prayer in mosques in Izmir was “sabotaged” and are investigating who was behind the act.

The song, used by Italian left-wing partisans during World War II, is popular among left-wing groups in Turkey and is frequently played at their gatherings.

CAIRO — A fiery head-on collision in Sudan between a truck carrying passengers and a tractor-trailer killed 57 people and left more than 20 injured on a highway in the country’s Darfur region, state-run media reported Friday.

A police statement said the crash took place late Thursday in the town of Shangil Tobayi in North Darfur province.

A large truck crashed into the tractor-trailer transporting a number of smaller cars, causing both vehicles to flip upside down and “burn completely,” the SUNA news agency reported. It did not provide further details on the cause of the crash. Traffic police laid out the bodies of the victims for a mass funeral in the town.

Some of the injured were in critical condition and taken to a hospital in al-Fasher, the provincial capital of North Darfur, police said.

The truck, which was packed with passengers, was traveling from Shangil Tobayi when it collided with the trailer heading toward the town, located about 620 miles west of the capital, Khartoum, they added.

Automobile accidents are common in Sudan, often the result of poorly maintained roads and poor enforcement of traffic laws.