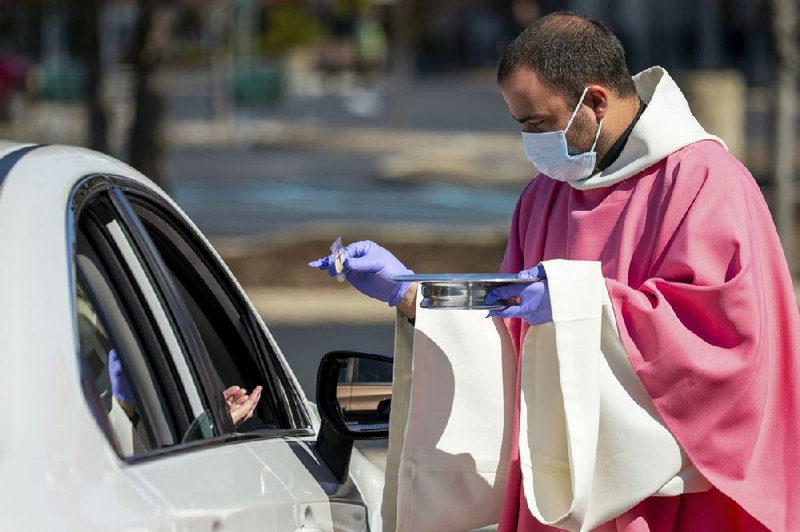 In this March file photo, the Rev. William Mentz, pastor of the Scranton, Pa.,-based St. Francis and Clare Progressive Catholic Church, wears a mask and gloves while distributing prepackaged communion to the faithful attending Mass while sitting in their cars in the parking lot of a shopping center in Moosic, Pa. (The Times-Tribune via AP/Christopher Dolan)

NEW YORK -- Holy Communion will have a different look when in-person worship services resume at the end of May in the Catholic Diocese of Knoxville, Tenn.: The wafers signifying the body of Christ will be placed in the hands of parishioners by priests and deacons wearing face masks and safety glasses.

Similarly striking changes in Communion will take place at Catholic and Protestant churches across the United States over coming weeks as restrictions on large gatherings -- imposed because of the coronavirus outbreak -- are gradually eased.

Many churches that formerly encouraged churchgoers to drink wine from a communal cup will halt that practice, at least temporarily. In some cases, clergy will be instructed to use hand sanitizer before commencing with the sacrament.

The Episcopal bishop of Washington, Mariann Budde, said she and about 60 of her fellow bishops met Wednesday to discuss possible adjustments to Communion and other worship.

"I do think new practices emerge from crises like this," she said. "They come from communities experimenting, pushing the boundaries. You don't know how that process will turn out."

The biggest denomination in the United States, the Catholic church accounts for the bulk of Holy Communion services nationwide.

Under its governance system, decisions on logistical details of Communion are largely left to individual bishops.

Over the past three weeks, at least two sets of guidelines have been issued to Catholic clergy by high-level bodies. There's one main difference: the guidelines from the Washington-based Thomistic Institute says Communion wafers could continue to be placed on a parishioner's tongue or be placed in the hand. Guidelines from the Federation of Diocesan Liturgical Commissions says there should be a temporary ban on receiving the wafer on the tongue.

Knoxville Bishop Richard Stika, in his detailed instructions for the resumption of in-person services, was clear on this point. Reception of the wafer on the tongue "is strictly prohibited at this time," his instructions say.

Churchgoers are instructed to proceed single-file -- and six feet apart -- to a designated distribution point in their church and then receive the Communion wafer in an outstretched palm. There will be no wine for them.

The priest or deacon will wear a face mask and safety glasses during the sacrament, Stika says. Churchgoers will be instructed to wear face masks throughout the Mass that they should remove only for the moment they receive and consume the wafer.

At Ste. Rose de Lima Catholic Church in Chicopee, Mass., pastor William Tourigny is awaiting word from state officials on when in-person services can resume, but he has already made decisions about Holy Communion. Early in the coronavirus outbreak, he prohibited the "on the tongue" option, sticking by the decision despite complaints from some congregants.

As for parishioners drinking Communion wine from a communal cup, Tourigny says he eliminated that during the H1N1 flu outbreak of 2009.

Drinking from a communal cup was in practice prior to the pandemic at Saint Ambrose Catholic Church in Brunswick, Ohio, but that will be halted when in-person services resume, said the pastor, Rev. Bob Stec.

Receiving the wafer on the tongue will still be permitted, but only for churchgoers who insist on it.

"While it is still their option, we would ask them to receive in the hand as a way of offering care and support for the ministers," Stec said via email.

In the Archdiocese of Chicago, longtime churchgoer Mary Anne Hackett, as president of Catholic Citizens of Illinois, has been urging Cardinal Blase Cupich to move more quickly to reopen churches.

'SO HAPPY TO RETURN'

She says most Catholic churches in the area served the Communion wafer on the tongue, not to the hand, but she's open to whatever policy might be implemented.

"The people will be so happy to return to church that they'll be ready to comply with whatever the priest asks," she said.

Among Catholic and Protestant congregations, there has been lively debate over certain Communion practices employed while in-person services were banned. Some ministers administered drive-thru Communion to congregants arriving at outdoor venues in their cars. Among United Methodist Church bishops, there was disagreement as to the propriety of celebrating Communion during online services.

The president of the United Methodist Church's Council of Bishops, Cynthia Fierro Harvey of Baton Rouge, said Communion practices vary from church to church. Some serve grape juice in small individual cups along with a wafer or piece of bread; in other churches worshippers dip their bread into a communal cup in a process known as intinction.

Harvey said many United Methodist churches might choose not to serve Communion at first when in-person worship resumes, then would grapple with decisions such as whether to eliminate intinction.

The Evangelical Lutheran Church in America, with about 3.5 million members and one of the largest mainline Protestant denominations, recently issued guidelines on Communion and other matters to help its 9,300 churches resume in-person services.

The guidelines recommend against serving Communion until gatherings of more than 50 people are allowed. The people administering the sacrament are asked to use hand sanitizer immediately before doing so, preferably in full view of the congregation.

"Common cup and intinction are not recommended," the guidelines say. "If distributing wine in small glasses in trays, ensure that the glasses are spaced far enough apart to minimize people's touching of other glasses."

The Evangelica Lutheran Church's presiding bishop, Elizabeth Eaton, said the recommendations are not binding, and decisions are left to individual pastors.

Budde, the Episcopal bishop of Washington, said most churches in her diocese traditionally used a communal cup for distribution of the Communion wine. She says that practice will almost certainly be halted, at least in the early stages of resumed in-person worship.

"We can't do some of the things that make that sacrament familiar to us," she said. "That doesn't mean the presence of Christ isn't with you." 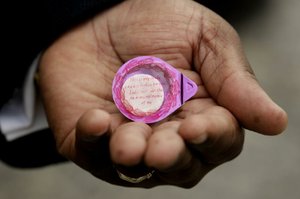 Pastor W.R. Starr II holds individual prepackaged communion wine and hosts as he preaches during a drive-in Easter Sunday service in April in the parking lot of the Faith City Christian Center in Kansas City, Kan. With coronavirus prevention measures shuttering houses of worship, pastors across the country are urging parishioners to use their cars to safely bring their communities closer together. (AP/Charlie Riedel)