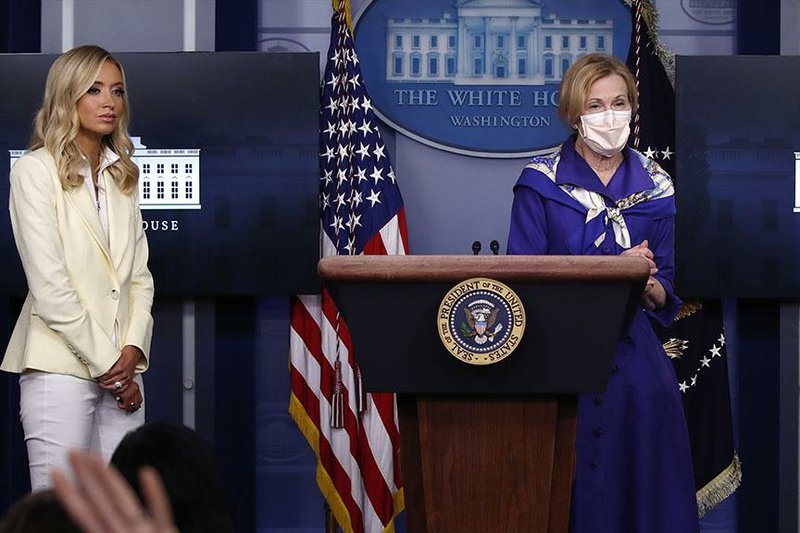 WASHINGTON -- President Donald Trump on Friday labeled churches and other houses of worship as "essential" and called on governors nationwide to let them reopen this weekend even though some areas remain under coronavirus lockdown.

The president threatened to "override" governors who defy him.

"Governors need to do the right thing and allow these very important essential places of faith to open right now -- for this weekend," Trump said at a hastily arranged news conference at the White House. Asked what authority Trump might have to supersede governors, White House press secretary Kayleigh McEnany said she wouldn't answer a theoretical question.

Trump has been pushing for the country to reopen as he tries to reverse an economic free fall playing out months before he faces reelection.

After Trump's announcement, the Centers for Disease Control and Prevention released guidelines for communities of faith on how to safely reopen, including recommendations to limit the size of gatherings and consider holding services outdoors or in large, well-ventilated areas.

Public health agencies have generally advised people to avoid gatherings of more than 10 people and encouraged Americans to remain 6 feet away from others when possible. Some parts of the country remain under some version of stay-at-home orders.

In-person religious services have been vectors for transmission of the virus. A person who attended a Mother's Day service at a church in California that defied the governor's closure orders later tested positive, exposing more than 180 churchgoers. And a choir practice at a church in Washington state was labeled by the CDC as an early "superspreading" event.

But Trump on Friday stressed the importance of churches in many communities and said he was "identifying houses of worship -- churches, synagogues and mosques -- as essential places that provide essential services."

[Video not showing up above? Click here to watch » https://www.youtube.com/watch?v=V4dfXXcgFHY]

"Some governors have deemed liquor stores and abortion clinics as essential" but not churches, he said. "It's not right. So I'm correcting this injustice and calling houses of worship essential."

"These are places that hold our society together and keep our people united," he added.

Dr. Deborah Birx, coordinator of the White House coronavirus task force, said faith leaders should be in touch with local health departments and can take steps to mitigate risks, including making sure those who are at high risk of severe complications remain protected.

"There's a way for us to work together to have social distancing and safety for people so we decrease the amount of exposure that anyone would have to an asymptomatic," she said.

Churches around the country have filed legal challenges opposing virus closures. In Minnesota, after Democratic Gov. Tim Walz this week declined to lift restrictions on churches, Catholic and some Lutheran leaders said they would defy his ban and resume worship services.

They called the restrictions unconstitutional and unfair since restaurants, malls and bars were allowed limited reopening.

Some hailed the president's move, including Kelly Shackelford, president of the conservative First Liberty Institute.

"The discrimination that has been occurring against churches and houses of worship has been shocking," he said in a statement. "Americans are going to malls and restaurants. They need to be able to go to their houses of worship."

But Rabbi Jack Moline, president of Interfaith Alliance, said it was "completely irresponsible" for Trump to call for a mass reopening of houses of worship.

"Faith is essential and community is necessary; however, neither requires endangering the people who seek to participate in them," he said. "The virus does not discriminate between types of gatherings, and neither should the president."

Rhode Island Gov. Gina Raimondo, a Democrat, made clear that churches and other houses of worship will not resume in-person services in her state until at least next weekend and said she was skeptical Trump had the authority to impose such a requirement.

"It's reckless to force them to reopen this weekend. They're not ready," she said. "We've got a good plan. I'm going to stick with it."

New Hampshire Gov. Chris Sununu, a Republican, said he would review the federal guidance, while maintaining that the decision rests with him.

"Obviously we'd love to get to the point where we can get those open, but we'll look at the guidance documents and try to make some decisions rather quickly, depending on what it might say," he said. "It's the governor's decision, of course."

Among the California pastors leading the call for resuming in-person gathering is Danny Carroll of Water of Life Community Church in Fontana, Calif. State officials "don't understand that people of faith need contact, that they need to worship together," Carroll said. "We're trying to close the gap -- thoughtfully, humbly, nicely."

The CDC more than a month ago sent the Trump administration documents the agency had drafted outlining specific steps that various kinds of organizations, including houses of worship, could follow as they worked to reopen safely. But the White House was concerned that the recommendations were too specific and could give the impression the administration was interfering in church operations.

The new CDC guidance suggests steps such as asking congregants to cover their faces and limiting the sharing of worship aids. The CDC document says it is "not meant to regulate or prescribe standards for interactions of faith communities."

Meanwhile on Capitol Hill, reconsideration of jobless aid is fast becoming the focus of congressional debate over the next virus aid package.

Republicans are staking out plans to phase out coronavirus-related unemployment benefits to encourage Americans to go back to work.

"Republicans and the White House are reaching consensus on the need for redesigning the unemployment benefits so they are not a barrier to getting people back to work," Rep. Kevin Brady of Texas, the top Republican on the House Ways and Means Committee, told reporters on a conference call.

Trump and Senate Majority Leader Mitch McConnell met at the White House to discuss the issues.

House Speaker Nancy Pelosi pushed a new $3 trillion aid package through the House last week. The Senate, under McConnell, says there is no urgency to act, and senators are not expected to reconsider more aid until June.

Republican Sen. Cory Gardner of Colorado urged the Senate not to recess unless it considered more aid. "Now is not the time for the Senate to go home," tweeted Gardner, who is among the most politically endangered GOP senators running for reelection in the fall.

But senators left town until after Memorial Day.

McConnell argued that his side of the Capitol led passage of the earlier $2 trillion package. Better to assess how that money is being spent, he said, before approving more. He rejects the new $3 trillion package as a "liberal wish list."

Unemployment insurance, though, was quickly becoming a new priority for Republicans staking out the next aid package.

Brady warned that generous benefits, with a $600 weekly boost during the pandemic approved under the earlier aid bill, would "handcuff" workers and discourage them from returning to work.

Sen. Rand Paul, R-Ky., said, "It was a mistake to make it so high to begin with. It would be a mistake to extend it."

Republicans are hopeful that as states reopen, the economy will improve, lessening the need for more federal funds. But if workers refuse to return to work, they worry companies can't begin to rebound.

Brady proposes giving workers a one-time $1,200 bonus to get back to work. He said conversations were happening at the highest levels of the White House.

Elsewhere, the pandemic accelerated across Latin America on Friday, bringing a surge of new infections and deaths, even as curves flattened and reopening was underway in much of Europe and Asia.

Brazil reported more than 21,000 deaths and 330,000 confirmed cases, making it the third worst-hit country in the world by official counts. Experts consider both numbers undercounts due to the widespread lack of testing.

The virus "does not forgive. It does not choose race or if you are rich or poor, black or white. It's a cruel disease," Bruno Almeida de Mello, a 24-year-old Uber driver, said at his 66-year-old grandmother's burial in Rio de Janeiro.

Meanwhile, the virus is roaring through countries ill-equipped to handle the pandemic, which many scientists fear will seed the embers of a second global wave of infections.

India saw its biggest single-day spike since the pandemic began, and Pakistan and Russia recorded their highest death tolls. Most new Indian cases are in Bihar, where thousands returned home from jobs in the cities. For over a month, some walked among crowds for hundreds of miles.

Also in Russia, state news agencies reported that the authoritarian leader of the southern region of Chechnya was taken to a Moscow hospital with suspected covid-19 symptoms.

Ramzan Kadyrov, 43, has run predominantly Muslim Chechnya with an iron fist since 2007. The Kremlin has relied on him to keep the North Caucasus region stable after two devastating separatist wars. The Chechen parliament speaker insisted that Kadyrov was healthy and denied the reports, which cited an unidentified medical source.

People arriving in the U.K. next month will have to quarantine themselves for 14 days and could face an unlimited fine if they fail to comply, the British government announced Friday.

The quarantine plan has sparked confusion and criticism from airlines, airports and lockdown-weary Britons wondering whether they will get to take a vacation abroad this summer.

Britain did not close its borders during the worst of the country's coronavirus outbreak, which has been linked to more than 36,000 deaths in the U.K. It is introducing its quarantine just as many other European countries are starting to open up again.

Home Secretary Priti Patel said the rules will take effect June 8 and will apply to arrivals from all countries except Ireland, which has a longstanding free-movement agreement with the U.K. Ireland is expected to announce similar measures for people arriving there.

Meanwhile, British researchers testing an experimental vaccine are moving into advanced studies and aim to immunize more than 10,000 people to determine if the shot works.

Friday's announcement came as Chinese scientists who are developing a similar vaccine reported promising results from their own first-step testing, seeing hoped-for immune reactions and no serious side effects in 108 vaccinated people.

Last month, Oxford University researchers began vaccinating more than 1,000 volunteers in a preliminary study designed to test the shot's safety. Those results aren't in yet, but the Oxford team announced it's expanding to 10,260 people across Britain, including older people and children.

If all goes smoothly, "it's possible as early as the autumn or toward the end of the year, you could have results that allowed use of the vaccine on a wider scale," said Andrew Pollard, head of the Oxford Vaccine Group.

The Oxford shot is one of about a dozen experimental covid-19 vaccines in early stages of human testing or poised to start, mostly in China, the U.S. and Europe. Scientists have never created vaccines from scratch this quickly and it's far from clear that any will ultimately prove safe and effective.

This week, drugmaker AstraZeneca said it had secured its first agreements to produce 400 million doses of the Oxford-developed vaccine, bolstered by a $1 billion investment from a U.S. government agency. 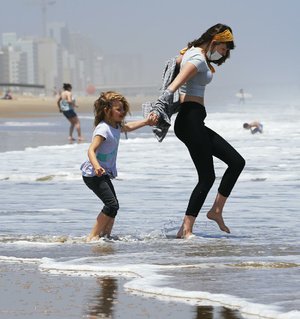